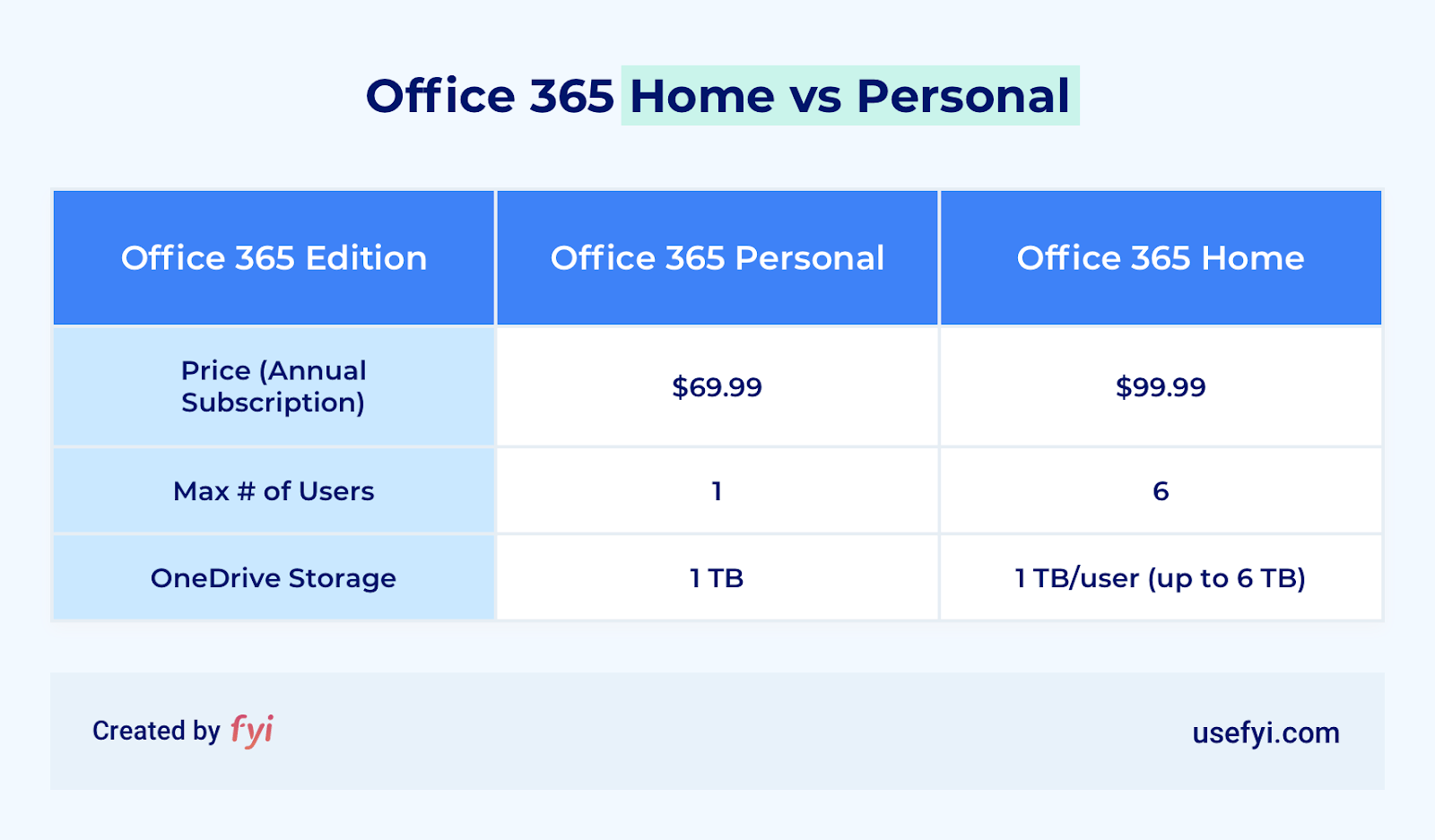 Most folks looking for an Office 365 subscription for themselves or their family compare Office 365 Home vs Personal. These two plans have a lot in common, but there are key differences you’ll want to know before you decide.

There are also other Microsoft products in the same price range that might better suit your needs, depending on what you want out of your productivity suite.

And there are deals to be had if you know where to find them.

Let’s go over your options and how to save as much money as possible. By the end of this post, you’ll have enough info to make a confident and cost-effective decision.

Office 365 Home vs Personal: The basics

Remember when you had to buy the latest version of Microsoft Word on a disk? Nowadays, you can buy and download the digital file in just a few clicks. Or, you can buy the full suite of Office apps as a monthly or yearly subscription service: Office 365.

Think of Home and Personal as the entry-level versions of Office 365. Both of these plans make sense to individuals, small businesses, and families that want access to familiar Office apps like Word, Excel, PowerPoint, and Outlook, but don’t need (or want to pay for) enterprise services and support. Put simply:

Along with the amount of cloud storage, this is the key difference between the two plans. Otherwise, they come with an identical suite of apps and services intended for non-commercial use by people with general office needs.

You get premium desktop versions of the core office apps I mentioned, plus OneNote.

All the apps can be fully installed on your computer, and downloaded to an unlimited number of Android, iOS, and Windows devices (as long as you’re not active on more than five devices at one time).

Importantly, this means your offline access is not limited as it is with the browser-based Office apps, which come free with Office for the Web.

In terms of services, both subscriptions set you up with OneDrive and Skype.

Your Office 365 OneDrive cloud-storage is seamlessly integrated with your Office apps, so it’s easy to store, share, and access your files from anywhere. Features like OneDrive Personal Vault provide individuals with an extra layer of personalized security for sensitive documents. Each OneDrive is personal, so Home subscribers can’t see each other’s files by default.

For Skype, each user gets up to 60 minutes per month to call mobile phones and landlines around the world, saving you money on long-distance calls. Here’s a list of eligible countries.

Finally, with either a Home or Personal subscription, PC users also get Publisher and Access.

Publisher’s advanced layout tools are great for things like reports and visuals if you’re a PC user. For most Mac users, it’s not mission-critical. You’ve already got Apple’s in-house design tools. And though Access is powerful, it’s only useful for a small fraction of home office users.

To sum up, each of these plans are designed to be affordable, but there’s nothing skimpy about what you get. Microsoft wants you to keep subscribing, so the updates are frequent and the premium features performant. That means you’ll always be running the most up-to-date products, services, and security that Microsoft has to offer, as soon as they become available. It’s easy to work remotely and your files are always backed up.

Running Windows 7? Microsoft has deprecated support for this release but will continue to offer security updates for your apps until January 2023. You just won’t get new features. Upgrade to Windows 10 to ensure you have the latest features and improvements.

Office 365 Home vs Personal: What are the differences?

In March 2020, Microsoft announced plans to start rolling out Office 365 Home and Personal plans under new names⁠, Microsoft 365 Personal and Family⁠, which will include new experiences such as an AI-powered expansion to Microsoft Editor, design ideas in PowerPoint, and a Family Safety app. Personal and Family will stay at the same price point as Personal and Home, although it’s not clear yet how much they’ll differ.

For now, the apps and services are the same for both plans. Where they differ is in the number of users and amount of storage.

Use this breakdown to start thinking about Office 365 Home vs Personal:

It’s always best to buy the yearly subscription⁠—it works out cheaper than the monthly fee. And you don’t have to buy it from Microsoft⁠. Shop around. Amazon has been known to sell annual Personal subscriptions for as little as $48, and to offer deals like gift cards. Sites like TechRadar regularly publish posts like this on where to get the cheapest price.

And if you need more OneDrive storage, both Home and Personal subscribers can buy up to an additional 1 TB in 200 GB increments for an extra $1.99 per month. (Note that for Home plans, only the primary account holder can access the additional terabyte.)

How to choose between Office 365 Home and Personal

Since you need to renew your subscription, the pricebreak that comes with an individual subscription is something to consider. Opting for Office 365 Personal will save you $40 yearly compared to Office 365 Home. Of course, that’s only if you need a single user and TB of storage. You could use Personal together with someone else, but with one account, both users will have access to all its data.

If the savings make sense, and you only need one account, keep this in mind:

For multiple users, Office 365 Home is clearly the better choice. It’s great value for money, I can’t think of a situation when it would be cost-effective to buy multiple Personal subscriptions.

If in doubt, start with a month-long free trial.

Other versions to consider

Interested in the collaborative Office apps and services that don’t come with Home or Personal, but still want affordable pricing? Think about Office 365 Business Essentials.

The drawback with Business Essentials is that it doesn’t include the premium desktop apps. That means fewer features in the apps and limited offline access. The major upside? You get Teams, SharePoint, Planner, Yammer and business-class email built on Exchange.

On the other hand, if you’re looking for something truly bare-bones, there’s Office 2019 for Home and Student. This is a one-time purchase rather than a subscription. It comes with Word, Excel, and PowerPoint, which can be installed on one PC (running Windows 10 only) or Mac (the three most recent versions of MacOS).

Let’s compare all these plans side by side: 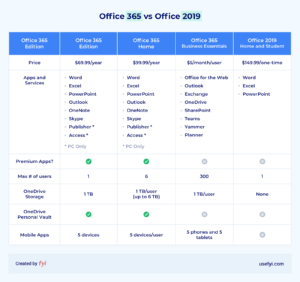 Unless you have really limited needs or specific requirements to use Office on-premise, I’d avoid Office 2019 even though it’s a one-time buy. Unlike Office 365 plans, your software will never get new features and isn’t accessible on mobile devices. It’s old-school, on-premise software that won’t change, even as norms for communication and cybersecurity do.

If you’re comfortable with that, the better buy might be Office 2016, which you can still get from reputable third-party vendors like Amazon. You’ll get the same basic functions at a discount. Don’t worry about the release date⁠—it used to be that Office became considerably more powerful with each new version, but that’s no longer the case. Office 2019 doesn’t offer anything new that you won’t find in Office 365. In fact, it’s arguably less powerful.

Even compared to the other plans, Office 365 Home has the most value when you can split the cost with friends, family, or roommates. It’s our recommendation for the vast majority of users.

A close second would be Office 365 Business Essentials. That’s a good option for people like freelancers who need to interface with clients in the latest collaborative platforms. You can quickly scale up to as many as 300 users⁠—though you do pay per seat, which gets expensive. Office 365 Home, on the other hand, remains the same price for up to six users.

One last thing: Office 365 is free (or cheap) for students, teachers, and nonprofits

If you have a valid school email address, you may be able to get Office 365 Education for free or at a very low cost. The paid plans for students or for faculty and staff are almost identical to Office 365 Personal, but for about the same price, each user gets a four-year subscription.

Microsoft also makes several versions of Office 365 Nonprofit available for qualified organizations. Depending on their situation, nonprofits can get Office 365 as a free donation or at low rates per user.