Even after its purchase by Microsoft a few years ago, GitHub remains a popular platform for developing and hosting code. However, it may not be the perfect host for everyone.

Whether you are wary of anything involving Microsoft or you simply don’t like the GitHub interface, you may want to consider several high-quality GitHub alternatives. We’ll break down all of the top options.

Who Should NOT Use GitHub

GitHub is easily one of the top hosting options for coders and coding projects. However, we also know that it is not the perfect option for everyone. In fact, certain types of people probably should simply steer clear of GitHub entirely.

Those Who Only Believe in Open-Source Software

Microsoft purchased GitHub in 2018. Although Microsoft did not make significant changes to GitHub at the time of purchase, some people simply don’t trust Microsoft. If you believe wholeheartedly in the open-source software concept, you know that Microsoft isn’t always the greatest proponent of open-source.

Those Who Have Budget Concerns

GitHub does have a highly useful free tier with plenty of basic features. However, if you need the higher-end features found in the tiers that carry a subscription price, your costs may add up quickly because GitHub charges by the user.

As we showed in our GitHub review, each time you add a new contributor to your account, you have to make another addition to your subscription. Large teams likely will have high monthly bills because of this.

Those Who Worry About Security Problems

With GitHub, you do run the risk of being the victim of a security breach. Hackers find GitHub a popular target. And some developers will store passwords in their GitHub repositories, placing the system at risk.

If you have extremely valuable code or sensitive intellectual property stored with GitHub, you may want to seek an alternative that has a greater level of security. You also may want to consider a self-host-only GitHub alternative.

Those Who Dislike a Challenging Learning Curve

GitHub is not the best option for novices. You will need to have some experience with the command line and with high-end coding to be able to make the most of GitHub. Its repo search functionality can be a bit challenging to learn to use as well.

Even though you can learn to use GitHub successfully after spending a bit of time with it, you may have little interest in doing this. An alternative option like Bitbucket has a far cleaner interface than GitHub, which simplifies its ease of use.

Those Who Want to Focus on Using Private Repositories

If any of the potential drawbacks to GitHub listed earlier describe you or your organization, here are the eight best alternatives to GitHub that you may want to consider. 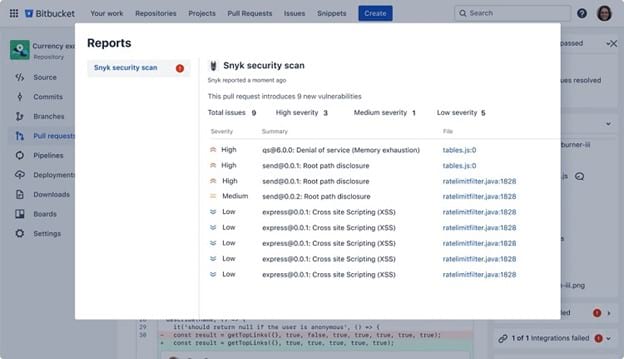 This makes Bitbucket a better option for projects for large companies, while GitHub tends to work better with individual projects designed for the entire open source community. Bitbucket is a stronger choice than GitHub when your business is developing proprietary and private code.

Bitbucket is one of the few GitHub alternatives that can give you a large user base like GitHub, so you can find plenty of help from your fellow users.

Bitbucket and GitHub both charge their customers by the user, and both services have a free version available. However, Bitbucket does have lower price points in its subscription tiers, so you may be able to save some money with Bitbucket, as long as the pricing tier you select meets the feature set that you have been using with GitHub.

If you are someone who doesn’t like the fact that a large company like Microsoft owns GitHub, you aren’t going to find much relief with Bitbucket, however. Atlassian purchased Bitbucket in 2010 and continues to operate it today.

On the other hand, if your team uses other Atlassian tools, such as Jira, Bamboo, or Trello, you’ll appreciate how easy it is to integrate Bitbucket with those tools directly. This can greatly simplify the management of the coding process when using Bitbucket. 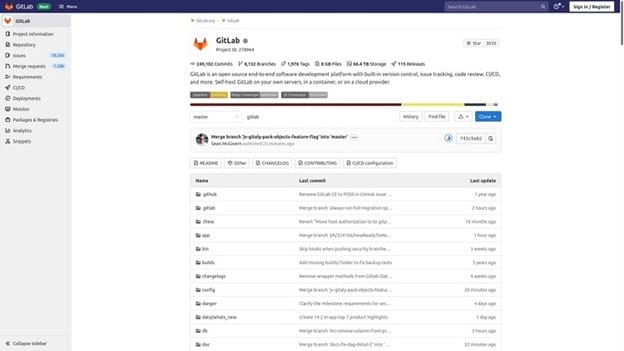 As an alternative to GitHub, GitLab’s greatest strength is its ability to make use of Continuous Integration/Continuous Delivery (CI/CD) as part of its natural DevOps workflow. GitLab builds support for CI/CD directly into the workflow. When using GitHub, you also have access to CI/CD, but you have a greater limitation on minutes than what is available with GitLab.

In our GitLab review, we highlighted the impressive security platform available in GitLab. Security features are part of the entire workflow, giving you an advantage over running security processes after you develop the code.

GitLab is another GitHub alternative that has a large user base, so you can find help from other users as needed.

Additionally, GitLab offers a fully open-source management platform. It is its own company that trades on the NASDAQ exchange, making it a better choice for people who prefer open-source as an alternative to GitHub.

In terms of pricing, both GitHub and GitLab offer a free version that delivers features aimed at individual users. When you want to purchase a version to use with your large team, GitHub is cheaper than GitLab, but GitLab offers the CI/CD minutes advantage mentioned earlier.

Gitea works nicely when you want an easy-to-use alternative to GitHub. Gitea runs using the Go language, which means Gitea does not need as many system resources to run as GitHub needs. This allows it to run efficiently on a wide range of systems and operating systems, including Windows, Mac, and Linux. Gitea will even run on a basic Raspberry Pi system if desired.

It offers a self-hosting option, so it works well for a small business or individual looking to protect its code.

Gitea is a fully open-source option, which makes it a popular choice for GitHub users looking to make the switch after Microsoft purchased GitHub. The Massachusetts Institute of Technology (MIT) holds the license for Gitea.

Anyone can contribute to the Gitea platform, which gives it some benefits and advantages over GitHub for developers who prefer the open-source concept. This also gives Gitea a close-knit community of people who are making improvements to it while they are using it, and they potentially can help you with questions. 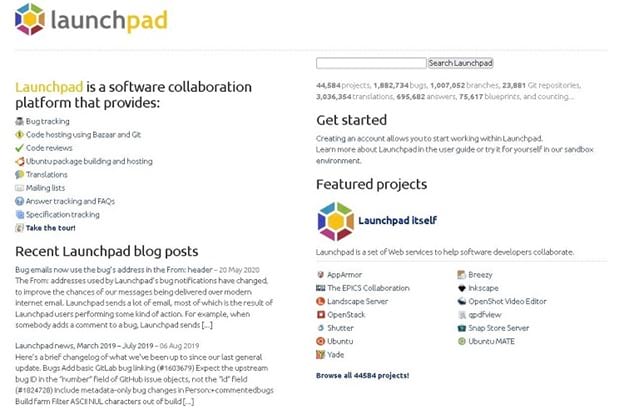 Launchpad has been around for nearly two decades, allowing it to build a collection of very loyal users over the years. This gives you plenty of options for reaching out to the Launchpad community to find answers to any questions you may have.

It offers a simple GitHub alternative, allowing you to host Git repositories as well as import them. Coders are able to develop and maintain their software projects for free using Launchpad, rather than having to pay the subscription fees found with the pay tiers of GitHub.

Canonical, the parent company of Ubuntu, provides support for Launchpad. If you are someone who uses Ubuntu frequently, Launchpad should work nicely running inside this OS. But Launchpad also provides all the support you could want for Git.

One area where Launchpad struggles to match GitHub is its interface. GitHub’s interface is not the easiest option to use, but Launchpad’s interface is so dated that it trails GitHub significantly in this area. 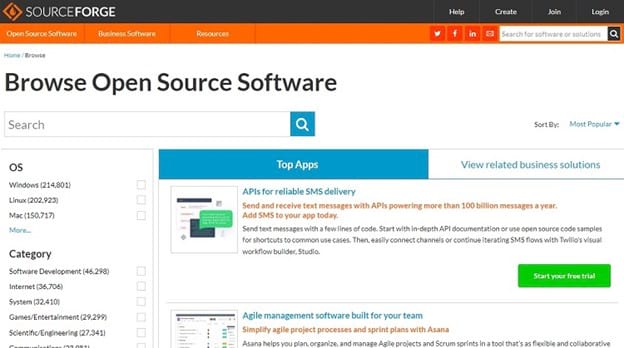 Those who are developing open-source software and who are seeking a high-quality open-source alternative to GitHub will appreciate SourceForge. If you are working on an open-source project, SourceForge gives you the ability to host your project and your code.

Rather than relying on a Microsoft-owned hosting service in GitHub, when you select SourceForge, you will receive a site that developers created using open-source techniques. (However, if you are looking for a site that has no control from a larger company, SourceForge may not be the perfect option for you, as Slashdot Media owns SourceForge.)

SourceForge has a strong community of developers, giving you a nice resource for obtaining help with SourceForge itself. You can review and share your open-source project ideas with these same developers. SourceForge serves as an unofficial home for Linux projects and software distributions, and it has for many years.

Because of recent upgrades to its interface, SourceForge gives developers some strong improvements over GitHub’s interface. SourceForge offers the ability to import GitHub repositories, simplifying the process of migrating away from GitHub.

SourceForge is open-source software that’s free, but it also has its own developed software options for businesses that have a fee. 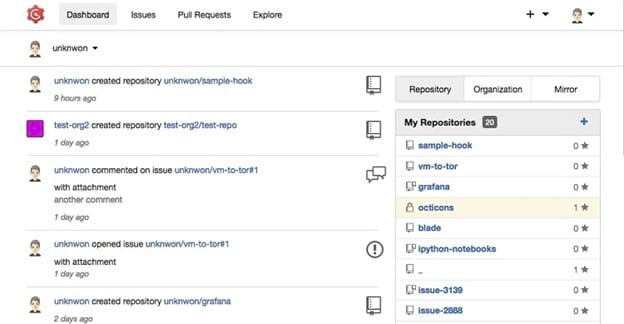 Gogs is a lightweight self-hosted option for your coding projects. It requires only minimal computing resources, and it is an extremely easy-to-install option. It even has the ability to run on a Raspberry Pi computer.

You and your developers will not need to spend a lot of time trying to figure out how to use it or trying to troubleshoot problems, as it is very easy to use. It is an open-source solution that runs under the MIT license.

It emphasizes stability and simplicity, giving it an advantage over GitHub. It makes use of Go, which allows it to easily run on almost any type of computer and with almost any operating system, including Windows, Mac, and Linux. Making use of Go is a major reason why it is able to run without demanding significant computing resources. 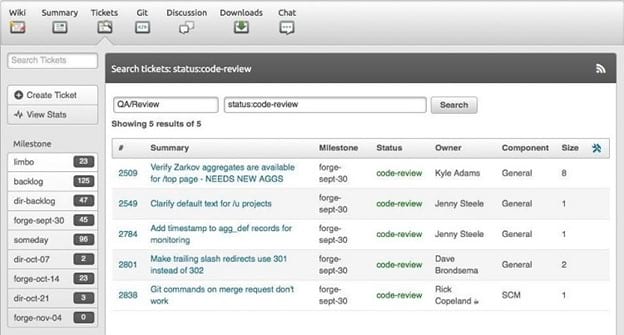 Apache Allura is another fully open-source option, so those who use it can make contributions to the code to improve it. It is part of The Apache Software Foundation.

As a self-hosted option, it has plenty of features, making it a strong alternative to GitHub. Apache Allura offers the ability to manage source code repositories, but it also can help with bug reports and documentation. You can create wiki pages as well as threaded discussions when using Apache Allura.

One of this software’s greatest strengths is its ability to speed up the search process. It will save the searches you perform the most, making it easier to reuse those searches again in the future. 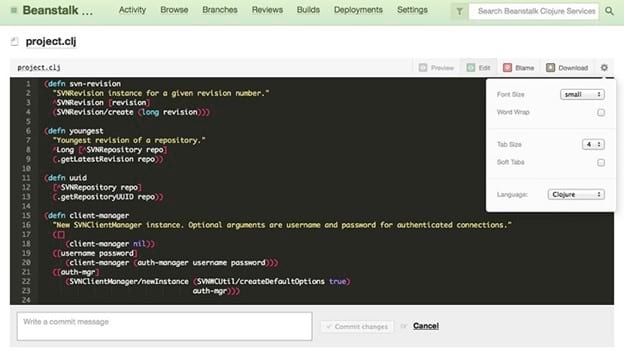 Beanstalk provides a workflow platform that can handle the entire code development process from writing to reviewing to deploying. It offers many of the same code sharing and review features found in GitHub.

One of its advantages over GitHub is that it provides a far higher level of security for your code, as the Beanstalk environment uses encryption at every step. This is an important factor, as Beanstalk’s design encourages coding from anywhere. Developers can create and edit their branches from the browser environment. If you are using WiFi while operating within Beanstalk, you can count on its high levels of security to protect your code.

Beanstalk also provides a cheaper pricing structure than GitHub, as it charges a single price per month, rather than charging per user.

Although GitHub is not the best choice for everyone, it is still a strong option. In our GitHub review, we do recommend GitHub. Should you choose to make use of GitHub, there’s a good chance you will be happy with its level of performance. However, it’s nice to know that plenty of strong alternatives to GitHub are available, should you want to make the migration away from it or in case another tool fits your needs better.