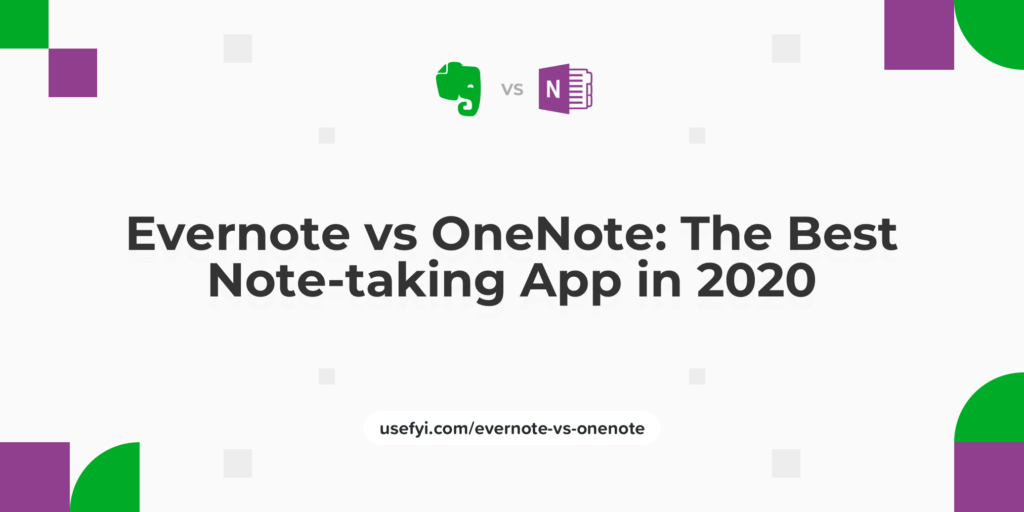 Most note-taking apps do the same things. Save and organize digital notes. Search saved notes, clippings, and files. Sync across multiple devices.

Evernote and Microsoft OneNote both do all these things and more. Both tools let you save typed or handwritten notes, organize your notes into individual notebooks, and clip images, paragraphs of text, and even entire web pages as clippings for later viewing.

What’s interesting about both Evernote and OneNote is that, unlike email, document apps, or even instant messaging tools, note-taking apps aren’t often a core part of most work environments. You don’t necessarily need Evernote or OneNote the way you literally need email. They might not be essential, but they are useful.

But which of these tools is better?

Below, we’ve examined Evernote and OneNote in depth to see which note-taking tool reigns supreme. We looked at several individual categories, and we’ve made our recommendation toward the end of the post.

On the surface, there doesn’t appear to be much difference between Evernote and OneNote. Look a little closer, though, and the differences start to become more obvious. Let’s look at how the two apps compare in terms of:

Both Evernote and OneNote rely on the notebook convention to describe how the two tools manage file organization.

In addition to their central notebook conventions, both Evernote and OneNote also feature tag systems. Evernote’s tags function similarly to tags in WordPress. You can add a tag to any note and search by tags to find thematically relevant notes.

OneNote’s tags work very differently. They’re a lot more interactive and can be used for lots of different things. For example, you can add Reminder tags to a note to be reminded at specific dates and times. OneNote comes with more than 20 preset tags, from To-Do items and Client Requests to Music to Listen to and Book to Read. There’s even a Password tag.

Unlike Evernote, which limits tag placement to the Notes level, OneNote tags can be applied to any organizational element. Any Notebooks, Sections, or Pages in OneNote can have tags applied to them. You can add multiple tags to multiple elements on a page. For example, you could add a Contact tag to an image of a business card you uploaded after a meeting, a Reminder tag to follow up with that person at a specific date and time, and a Client Request tag to the action items you need to prepare for that meeting.

One of the biggest problems with Evernote is that the program itself can become sluggish once you reach a certain number of notebooks. Another major issue is that quick notes aren’t categorized by default, meaning that if you use Evernote to make lots of quick little notes, your file system in Evernote can quickly become a mess of Untitled Notes. For a tool that’s supposed to help us make sense of the information in our lives, this can be frustratingly counterintuitive.

I wouldn’t say tags in Evernote are “better” than tags in OneNote or vice-versa. It all depends on which system feels right to you and aligns with what you want from the tool.

If you intend to use Evernote or OneNote simply to record your thoughts, storage isn’t that important. Individual text notes are tiny in terms of file size. So you don’t need to worry as much about running out of space.

If you intend to save a lot of documents and files, though, storage becomes a lot more important.

In terms of storage, Evernote is quite permissive but does have some hard restrictions:

Evernote’s maximum number of notes, notebooks, and tags is fairly generous. But the 60MB upload limit is very harsh. Even casual users are likely to run up against this restriction pretty quickly, especially when working with larger files such as high-resolution images.

Evernote retired its Plus tier in April 2018, which had a 1GB upload restriction. This forces users to choose between the limitations of the Free plan or 10GB of storage in the Premium plan. There’s no longer any middle ground between these two extremes––a 5GB limit would have been a solid compromise for many users.

The biggest problem with Evernote in terms of storage is the lack of a middle option. It’s either 60MB a month or 10GB a month. This makes sense for Evernote––Evernote’s harsh upload limits on its Basic plan are a powerful motivation to upgrade––but it doesn’t make sense for users.

OneNote’s reliance on OneDrive for storage is a blessing and a curse. It helps keep OneNote largely free and offers generous storage and upload limits. But it also forces prospective OneNote users to sign up for a OneDrive account. This isn’t ideal if users prefer a different cloud storage provider or don’t want to migrate from Google Drive or Dropbox to OneDrive.

If you plan on using either of these tools for simple note-taking, storage won’t be as important. If you need to save larger files or upload a lot of data, OneNote is the clear winner.

Note-taking apps help us record our thoughts. They’re somewhere for our random observations to live. If we can’t find our notes quickly and easily, then there’s not much point in saving anything. This makes search critically important.

When it comes to finding things, Evernote’s search functionality is solid. You can search by keyword or strings, as well as other search criteria such as where and when a note was created, media or attachment filetypes (such as PDFs, images, or audio files), and the people associated with or tagged in a note. Evernote also boasts a wide range of search modifiers that Google power users will find familiar.

With Evernote’s Plus tier no longer available, Evernote has three levels of pricing:

Evernote’s Basic plan will probably be fine for casual users. For even moderate use, however, it’s not really viable due to Evernote’s upload restrictions. It’s worth remembering that this only really applies if you’re going to be saving lots of files and documents.

Evernote’s Premium plan lacks the restrictions of the Basic plan and offers a decent monthly upload limit. But at almost $96 for the year, it’s far from cheap––especially when OneNote offers so much for free.

Evernote’s Business plan is the most robust of Evernote’s plans. Although cost isn’t likely to be as important a factor for larger companies or enterprise teams, it’s still a considerable expense, especially as the number of users increases.

OneNote, on the other hand, is free. It isn’t even available as a premium version. All you have to decide is how much OneDrive storage you’ll need if any.

Even if you don’t need Office or 1,000GB of storage, it’s still cheaper than Evernote’s Premium plan.

According to G2, a website that ranks software products by user reviews and Net Promoter Score (NPS), both Evernote and OneNote perform strongly. Evernote was named a Leader product by G2 in spring 2019 and received an overall rating of 4.4 out of 5 stars across 1,352 user reviews.

Technically, OneNote edges out Evernote––but only just. Evernote received slightly more one-, two-, and three-star reviews than OneNote did, and OneNote received slightly fewer reviews in general. Although this means OneNote beats Evernote narrowly in terms of user satisfaction, it’s too close to be conclusive, so we’re going to call it a draw.

Our Recommendation for Evernote vs. OneNote

Now that we’ve examined each tool in a little more depth, it’s time to declare a winner.

Taking everything into consideration, we have to recommend OneNote.

OneNote gives you everything Evernote can do for a fraction of the price. If you want to do more with your notes, such as add to-do lists and reminders, OneNote can do that, too. If you just want to take simple text-based notes and find them quickly, Evernote might be a better bet.

Evernote is a highly capable tool with a broad range of use cases. However, as a product, Evernote has lost its way in recent years. And it’s very hard to justify the cost when OneNote offers virtually identical functionality at a fraction of the price.

But it’s not just about cost. There’s more to it than that.

Aside from its dependence on OneDrive, OneNote is the clear winner for business users. It looks and feels like other Microsoft products. Some might see this as a negative, but it actually reduces the learning curve.

OneNote is also far superior for combining multiple types of information on the same page. For example, you can create a to-do list, add an image or table, and jot down some notes all on the same page. OneNote’s drag-and-drop interface, tabbed tagging system, and familiar toolbars make OneNote feel like Office might if Microsoft had acquired Notion.

Evernote looks and feels very sleek, but its performance and stability issues are problematic. Evernote has done an admirable job of doubling down on product quality, but some of these bugs have been around for years. For a premium product with a price tag to match, these frustrations are hard to justify.

In terms of writing and editing tools, Evernote has never positioned itself as a document tool. That said, its writing and document-editing tools are sorely limited. Creating quick notes feels anything but and highlights how poor Evernote’s default organizational structure can be. It doesn’t support markdown or HTML either.

Similarly, Evernote is a powerful tool but does a poor job of onboarding new users. Evernote’s tag system is much more flexible and useful than its default notebooks schema. It’s baffling why Evernote would almost completely overlook this aspect of its organizational structure in its learning resources and tutorials.

Of course, Evernote does do a few things better than OneNote.

One aspect of Evernote that really shines compared to OneNote is Evernote’s Web Clipper. This handy tool is available as a separate browser extension and allows users to quickly clip and save almost anything they find online. You can clip entire web pages as they appear, as simplified versions without images and special formatting, and even save web pages as PDF documents. OneNote’s clipper is fine, but it does struggle to preserve line breaks and other formatting rules. Evernote’s Web Clipper also offers “smart” recommendations on where clipped items should be saved based on analysis of their contents. This feature is a little rudimentary and isn’t always accurate, but it’s a nice feature.

Both Evernote and OneNote drop the ball when it comes to security. Evernote users can manually encrypt specific highlighted excerpts of text, but Evernote does not allow users to encrypt notebooks or even individual notes. OneNote doesn’t encrypt anything unless you’re a Business user. Granted, most people probably don’t need 256-bit AES encryption of their notes. But that’s beside the point––especially if you’re paying almost $100 a year for Evernote Premium.

Should I Ever Choose Evernote Over OneNote?

At this point, the only real reason to choose Evernote over OneNote is if you’ve already been using it for some time and don’t want to go to the trouble of exporting your notes to OneNote.

If you’re thinking of using Evernote or OneNote for the first time, we have to recommend OneNote every time.