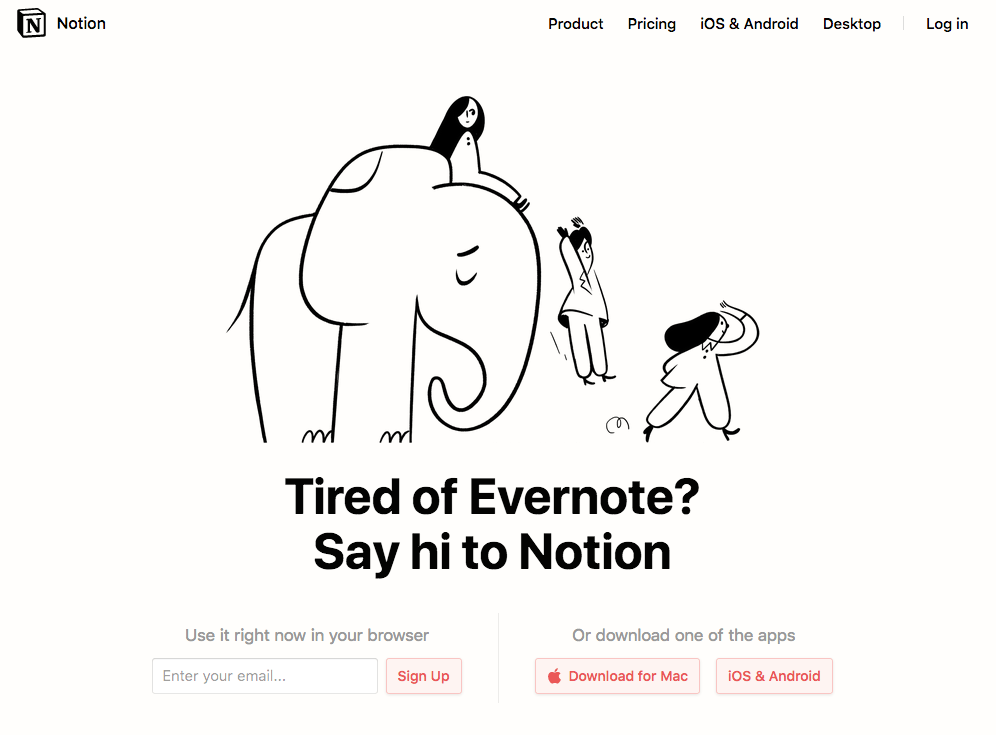 Of the two tools, Evernote is the older product. Evernote has enjoyed its status as one of the most popular note-taking apps for a decade. But after faltering in recent years, Evernote’s dominance has waned, leaving it vulnerable to competition.

Notion is the relative newcomer. Notion 1.0 first launched in 2016. But the product has undergone a significant overhaul since its initial release. Unlike Evernote, Notion aims to be more than just a simple note-taking app. It’s an all-in-one workspace that happens to do a lot of the same things as Evernote.

But which tool is better? Should you pay for Evernote or Notion?

That all depends on how you work.

Below, we’ve examined both tools to see how they compare. We’ve broken our analysis down into several subsections before making our recommendation at the end.

Let’s see how Notion and Evernote stack up.

Notion vs. Evernote: Generalization vs. Specialization

Before deciding whether to purchase a subscription to either Notion or Evernote, you have to ask yourself whether you need a generalized tool that can do lots of different things or a specialized tool with fewer features but greater depth.

Most of us rely on multiple tools and software programs to get our work done. Document tools, email clients, instant messaging platforms, spreadsheets and databases, code repositories, cloud-based storage services – the list goes on. Notion aims to solve the problem of using dozens of tools to get work done by consolidating the most common features of these tools into a single, minimal workspace. Notion doesn’t replace every tool of course, but it can replace lots of them. And many of the tools we rely upon every day can be integrated with Notion to minimize disruption.

Similarly, just as most of us rely on several tools to get stuff done, many of us rely on almost as many ways to help us remember things. Calendar events for invitations and meetings; contact information of important people; hand-written notes for random thoughts; bookmarks for webpages – that’s a lot of stuff to remember. The more tools you use to keep track of your life, the more likely things are to slip through the cracks. Evernote lets you save and organize all your stuff into digital notebooks that can be synched across all your devices.

Although there are a few factors to consider, the choice between Notion and Evernote ultimately boils down to generalization versus specialization. Notion’s note-taking tools are fine, but they can’t hope to compete with those of Evernote because that’s Evernote’s entire value proposition. Likewise, Evernote can’t possibly go up against Notion as a workspace tool because that’s not what Evernote is.

Of course, there’s a little more to it than that. First, let’s see how Notion and Evernote stack up in terms of price.

When it comes to price, Notion beats Evernote hands-down.

Notion’s free plan is a little restrictive, but it’s designed to introduce new users to Notion in a no-risk way. Notion’s Personal plan is ideal for newcomers to Notion. At just $4 per month, it’s also very inexpensive. Even Notion’s Team and Enterprise tiers are reasonably priced.

Evernote’s pricing is a sore spot for many users. Until a few years ago, Evernote had a very generous freemium version. That changed in 2016 when Evernote shook up its executive team and restructured its pricing. Many long-time Evernote users were understandably upset.

Like Notion, Evernote also has a free plan. Like Notion’s free plan, Evernote Basic has a pretty restrictive upload limit. But it gives users a taste of what to expect from its other plans.

Evernote’s biggest weakness when it comes to pricing is the lack of a truly mid-range plan. Sure, $7.99 per month might not seem like a lot of money. But when you consider that Notion does virtually everything Evernote can do at almost half the price, it’s a little more difficult to justify. Similarly, Evernote’s Business plan is cheaper than Notion’s Enterprise plan, but its two-user minimum might feel a little deceptive to some users.

In terms of overall user satisfaction, Notion and Evernote are pretty evenly matched.

Notion has an average user rating of 4.5 stars out of 5 at G2.com, a site dedicated to reviewing software products.

Evernote also has an average user rating of 4.5 stars out of 5 at G2.

It’s worth noting that Notion’s average score was calculated across 40 user reviews (at the time of this writing). Evernote’s score was calculated across 1,381 user reviews. This disparity can be explained in part by the fact that Evernote has been around for fifteen years, whereas Notion has only been around for four years. Despite its smaller sample size, Notion generally has a greater proportion of positive reviews than Evernote does.

Although Notion and Evernote score similarly in terms of average ratings, perceptions of the two products differ quite widely. Between 2011 and 2015, the Evernote brand took a serious hit after the company released a series of largely irrelevant products that strayed pretty far from Evernote’s core value proposition.

Evernote also has somewhat of a deserved reputation for being buggy and unstable. Both of these factors have harmed perceptions of Evernote as a product in recent years.

Notion, on the other hand, doesn’t have the same branding issues as Evernote. It does, however, have something of a reputation for doing lots of things quite well, but not specializing or excelling in any one area.

Overall, we have to name Notion as the winner in this round.

As a dedicated note-taking app that’s been around for fifteen years, it’s hardly surprising that Evernote is the clear winner when it comes to taking notes.

The main reason why Notion fails to beat Evernote as a note-taking app is that Notion’s note-taking feature can be pretty intimidating to use. With so many templates to choose from, making a simple note in Notion can feel like anything but. Notion can also feel pretty sluggish if you have lots of notes stored, particularly on mobile.

Evernote’s note-taking features are far from perfect, however. One of the most common complaints about Evernote’s notes is that it doesn’t categorize or label newly created notes by default. You have to manually rename and categorize each note yourself. If you don’t, it won’t take long before your sidebar is almost entirely populated with Untitled Notes with little to indicate their contents. This might not sound like a huge pain, but can quickly get out of hand if you’re in the habit of taking lots of quick notes on the fly.

Notion and Evernote both offer strong organizational options. Notion offers more flexibility when it comes to organization and lets you create custom workspaces using templates as a starting point.

Evernote’s organizational structure is a bit more defined but still offers users a good deal of freedom to customize how they keep their stuff organized.

Notion doesn’t really have a default organizational schema. How you choose to organize your stuff depends entirely on how you like things organized and the kinds of things you’ll be organizing.

For example, Notion allows you to combine multiple “Block” types – everything in Notion is a Block – on a single “page” or workspace. You could create daily, weekly, and monthly workspaces, each of which might contain different types of Blocks. You could add a personal to-do list to your Daily view, a Trello-style Kanban board to track your week’s work to your Weekly view, and Calendar events in your Monthly view. It’s totally up to you. This flexibility is what makes Notion so powerful.

Evernote’s organizational structure is a little more defined. Individual files, clippings, and other items are stored in Notes, which in turn are organized into Notebooks. Users can then combine multiple Notebooks into Notebook Stacks. It’s a familiar convention that doesn’t take a lot of getting used to.

One pretty big drawback of Evernote’s organizational tools is that newly created Notes aren’t categorized by default. So if you end up using Evernote to create a lot of quick notes, you will soon find your Evernote will be full of Untitled Notes.

Notion’s flexibility is a major asset when it comes to organization. Notion was built with teams in mind. As such, managing and organizing shared assets and collaborative projects is much easier and more intuitive in Notion than Evernote. If you need to keep your team’s assets and projects organized, Notion is the clear choice. If you’re more interested in getting your personal digital life in order, Evernote has a lot to offer.

Overall, both tools offer strong organizational features. It all comes down to which system works best for you and how you prefer to keep your stuff organized.

Both Notion and Evernote rely on the premise of being able to find any saved item quickly. Neither Notion’s workspaces or Evernote’s Notebooks would be much use if you couldn’t find anything within them.

Notion’s search features are also powerful. But they’re not quite as intuitive as Evernote’s search operands. Notion favors a series of keyboard shortcuts that rely on Quick Find, Notion’s real-time indexing of users’ files. This feels similar to OS X’s Spotlight feature. In addition to results based on strings entered by the user, Notion’s search function also returns recently viewed items, which feels quick and responsive.

Evernote’s search isn’t perfect. It can be a little slow, especially if you have lots of Notebooks. That said, it’s the strongest search feature of the two tools, which makes it the winner in this round.

Our Recommendation for Notion vs. Evernote

Now that we’ve taken a look at how Notion and Evernote compare, it’s time to look at everything in context and make our recommendation.

Based on the above criteria, we have to recommend Notion over Evernote.

The fact that Notion can do virtually everything that Evernote can do at a significantly lower price makes Notion the clear choice for most users. It’s more flexible, appeals to a broader range of use cases, and offers users more integrations with the tools they’re already using.

Evernote certainly outperforms Notion in some areas such as note-taking. But generally, Notion offers virtually all the same functionality, plus a bit more besides.

As a relatively newer tool, Notion is far from perfect. But Notion’s developers are listening carefully to the product’s community. The same cannot be said for Evernote. Although both tools have their bugs, many of Evernote’s most persistent technical problems have been around for years.

The one exception to our general recommendation of Notion is if you’re looking primarily for a note-taking tool. If this is the case, Evernote will probably serve you much better than Notion will.