Even if you’ve never used it, you’ve probably heard of Evernote. It’s a note-taking app that can help you organize your digital life, and it’s been around since 2004. You can use Evernote to take notes, organize your files, and take clippings and snippets from virtually anywhere on the web.

But is Evernote any good? What does Evernote do well? Where does it fall short? Should you subscribe to Evernote?

We’ll be answering those questions in this review. We’ll take a look at Evernote’s core functionality and provide a rating for each of its main features before giving it an overall rating.

First, let’s take a look at exactly what Evernote does and how well it does it.

Note-Taking in Evernote: B-

As a note-taking app, it’s not exactly surprising that Evernote’s greatest strength and primary focus is note-taking.

Evernote’s default organizational schema relies on the convention of Notes and Notebooks. Individual files are saved in Notes, which can then be organized into thematic Notebooks. Multiple Notebooks can be combined to create Notebook Stacks. It’s that simple.

But as straightforward as Evernote’s organizational structure may be, actually taking notes in Evernote isn’t as good as it could be. 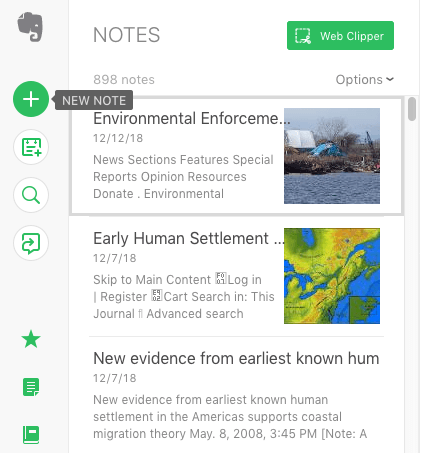 On both desktop and mobile, Evernote’s UI is clean and makes use of familiar icons to indicate the tool’s core functions. Here’s how it looks on desktop:

Clicking the “+” icon creates a new Note. Easy enough, right? Similarly, the button beneath the New Note button creates a New Meeting Note—but Evernote fails to tell or show us the difference between a regular Note and a Meeting Note. Presumably, a Meeting Note is a template for taking minutes during meetings, but we shouldn’t be left to guess what this is.

The same goes for the “Work Chat” button below the Search icon. Hover over it and you’ll see the “Work Chat” label. But click on it, and it expands into a new pane that describes the button as the Sharing button. Which is it? If you’re coming to Evernote expecting Slack-like features, prepare to be disappointed.

Evernote’s UI could certainly do with a refresh. But one of Evernote’s most useful note-taking features is the app’s template gallery. Evernote comes with dozens of note templates split across three main categories: For Work, For School, and For Life. These templates help you take notes quickly. Sample templates include personal planners, calendars, meeting agendas, blog-post worksheets, habit trackers, and more. There are even templates for David Allen’s Getting Things Done productivity methodology, if you’re into that.

As we pointed out in our comparison of Evernote and Notion, Evernote makes it quick and easy to create text-based notes on the fly. However, it lacks a default naming convention for new Notes. If you’re the kind of person who makes dozens of little notes to yourself throughout the day, it won’t take long before your Evernote is full of Untitled Notes. This can quickly become counterproductive and tedious.

One aspect of Evernote’s desktop app that some users may find annoying is that it does not allow you to resize the primary pane. With so many tools allowing users to customize their workspace, the fact that Evernote doesn’t feels weirdly restrictive for little apparent reason. Not the biggest deal, but an annoyance for sure.

Search in Evernote: A-

For starters, Evernote boasts very strong optical character recognition (OCR) technology. (That’s not surprising, once you learn that Evernote founder Stepan Pachikov created Paragraph, an OCR system that Apple acquired and implemented into its Newton handheld computer in the late 1980s.) That means that Evernote can effectively search scanned images of handwriting as quickly as it can search typewritten notes.

Evernote’s OCR is very accurate and can effectively recognize even words written in sloppy cursive handwriting. That is great news for users who like to digitize handwritten notes instead of creating digital ones. Evernote can recognize 28 different typewritten and 11 handwritten languages. It can also scan uploaded images and photos for handwriting to recognize—think pictures of whiteboards or photos of handwritten Post-it Notes, for example.

The other aspects of Evernote’s search capabilities are also very strong. Evernote has a diverse range of advanced modifiers and its own search syntax, which makes finding stuff much easier. Evernote can also search for text strings across a wide range of document formats, including Microsoft Office files and PDFs. Unfortunately, that feature is restricted to Evernote’s Premium and Business plans. You can search by the date a Note was created, or even the location where it was created.

One area where Evernote’s search function—and the tool as a whole—falls short is how well it runs. Even searching for simple strings on desktop can quickly bog down Evernote to the point of having to force-quit the application. This has been a persistent problem with Evernote for a long time, particularly on mobile. For an app that wants to help people remember everything, this is a pretty glaring issue.

Web Clipping in Evernote: A

Evernote’s Web Clipper is arguably one of the tool’s most useful and popular features. Evernote’s Clipper is like bookmarks on steroids.

Web Clipper, which is also available as a stand-alone extension for Chrome, Firefox, and Safari, lets you “clip” elements from a webpage to Evernote. You can clip almost anything: paragraphs of text, images, even entire webpages. 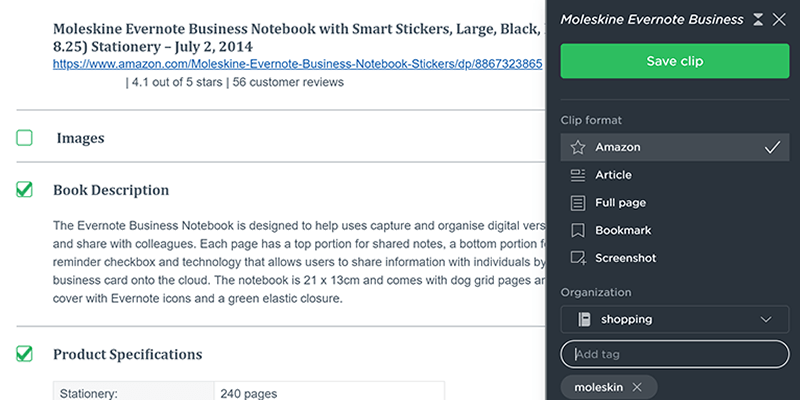 Web Clipper also allows you to specify whether it should preserve webpages exactly as they appear when clipping, or just a “simplified” version of a page. Simplified clipped pages strip away all of the images, special formatting, and even ads from a page. This makes Web Clipper an invaluable tool for serious research projects. Clipped items are categorized and stored just like regular Notes. That means they can also be searched like regular Notes—again, very handy for larger projects.

Clipped items can also be annotated in Evernote. For example, you could clip a webpage of a breaking news story that’s relevant to your business and then add your comments to the story before sharing it with a colleague. You can add highlights to draw attention to specific parts of a clipping.

One of the biggest selling points of Web Clipper is that once an item has been clipped and saved, it will be preserved in Evernote until you decide you no longer want it. Clipped items, links, and pages will all be preserved, even if the live pages or links break.

For years, Evernote has tried to break its way into the workplace. Unfortunately for Evernote, there’s just no reason to bring it to work with you.

Evernote’s attempt to appeal to the work-based productivity crowd essentially involved the creation of a Slack clone called Spaces. It looks like Slack, works like Slack, and feels like Slack—well, almost. Spaces even copied Slack’s UI (but not the fun colors). 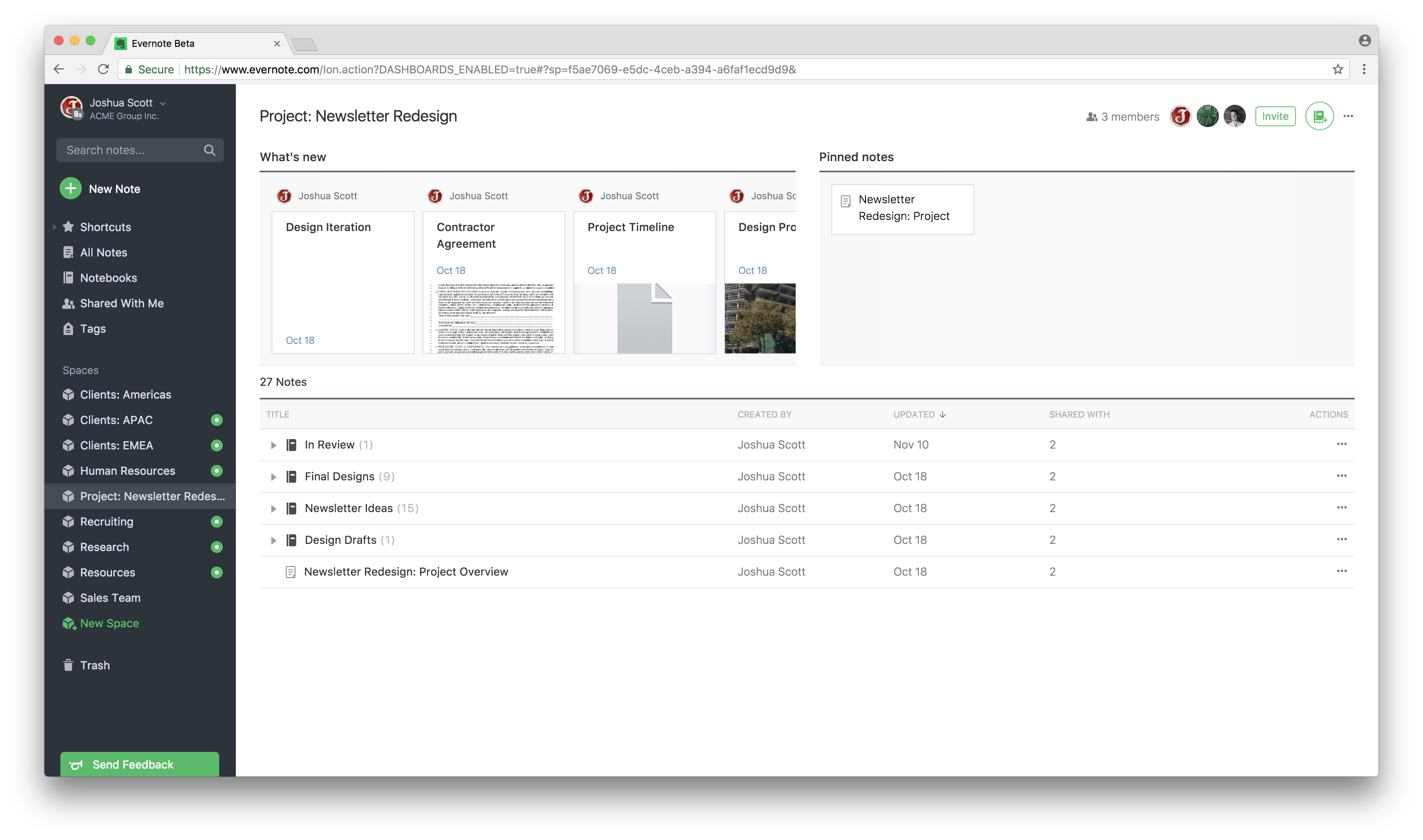 Spaces is a perfectly fine feature; there’s just no reason to use it instead of Slack. Even Spaces’ page on Evernote’s website seems to struggle to find a reason to use it. Evernote says, “Every member of a space has access to everything in the space. So the information you need is easily accessible and always at your fingertips.”

Isn’t that the absolute bare minimum you’d expect from a work-based collaboration product?

These shortcomings aren’t just disappointing—it’s amazing that Evernote would release a collaboration product that doesn’t allow people to actually collaborate on anything.

Evernote has made more than its share of mistakes in recent years, but Spaces is one of the biggest disappointments. Even if Spaces could match Slack in terms of functionality, it would still be a tough sell, unless everyone on your team was using it. With so many critical features missing, it’s hard to see Spaces as anything but an attempted cash-grab.

Integrations in Evernote: A-

One of Evernote’s major selling points is its many integrations with popular software products.

Evernote offers add-ons and plugins to integrate with a wide range of software tools you’re probably using at home and at work. Evernote offers integrations with both Gmail and Outlook, which is a big plus. You can also connect Evernote to Google Drive, Microsoft Teams, Salesforce, and Slack. 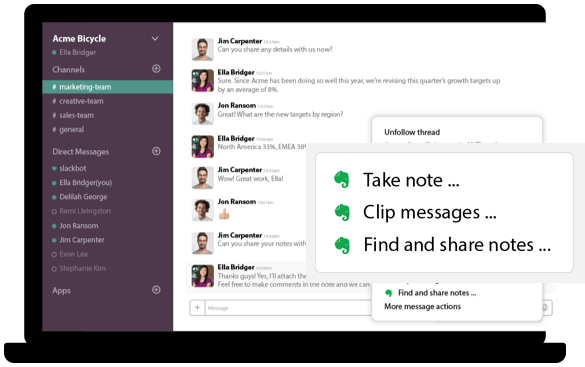 Although Evernote offers plenty of integrations with popular tools, they aren’t available to everyone. The most useful features of some integrations—including the Outlook, Google Drive, Salesforce, and Microsoft Teams integrations—are only available to Business subscribers. That makes sense as an incentive to upgrade, but it’s still frustrating.

Overall, integrations are one of Evernote’s stronger points. It’s just a shame that their more helpful functionality isn’t available to more users.

Put bluntly, Evernote is expensive for what it offers. Yes, Evernote does have a free version. But its limitations can feel pretty punishing at times.

Evernote’s Free plan offers no integrations at all. Users of the Free plan can’t digitize business cards or create contact notes, either. There’s also a 60MB—yes, megabyte—upload limit on clipped items. If you’re planning on using Evernote to help with a major research project, you’ll hit this restriction very quickly. In short, the Free plan is fine if you need a bare-bones note-taking app and little else.

Evernote’s Premium plan costs $7.99 per month. That doesn’t sound like much, but it’s hard to justify spending almost $100 a year on Evernote when competing apps like Notion and OneNote offer so much more for free. Then there’s the issue of Evernote’s many bugs and stability problems. Evernote certainly doesn’t feel like a premium software product.

However, the pricing for Evernote’s Business plan is even harder to justify. Evernote Business costs $14.99 per user, per month, with a minimum of two Business users per subscription. That’s pretty steep for a supposedly collaborative product with very few collaborative features.

On the surface, Evernote’s pricing appears to align with other similar software products on the market. But once you start comparing Evernote’s functionality to other products and look at their pricing, it gets harder and harder to recommend Evernote.

If we had evaluated Evernote 10 years ago, this review would have been very different.

It would have been much easier to recommend Evernote before it underwent its radical pricing restructure. Some might argue that Evernote gave far too much away with its freemium product, which “spoiled” the product’s early adopters. But the emergence of competing tools such as Notion and OneNote makes it even harder to endorse Evernote.

It’s a real shame to see a formerly beloved software product fall from grace the way Evernote has. Evernote isn’t a bad product. It does some things very well, arguably better than any other product on the market. It just doesn’t do enough things well enough to warrant the price.