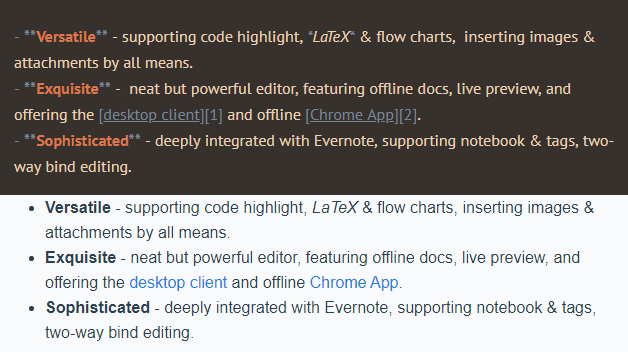 Whether you’re a long-term Evernote user or just looking to switch, the ability to use Markdown could come in handy. Unfortunately, it’s not native to Evernote. And though there are talks of it someday becoming part of the app, that day isn’t today.

However, all is not lost. There are a few ways to add Markdown compatibility to the app. There are also other note-taking apps that do have native Markdown functionality that you might want to try.

What does Markdown do?

Markdown is a simplified method of formatting text on the internet. It doesn’t require going to the formatting bar at the top of a text document; instead, it allows you to use symbols and shortcuts to achieve the same effects. It’s everywhere: most email clients use it, as do social media sites and many chat apps.

Want to link to another website? Type the link text in brackets and butt it up against the actual link in parenthesis, like so: 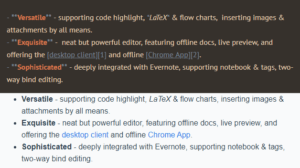 Previously, this job was mostly done with HTML. Not an issue for most web-savvy developers, but more work than most normal folks wanted to do. HTML is more robust and can create more functions and features, but it also doesn’t work in every blog app or chat text box.

Luckily, you can use Markdown in Evernote. Kind of. We’ll get to that in a moment.

How Evernote can benefit from Markdown

The two most useful things about Markdown for Evernote are compatibility and speed.

One of the primary benefits of Markdown is its compatibility. Many text editors don’t use HTML. So when transferring from one app to another, you have to put in or strip out the HTML tags. This is good for Evernote because copying and pasting to and from Evernote is kind of the point: you grab text from something you need, throw it in a Notebook. Grab text from a Note, put it in your blog or essay. Having to convert the text between each platform can get annoying fast.

Text with Markdown is going to translate to other apps without losing formatting. Blogs understand it; word processing apps understand it, as do many email clients. Everything that was bold is going to stay bold. Text with a link won’t break. You won’t have to reformat your headers. It’s useful.

Markdown is faster than HTML. It’s also faster than using the buttons at the top of a graphic text editor. There is an upfront learning curve—this is the case with all shortcuts. But once you know them, or at least the ones you use the most, the speed is unmatched. Why is this important for Evernote? Because taking notes requires speed.

Whether in a lecture or a work meeting, you’re trying to capture notes as fast and succinctly as possible. Having to go back and format your notes is inconvenient. Trying to figure out what you were trying to say while you were frantically typing can be equally annoying. With Markdown, you can add emphasis, create organizing headers, or create bulleted lists without stopping.

Until recently, Evernote wasn’t compatible at all with Markdown. In fact, it still isn’t completely. The company added some Markdown-esque shortcuts to the web app, like “#” for creating headers, but it’s more an emulation of Markdown. Some text formatting pasted in and out of the Evernote editor will get lost. And, if you’re using the other non-browser apps, they won’t work at all.

There are third-party apps that bridge the gap, however.

Marxico is an app that can make up for Evernote’s shortcomings. With it, Evernote becomes fully Markdown compatible. It also adds LaTeX expressions, diagrams, flowcharts, tables, and code blocks. It even allows you to throw tags right into the body, so you can tag while typing. Wrote something about the marketing department? Type [marketing] while you’re working and the tag will get added to the Note. Same with using “@(NotebookX)” to add the Note to a Notebook of choice.

Marxico’s only downside is that it isn’t free. After the free 10-day trial, Marxico will cost you $15.99 a year. Though considering the added functionality, you do get what you pay for.

EverTool is another app for adding Markdown to Evernote. It transforms Markdown syntax into the formatting you want in your Notes. And it allows you to copy and paste the text without losing the formatting. You can make quick highlights right in the editor, import tables from Excel, and create code blocks. 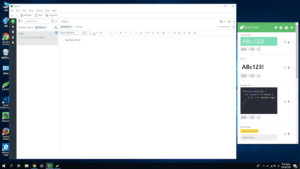 The only downside is that it isn’t linked to Evernote. It’s a side app. Essentially, you cut/copy the text you want to format from Evernote, then click the corresponding format button on EverTool. Then you paste into Evernote, and the new formatting is created.

So, EverTool is great for complicated formatting like tables of contents, but not worth the effort for small things like making text bold or creating headers.

Evernote isn’t the only note-taking app that can parse Markdown. Like we said, Markdown’s ubiquity and compatibility are its greatest assets. There are a few Evernote alternatives that have their own strengths and don’t have trouble with Markdown.

Notable is an easy-to-use note-taking app with a clean design. It also comes with a robust GitHub-style Markdown editor built into the app. It can also handle Mermaid for creating diagrams and do KaTeX for writing math problems. Here’s a look at the editor in use: 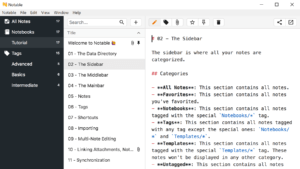 Bear is a note-taking app for iOS and OS X. Bear’s Markdown functionality isn’t available by default, but it can be turned on in the Settings. Bear’s compatibility mode interprets Markdown using CommonMark Syntax. Its editor is more limited, however. Bear’s simplicity can be its curse as well. Images, tables, footnotes, and definition lists won’t work, and custom heading IDs can’t be created.

Notion is an Evernote alternative that’s more complex and more specialized. Notion is, like Evernote, compatible with iOS, Android, Windows, and Mac, and comes with a Web Clipper similar to Evernote’s. And, of course, it uses and understands Markdown. Notion goes a bit beyond some of the other alternatives, too, including embedding video or Google maps. You can also create code blocks with syntax highlighting that are compatible with different programming languages. So if you’re working on code or taking notes about code, they’ll format correctly in Notion.

Speed up your note-taking no matter the app

Thinking about incorporating Markdown into your workflow? Markdown speeds up your note-taking and keeps your formatting across different apps. Whether you choose an Evernote alternative or link to an app like Marxico or EverTool, you can get Markdown compatibility without much fuss.

Learning the syntax isn’t too hard, either—there are plenty of cheatsheets and guides online that can teach you what you can do with Markdown.