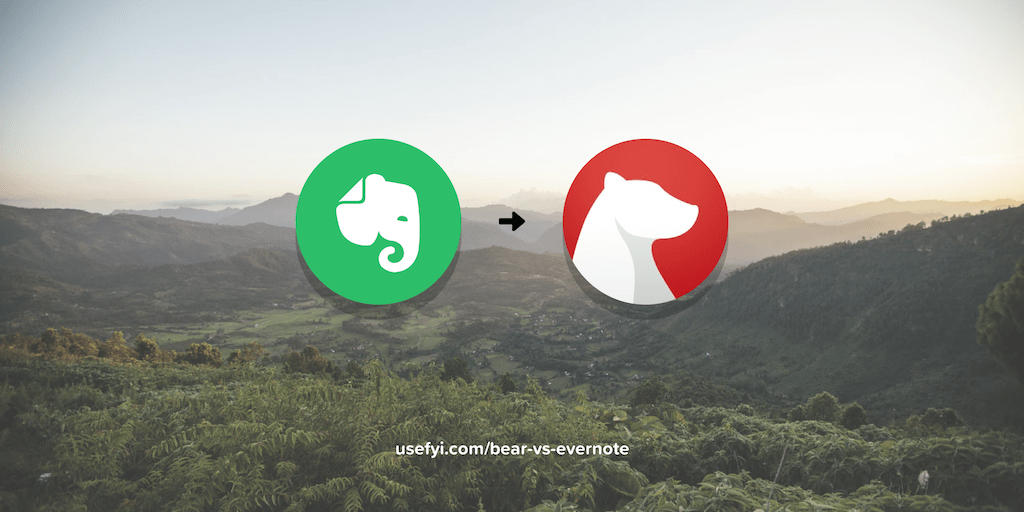 Evernote is one of the oldest and most popular note-taking apps available today. First released in 2004, Evernote was the undisputed king of personal productivity tools for many years. Today, though, Evernote is just one of many tools that can help us organize our lives and get more done.

One such tool is Bear. This simple note-taking app was released in 2016 and has quickly become one of the most popular tools of its kind thanks to its simplicity and clean, intuitive UI. But how does Bear stack up against Evernote?

That’s what we’re going to explore in this post.

We’ll be taking a look at how Bear and Evernote compare to one another. We’ll be looking at several criteria, including note-taking, organization, and UI and navigation, among others.

When it comes to pricing, Bear is the clear winner.

Bear’s monthly plan comes with a one-week free trial of the product. The annual plan offers one month free.

In addition to Evernote’s Free plan, it has two paid subscription tiers:

Evernote has faced a lot of well-deserved criticism over the years regarding its pricing. Evernote used to be one of the most generous freemium products out there. Today, it’s one of the most expensive, and there’s very little to justify the significant increase in cost.

Evernote charges in two months what Bear costs for an entire year. On this basis alone, Bear is the clear winner.

As one of the first note-taking apps, it’s a little embarrassing for Evernote to be outdone in terms of taking notes.

As we covered in our tutorial for Evernote beginners, Evernote doesn’t do a great job when it comes to notes. Actually creating them is easy enough (especially on mobile), but Evernote doesn’t categorize new notes by default, which is frustrating. 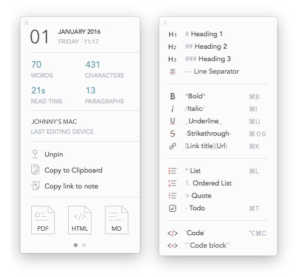 Creating notes in Bear is also very easy. However, this isn’t what makes Bear a better note-taking app than Evernote. It’s the fact that, behind Bear’s sleek, minimal UI, the app supports the popular Markdown syntax. This means you can take advantage of sophisticated formatting options without having to navigate a crowded toolbar or WYSIWYG editor.

One area in which Bear falls down is multimedia capture, such as recording audio or capturing content from images and photos. This might not be the fairest criticism of Bear; the app was designed primarily for text. However, with virtually all note-taking apps offering at least some multimedia capture, this is one of Bear’s few real drawbacks.

Creating notes is one thing. But what about finding them? Once again, Evernote finds itself outdone by Bear.

Not so long ago, Evernote had one of the best search functions of any note-taking app. Evernote was one of the very first apps to support optical character recognition (OCR) technology, which allows users to search images for strings of text. And to be fair to Evernote, its advanced search operands can be very useful, especially for power users.

Unfortunately, like many elements of the core Evernote experience, it feels as though the product’s search feature has been consistently ignored by Evernote’s developers in recent years.

Bear, on the other hand, feels light and nimble when searching. Bear uses a unique hashtag system for searching notes. You can add a hashtag into any note, which then makes that hashtag a keyword that Bear can search for and locate. This system is flexible, intuitive, and, best of all, very fast. Bear’s hashtags can also be nested within each other using slash commands. You can also add as many hashtags to a note as you like. 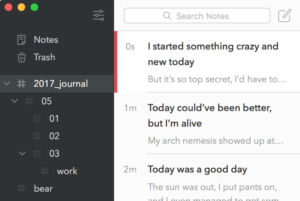 When it comes to organization, there really isn’t much to distinguish Bear from Evernote.

Evernote’s organizational schema relies on the idea of physical notebooks. Individual Notes can be saved in Notebooks, which can be organized into Notebook Stacks. It’s an easy concept to get your head around, and moving Notes from one Notebook to another is quick and simple.

However, Bear just edges out Evernote. Not because it has “better” organizational features but because Evernote doesn’t automatically name or categorize new notes.

When you create a new note in Evernote, that note will be titled Untitled Note by default. It will remain an Untitled Note until you manually rename the file. This might not sound like that big a deal. But if you’re a habitual note-taker, it won’t be long before your Evernote account is full of Untitled Notes with very little to indicate what’s actually in them. This is one of the many things about Evernote that feels like it should have been fixed years ago. 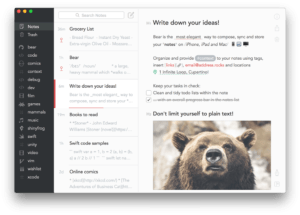 Bear, on the other hand, leaves organization entirely up to you. Its hashtag system means you can create an organizational structure as simple or as complex as you like. Navigating between elements feels a lot like it does in Slack, and the primary UI will be familiar to Slack users.

There really isn’t much to set Bear and Evernote apart when it comes to keeping your stuff organized. That said, Bear still comes out on top.

Although Bear can be customized using Apple’s Workflow automation tool and third-party programs, the app itself does not yet support any official integrations. 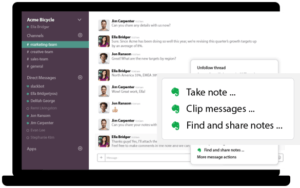 Conversely, one of Evernote’s greatest strengths is its many integrations with popular productivity tools. You can connect your Evernote account to most collaboration and document-editing tools, including Google Drive, Microsoft Teams, Salesforce, and Slack.

Evernote’s integrations might not improve the core experience of using the product, but they do expand its utility. That makes Evernote the winner in this category.

The UI of an app can make or break the entire experience of using that product. When it comes to appearances and navigation, Bear wins once again. 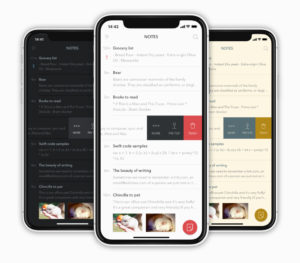 The first thing you might notice when you open Bear is how much its UI resembles that of Slack, especially on desktop. Bear looks even better on mobile. Navigating between individual notes and organizational hashtags is effortless, and the app’s swipe gestures will feel very familiar. Overall, Bear feels and looks sleek, elegant, and sophisticated. 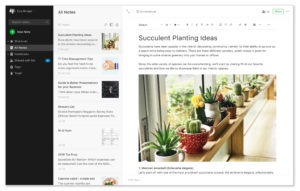 Although Evernote uses a three-column UI on desktop as Bear does, it looks and feels distinctly different from Bear. Evernote looks more like a traditional desktop productivity tool than Bear does. Many of the composition elements that are concealed by Bear’s markup language are plain to see in Evernote. Generally, Evernote feels a little more utilitarian and business-like than Bear does.

Actually, navigating around Evernote isn’t difficult. However, the product’s stability issues can become painfully evident when moving from one Notebook to another, especially if your Evernote account has a lot of Notebooks or large files.

Evernote may be more stable than it used to be, but it’s still enough of an issue to make Bear the winner in this round.

Bear is a great product. But it has two major flaws.

Second, Bear doesn’t have a web app—yet. Shiny Frog is apparently developing a web app, but “it’s still a ways off,” according to the company. That said, the original Bear app took three years to develop, so it’s probably safe to assume we shouldn’t expect the Bear web app anytime soon.

Bear does offer browser extensions for Chrome, Firefox, Opera, and Safari. (Bear automatically installs its Safari extension upon installation of Bear for Mac.) However, you can’t add the Bear extension to your browser unless you also have Bear for Mac installed on your system, which is irritating.

Evernote might struggle to compete with Bear in some areas, but Evernote definitely wins this round.

I used Evernote for years. But there’s no getting around the fact that Evernote costs a lot of money when so many tools do the same things for free or very inexpensively.

Evernote’s biggest problem isn’t the cost or even its instability. It’s the fact that, as a company, Evernote has really lost its way in recent years. The product has lost sight of its original mission to help people “remember everything” in favor of trying to move laterally into the collaborative productivity space.

Ultimately, though, Evernote just doesn’t feel as satisfying to use as Bear does.

Note-taking apps aren’t competing with each other. They’re competing with pen and paper. Products like Evernote can be extremely powerful. But unless making a note is as easy—or easier—than quickly scribbling something down on a Post-it, that product has failed. As Evernote has added more and more features over the years, it’s gotten further and further away from that idea.

Only you can decide whether Bear can serve your needs better than Evernote can. That said, there’s no harm in taking Bear for a spin and seeing what it can do. I’m glad I did—and I’ve never looked back.