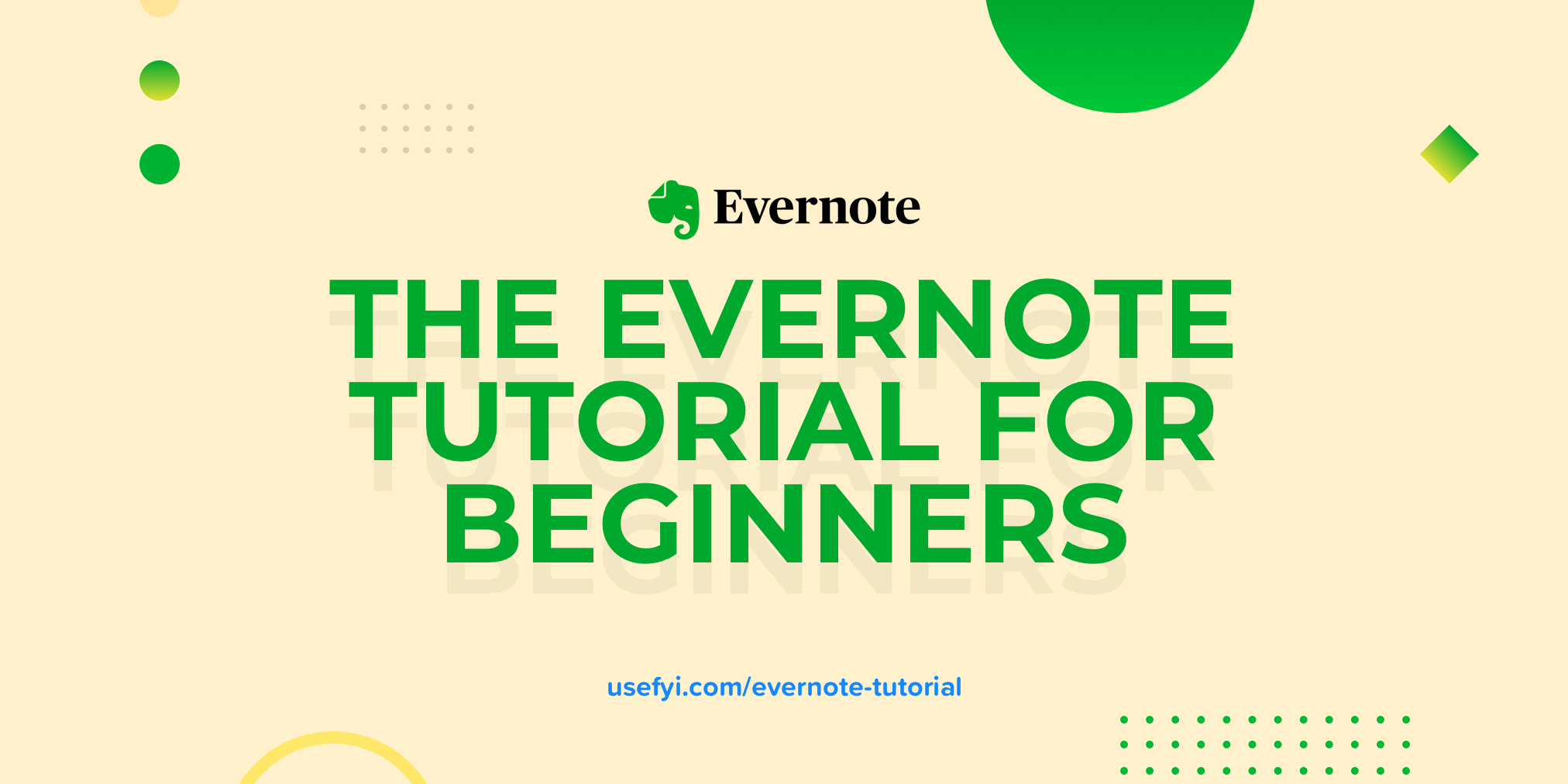 If you’ve been looking for a tool to help manage your digital life, you’ve probably come across Evernote. This note-taking app has been around since 2004. Since then, it has become one of the most popular productivity tools on the market.

Evernote is pretty straightforward to use. But the app doesn’t always do a great job of demonstrating how to use its most useful features. That’s why we’ve put together this Evernote tutorial for beginners. We’ve covered many of the most commonly used features, as well as some hints and tips to get even more out of Evernote.

How to Install Evernote

Installing Evernote on mobile or desktop is simple.

To install Evernote’s desktop client, first visit Evernote’s download page. The download should begin automatically. If it doesn’t, click the link to download the installer. You’ll need to agree to the License Agreement to continue.

If you’re on a Mac, simply drag the Evernote app icon from the disk image to your Applications folder. If you’re using Windows, double-click the Evernote executable and follow the prompts. 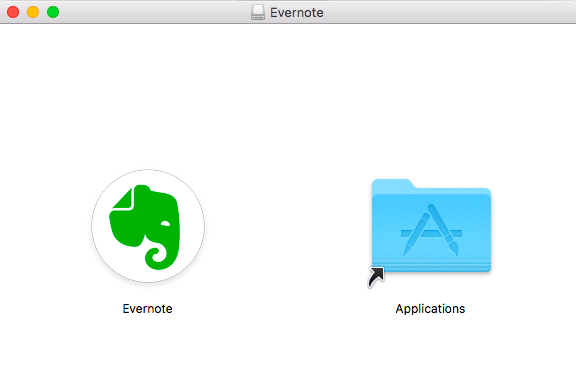 Installing Evernote on mobile is even easier. Simply navigate to the Evernote app in either the Google Play Store or the Apple App Store, depending on the kind of device you’re using. Then, allow your device to install the app. If you’re a Windows Phone user, grab Evernote from the Microsoft Store.

Once you’ve installed the app, you’ll need an Evernote account before you can start using it. This is necessary because Evernote can sync across multiple devices and operating systems. Saved items are synced to your Evernote account, not your device.

Once you’ve installed Evernote and created your account, you’re ready to go. You can also log into the Evernote web app in your browser now, too.

How to Install the Evernote Web Clipper

While you’re getting set up, it’s worth installing the Evernote Web Clipper. This handy browser extension allows you to “clip” almost any item you find online: blog posts, videos, social media posts, even entire web pages, and sync them with your primary Evernote account.

If you’re a Google Chrome user, navigate to the Evernote Web Clipper page in the Chrome Web Store. Then, simply click “Add to Chrome” to install the extension:

The process is very similar for Mozilla Firefox. First, head to the Evernote Web Clipper page in the Firefox Add-Ons library. Then click “Add to Firefox” to install the extension: 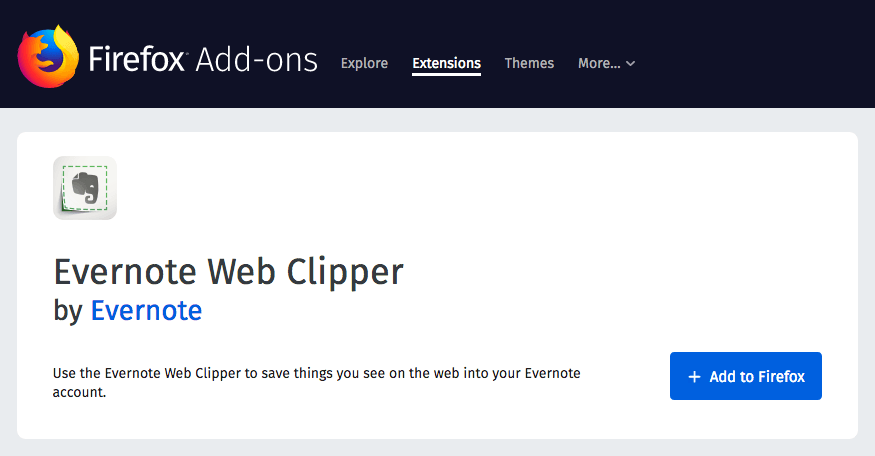 Fortunately, using the Evernote Web Clipper is almost as easy as installing it.

Before the Web Clipper can save anything, you need to tell it what it should clip. The Web Clipper defaults to the “Article” setting. As you can see in the screenshot below, you can select other clipping options, depending on how much of the source material you want to save.

For example, the “Simplified articles” option clips all the text on a page but doesn’t preserve the page’s formatting or typefaces. The “Full page” option clips the entire page, including images and ads. You can also save pages as bookmarks or take a screenshot.

You can also create new Notebooks directly from within the Web Clipper. This handy feature means you don’t have to log into the web app or launch the Evernote app to create a new Notebook, then go back to the Clipper to save the item—you can do it all at the same time. It’s also possible to add tags and comments to clipped items as you clip them, which helps keep things organized.

Now that you’ve installed Evernote and the Web Clipper, let’s dive in and see what Evernote can do.

Creating Your First Note in Evernote

As a note-taking app, Evernote’s primary function is to help you take notes quickly. To do this, Evernote relies on an organizational system based on real-world, pen-and-paper notebooks. Notes are stored inside Notebooks, and Notebooks can be organized into Notebook Stacks. 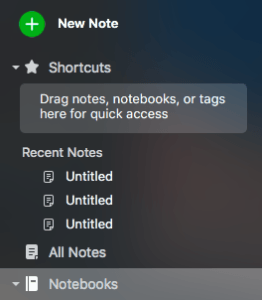 One of the biggest drawbacks with Evernote’s note-taking functionality is that Evernote doesn’t categorize or name new Notes automatically. As you can see in the screenshot above, I created three new Notes using Evernote’s keyboard shortcuts—but Evernote doesn’t know what to do with them. It just leaves them as Untitled Notes and doesn’t categorize them at all. This can get out of hand quickly, so bear this in mind if you’re a prolific note-taker. 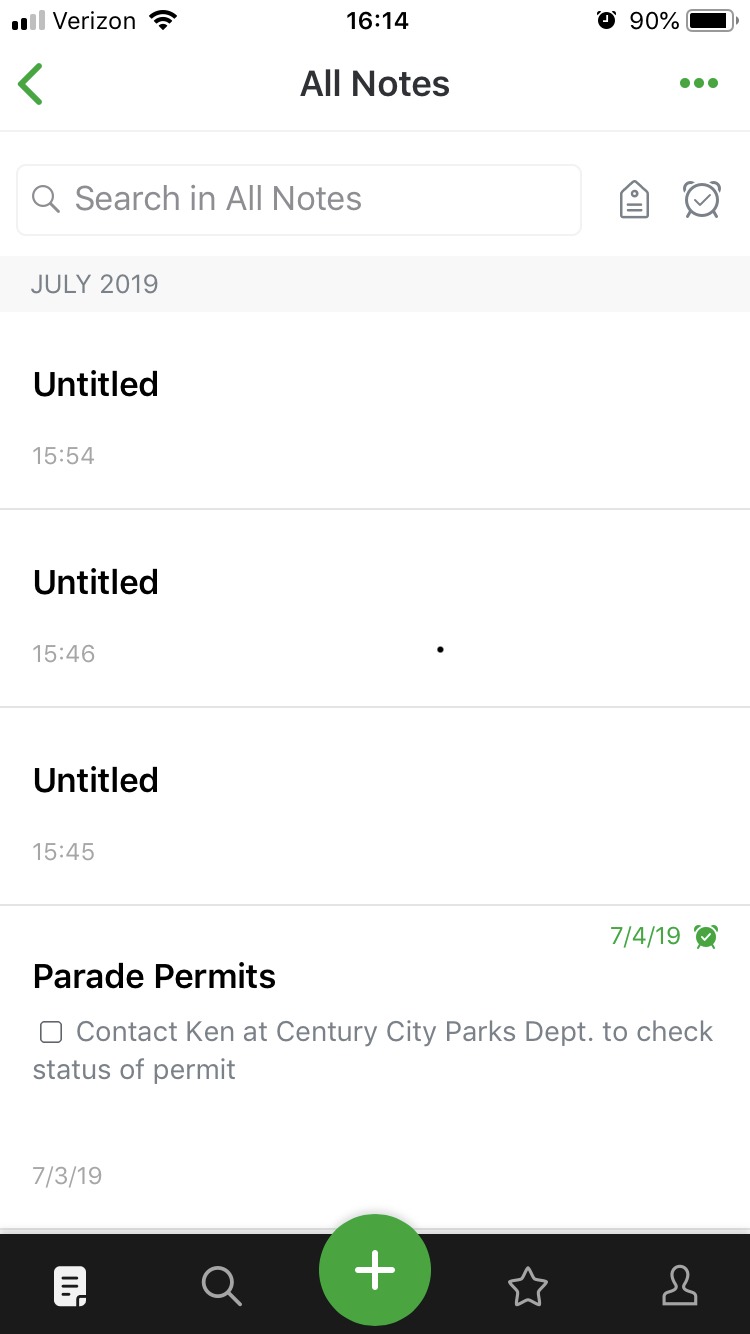 Once you click the green “+” icon to create a new Note, you’ll be presented with a familiar composition interface. You can choose from one of Evernote’s Templates or simply start typing. Note that if you want to use Evernote’s Templates on desktop, your system will open the Template Gallery in a separate browser window. 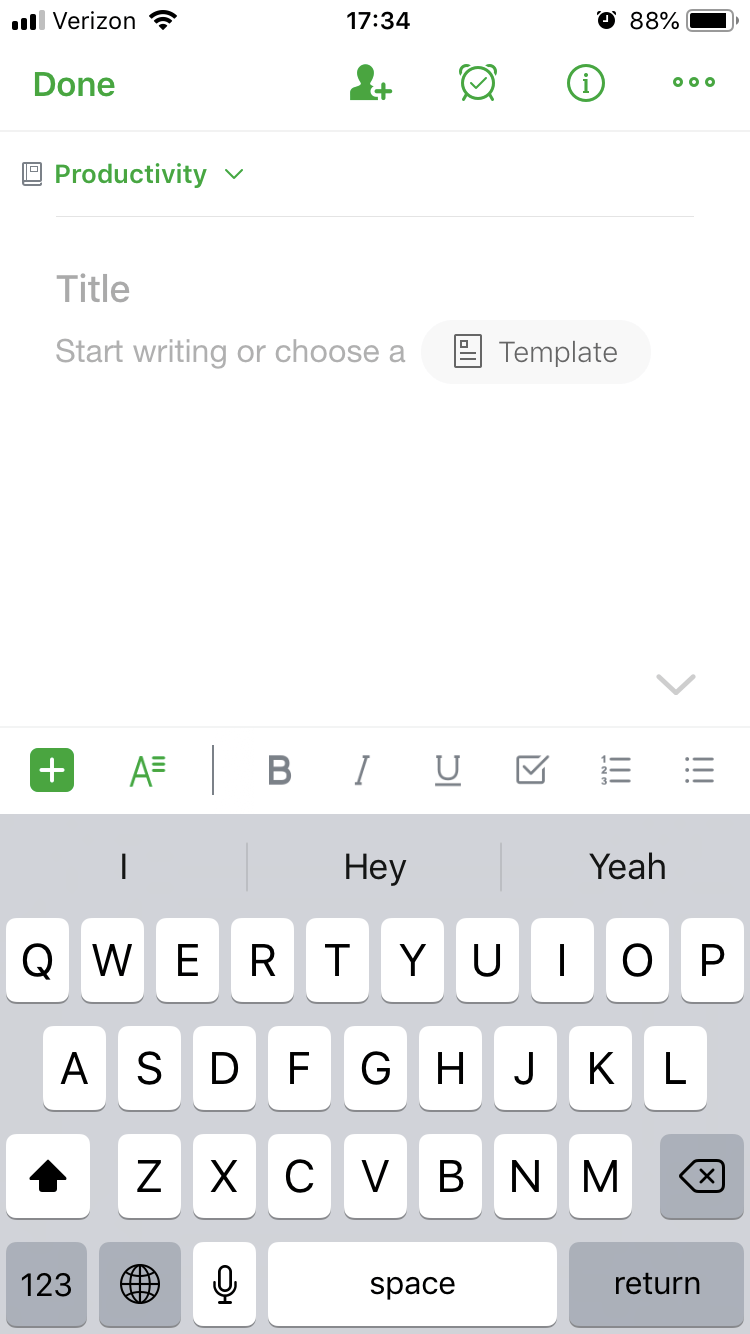 If you minimize the virtual keyboard, you’ll notice a series of icons running along the bottom of the app’s UI. These are Evernote’s advanced note-taking tools.

The camera icon does exactly what you’d expect it to do. Tapping this icon gives Evernote access to your mobile device’s camera, allowing you to take pictures and save them as Notes. Need to preserve a schematic diagram your colleague sketched out on a whiteboard? Create a new Note, take a picture, then save it.

Similarly, the microphone icon to the right of the camera icon allows Evernote to access your device’s microphone. Doing so means that you can save audio files as Notes. This can be a great time-saver for instances when you’ve got a great idea but don’t have time to write it down.

Next up is the handwriting icon. This function allows you to create handwritten notes directly within Evernote, annotate images, and more. Simply choose your input mode, select a brush size and color, then start writing. There can be a little variance in line weight, depending on the angle of your stroke, but it’s generally pretty accurate. 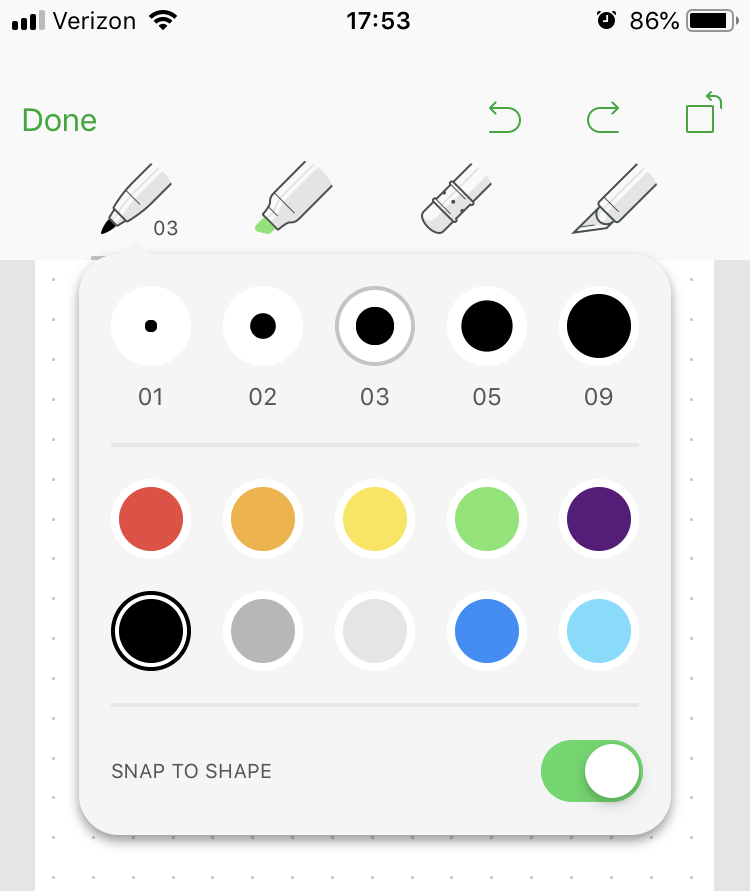 Finally, the paper-clip icon allows you to attach files to Notes and Notebooks. This is a really handy feature for organizing documents associated with specific Notes in one place. For example, you could create a new Note reminding yourself to check in with a company’s accounting department about the status of an invoice. You could then attach a copy of your company’s most recent invoice so you have everything you need when you’re ready to follow up on that task later.

Organizing Notes and Notebooks in Evernote

Now that you’ve created your first few notes in Evernote, it’s time to start organizing them.

On desktop, you can drag and drop notes directly into a Notebook by clicking and dragging on the note you want to move. This approach feels a little clunky, but it gets the job done. If the Notebook or Stack you’re moving a Note into is collapsed, it will expand after hovering over it for a second or so. To expand or collapse Notebooks and Notebook Stacks manually, simply click the caret to the left of the Notebook or Stack you want to expand or collapse.

For whatever reason, Evernote doesn’t always adhere to conventions from other software programs. For example, you can share Notes and manage Note permissions from the right-click contextual menu, but not rename them. This can be frustrating, but it’s not the end of the world.

Organizing Notes and Notebooks in Evernote can be very flexible. It all depends on how intricate your personal organizational system is.

On desktop, you can rearrange and sort Notebooks by a wide range of criteria. You can sort by Date Updated, Date Created, Title, Size, and Source URL. Each of these options has various sub-options. If you choose to sort Notebooks by Title, for example, you can then tell Evernote whether it should arrange the Notebooks in alphabetical or reverse alphabetical order. This flexibility can be really helpful if you have lots of Notebooks.

To change how your Notebooks are displayed, click the View button to the right of the organizational options. This brings up a contextual menu, from which you can choose several different views:

Finally, the ellipsis icon gives you the option to rename, move, or delete Notebooks.

How to Search in Evernote

Once you’ve been using Evernote for a while, it probably won’t be long before you need to find something you saved weeks or even months ago. Fortunately, Evernote’s search functionality is very powerful.

On desktop, you can start searching for something by typing in the search field in the upper-right. You can search all of your Notes or within specific Notebooks. You can also add a number of search modifiers, such as Tag, Date Created, and Date Modified. 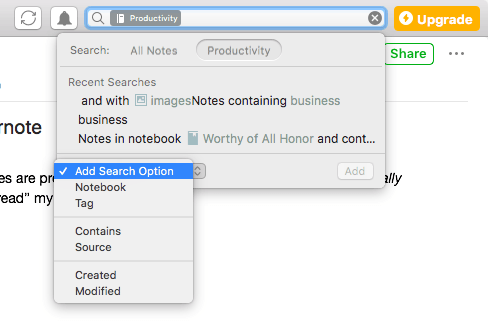 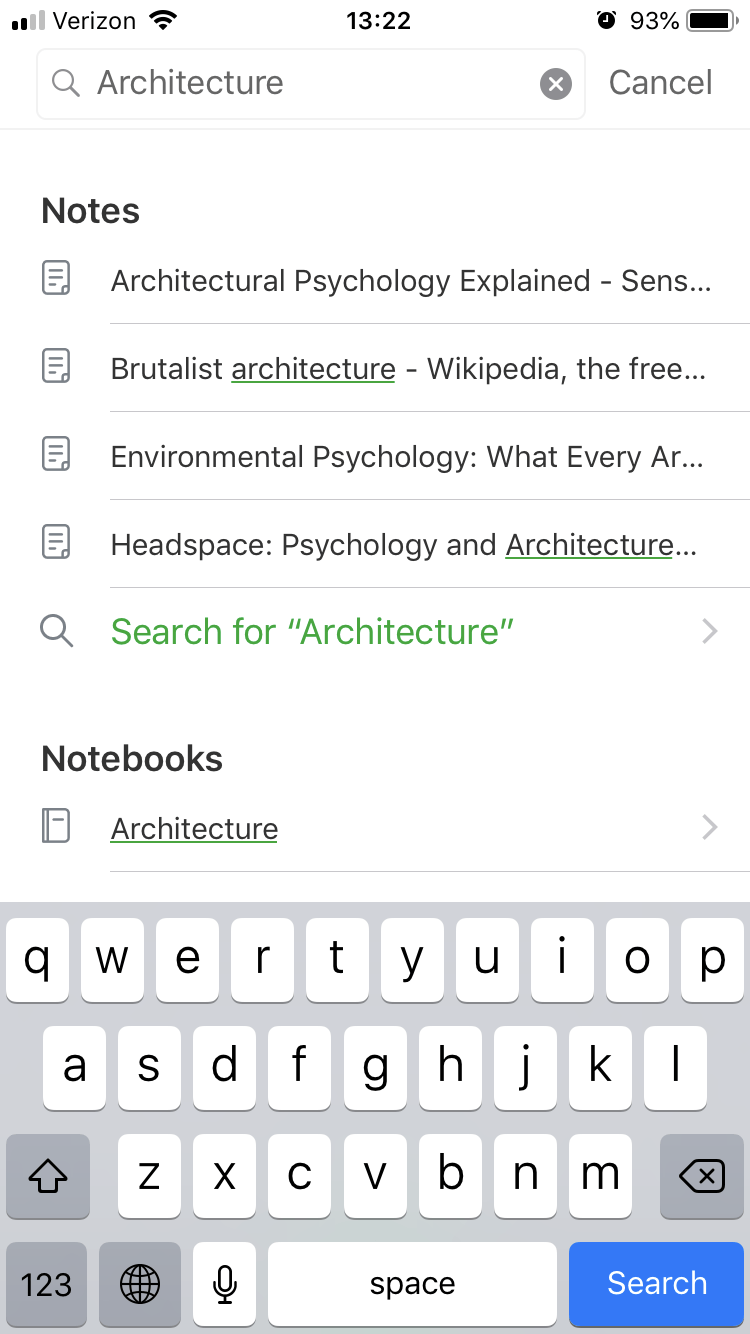 If you’re using Evernote’s desktop app on a Mac, you can also take advantage of Evernote’s descriptive search feature. This allows you to describe what you’re looking for to Evernote, rather than use specific keywords. For example, you could enter “notes from Sweden” to search for all Notes created during your trip to Sweden. Similarly, you could search for “Notes with PDFs” to surface all saved Notes with PDF attachments.

Evernote is a remarkably powerful tool that can handle a surprising range of tasks. It’s far from perfect, but it’s a great introduction to note-taking apps. As one of the oldest note-taking tools on the market, Evernote is also fully integrated with many other popular productivity tools, such as Google Drive, Gmail, Outlook, Salesforce, and Slack. This makes Evernote even easier to use as part of your existing workflow.

Hopefully, this tutorial has given you an idea of what’s possible with Evernote. Whether you’re looking for a tool to help organize a major research project or a digital alternative to pen-and-paper notebooks, Evernote is a solid organizational tool with some cool features. It’s far from the only tool of its kind, but it’s a solid starting point for newcomers to digital note-taking.