Their differences come down to two key things licensing and security. 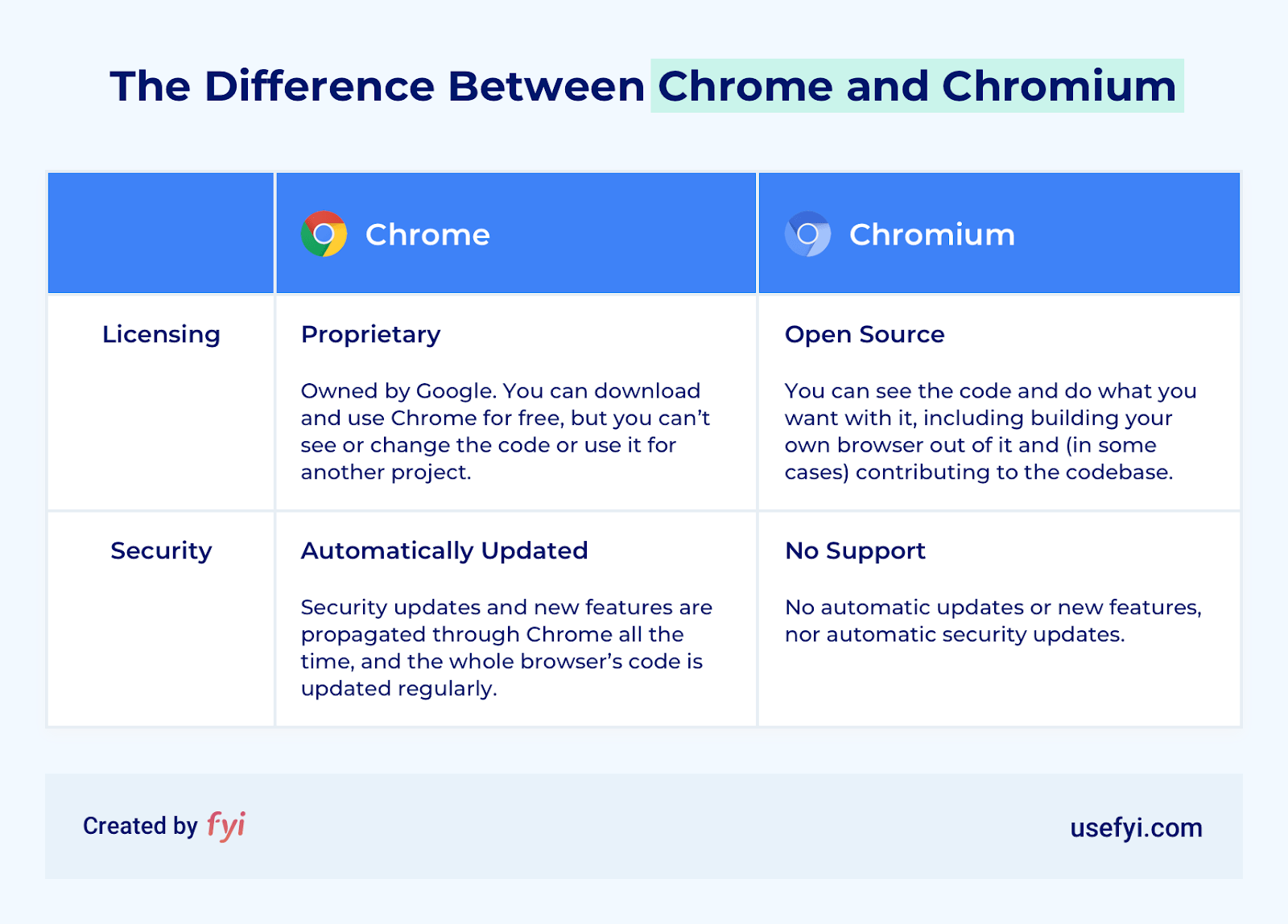 Let’s look at each more closely.

Chrome is Google’s browser, a simple and intuitive consumer browser that can be downloaded for free and used instantly.

Once you’ve been using Chrome for a while, you’ll discover features like Incognito mode, Chrome Extensions, the ability to change your homepage, and tons more.

Chrome began life as a browser during the transition to Web 2.0. Built to adhere to open web standards on the WebKit browser engine and on elements of Mozilla’s Firefox, Chrome rapidly gained market share and currently accounts for 63% of all browsers and 66% on desktop computers.

What does Chrome have that Chromium doesn’t?

Chrome is a consumer browser built to be easy to use. It comes with features that make it easier to do basic browsing and downloading. In particular, Chrome makes it easier to stream video and audio because it comes with support for those services built-in.

Chrome has the following features that Chromium doesn’t have:

Are there other versions of Chrome?

Chromium is a minimalist, free, and open-source browser and OS whose user interface was substantially designed by Google. It’s also the ongoing open-source development project for that codebase. Browsers built on the Chromium codebase include Brave, Microsoft Edge, Opera, and others, as well as Google’s own Chrome browser.

You can download and try the Chromium browser here. The process of downloading and installing it is similar to downloading Chrome, and the application itself is also very reminiscent of a stripped-down Chrome.

While Chromium is available as a standalone browser, it’s mainly used as a test bed and codebase for other browsers. So if you want to see what the Chromium codebase is capable of outside Chrome, check out Opera or Brave.

What does Chromium have that Chrome doesn’t?

Chromium mostly lacks consumer features compared to Chrome. In particular, if you want to stream audio or video, Chromium will require installing the codecs you’ll need manually. On paper, that seems to offer less code bloat, but in practice most users won’t notice a difference in speed.

Here’s what it does offer:

Who should use Chrome?

If you want a simple browser that doesn’t require you to give any thought to privacy or security, use Chrome.

While there are criticisms of Chrome with privacy and security, it’s still the best choice for most people.

If you’re looking for a browser for your business or educational institution, the fact that Chrome can be managed remotely is a major selling point over Chromium. You can set up requirements like forcing users to sign into Chrome, enforcing traceability and accountability across the organization.

And if you’re a developer looking for a browser that’s representative of the average user, but still gives great dev support, Chrome is also a good choice.

Who should use Chromium?

If you want a browser that’s private by default, Chromium is a better bet than Chrome. Chrome collects browsing data, while Chromium doesn’t. And if you’re looking for a browser you can reconfigure and customize to your heart’s content, Chromium is also a better choice.

Yes, the more open range of extensions available to Chromium users is a double-edged sword. More choice, more risk. The less-stable, buggier nature of Chromium is the same deal. But if you’re happy with that deal, Chromium is a good choice for you.

Chromium versions are numbered in four parts: MAJOR.MINOR.BUILD.PATCH. The relationship between Chromium and Chrome is that some version of Chromium goes on to become the new version of Chrome. Chromium 71 was released on September 1, 2018, for example, and became Chrome 71 in December 2018.

Changes to the Major and Minor build numbers track to Chrome Stable channel releases, and they tell you more about scheduling than code content; Build and Patch numbers record changes to the actual code.

Major and Minor are typically updated when a new Beta or Stable build is released. Major builds are updated when a backwards-incompatible user data change is implemented to ensure the data survives updates.

Build is always updated when a new build is put together from the current trunk, the main line of development for the Chromium project. This means it’s updated at least weekly in the case of Dev channel release candidates.