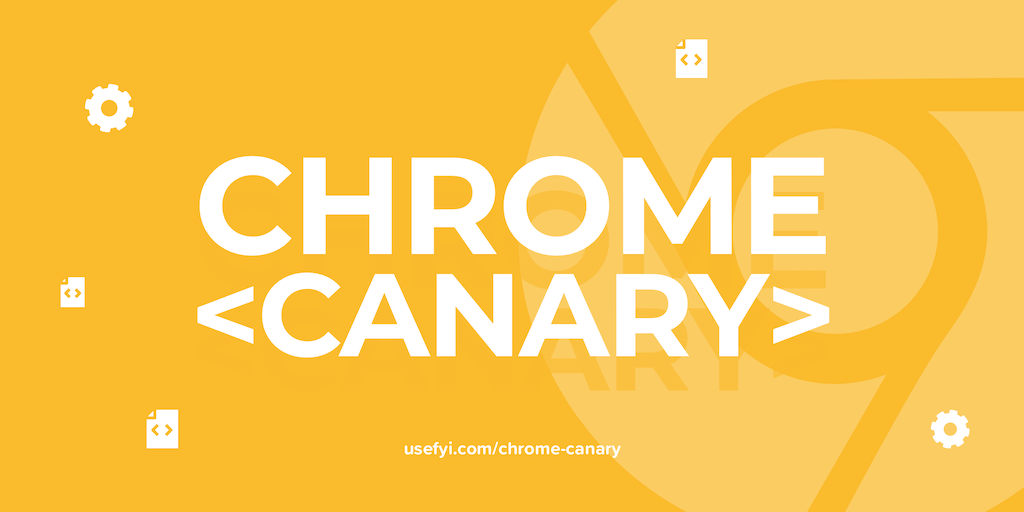 There are a ton of features in Chrome you likely don’t know about, all the newest stuff is in the Chrome channel Canary.

What is Chrome Canary?

Named for the proverbial “canary in a coal mine,” the term canary has been adopted by the software development community for bleeding-edge versions run side-by-side with production releases to accelerate iteration and bug-tracking. It’s Google’s name for Chrome’s experimental model.

You’ll find the familiar Chrome interface. But under the hood are features that may or may not make their way into future Chrome releases. And many that may not work.

You can’t set Chrome Canary as your default browser because it’s inherently unstable. Google used to warn that Canary is “designed for developers and early adopters, and can sometimes break down completely.” But if you’re a developer, you might want to use Canary regularly despite this.

How is Canary different from other versions of Chrome?

Canary is the only Chrome channel that installs separately. And on a Mac, it’s the only one that can be run right alongside Stable. Windows users should find they can run Dev and Beta side by side. Linux users don’t get access to Canary.

Chrome Canary is also a better environment for developers than other Chrome channels because it comes with features, flags, and APIs that are new and untested.

For instance, at the time of writing, any JS written in the console in Dev tools is evaluated immediately. The autofill CSS feature was available first in Canary, months before it was released as part of Stable.

Finally, Canary offers a less-cluttered search experience. It’s not totally ad-free, but it does seem to show a lot fewer ads than Stable, and the interface is a little cleaner.

Who should use Chrome Canary?

Canary is mainly for developers. It’s updated nearly daily with new features, and because it can be run alongside Chrome’s Stable channel for testing and development purposes, developers get access to the latest features while getting the stable, polished Chrome everyone else is using. Developers can test new features, APIs, changes, and flags while enjoying a stable environment for day-to-day work too.

If you’re not a developer, you can use Canary to get a glimpse of where Chrome might be heading, or to get a more modifiable browser experience. Some users like to use Canary because they use Stable for work and work-related applications.

Let’s look at the features, flags, and APIs developers are using.

Developers get early access to new additions to Chrome DevTools in Canary.

For example, right now, Canary users can use Audits and dev tools like Request Blocking and Local Overrides to diagnose website performance. If Audits says that render-blocking resources are slowing down a page, you can use the Request Blocking tab to block those scripts, then re-Audit the page to see if you’ve correctly identified the problem.

There’s also a payment handler debugger in the Background Services section of the Application panel, and a new third-party diagnostic tool in the Audits panel that tells you how much third-party code was requested and how long it blocked the main thread while the page loaded.

Other new things worth mentioning: a bug reporting tool for DevTools itself and additions to the Timing section, including Largest Contentful Paint, which measures time to render the largest content element in the viewport. But new features are added regularly.

The Canary build contains hundreds of experimental “flags” (or features buried in Chrome for developers to tinker with), ever-changing, with new ones added and others removed all the time.

To see these in Chrome Canary, go here: chrome://flags/ 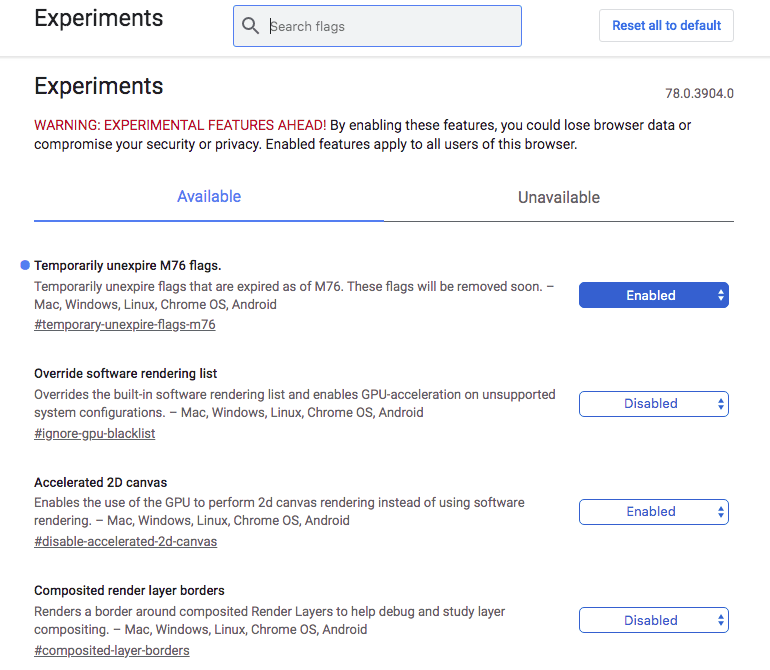 You can search for the flag you’re looking for or just scroll down the list. A few of my favorites:

Many flags are less for improved browsing experience and more for developers.

There’s tons of Chrome Flags in the Stable version of Chrome. You will get access to even more experimental flags in Chrome Canary.

Canary lets you use experimental APIs too. These are turned on using flags and accessed using the permissions field of an app’s manifest. Two things to know about this:

Go to chrome://flags/, find Experimental Extension APIs, and enable it and relaunch Canary.

Canary breaks completely about once a month, and usually takes a day or so to fix. That can be frustrating if you’re relying on it.

Canary can also be buggy. Expect that things won’t work as intended. But you will notice that bugs get fixed faster than the Dev or Beta version of Chrome. Canary gets rebuilt every day so small changes go live faster instead of slowly working their way through an entire release schedule like other versions.

Other common problems with Canary include:

Who should NOT use Chrome Canary?

If you’re not technologically knowledgeable and capable, Canary isn’t for you. There’s little benefit to be had from using a slightly more advanced version of Chrome if you don’t need most of those advanced features anyway. The instability is too high a price to pay.

You should also avoid Canary, and to a lesser extent the other early-release Chrome channels, if you speak English as a second language. These builds will be only partially translated into languages other than English. New features, in particular, will probably be labeled and documented in English only.

How to Get Chrome Canary

There are Chrome Canary builds for Windows 64-bit, 32-bit, Mac OS, and Android, though not for iOS or Linux. Click the relevant link to access it:

All versions of Google Chrome can be downloaded from this page.

And if Canary is broken and you still want access to bleeding-edge new features—or if you are, in Google’s words, “absolutely crazy”—you can download a chewing-gum-and-baling-wire version of Chrome that isn’t even Canary-ready yet here. Updated every few minutes, this build is likely to be extremely buggy and not work well at all.