With Microsoft Office 365, you get the gold standard of classic functionality mixed with modern collaboration features. This is Microsoft’s answer to how people work today—from anywhere, synchronously.

If you’re a fan of Microsoft Word, you’re probably happy with your current desktop version. You know where everything is, and you can create and share documents efficiently enough.

But now is the best time to switch to Office 365 Word. Below, we’ll explain why, and how it compares to the desktop version.

Office 365 is the cloud-based version of the Microsoft Office suite of software. Office 365 includes add-ons and apps that help users with collaboration, making it easier for your entire organization to work together efficiently. And admins can manage the system more effectively than they can when using the traditional desktop versions of Office.

With Office 365, you get the same apps as the desktop version of the Office suite you’re already using… 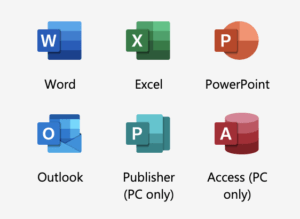 …plus a few extras.

Beyond the ability to work on documents at the same time, Office 365 gives you a variety of collaboration tools for streamlining your workflow. For example:

The short answer: yes. Word is better in Office 365 than it is in the desktop version for the majority of users. Let’s take a look at its key benefits.

When you want to add data and other materials from PowerPoint or Excel into a Word document, passing this information between the various Office 365 apps is far more seamless than it is with the desktop versions of Word and Office.

When you purchase Word as part of the Office 365 suite, you get the benefit of constant upgrades. Tweaks to improve the performance of the Word app or to add a new feature will occur on a regular basis, as will security upgrades.

The one-time purchase desktop version does not have regular upgrades of new features. You’d have to wait until Microsoft releases the new desktop version of Word in a couple of years to get the new features that Office 365 Word users are already using.

With Office 365, you can install Word on any device to use anywhere you want to work. Because Office 365 is web-based, you can run it on Mac, PC, Android, or iOS devices, whether on desktop or mobile.

With the desktop version, you’re stuck working on whichever device you have installed the Word software.

Because Office 365 has a monthly or annual subscription cost, you can plan ahead for the exact cost of using Word and other apps. Rather than a huge lump sum every couple of years for a new version of Word on desktop, you pay a smaller amount regularly over time.

This makes budgeting for your organization a little easier than buying the desktop version outright.

You also can pick the Office 365 plan that best fits your needs and budget, whether that’s the Personal or Business version.

Available as a standalone app

You do have the option of purchasing the Office 365 version of Word separately from the rest of the suite. But in my experience, most people prefer the entire suite, which provides the maximum collaborative capability. This isn’t unique to Office 365, though—you can also buy a standalone desktop version of Word.

Although the two versions have a similar look and feel, they differ in a few ways:

With Office 365 Word, you can share documents among multiple people, allowing them to work simultaneously. They will easily see the others’ changes without having to pass the document back and forth via email, as you might with the desktop version.

Running Office 365 throughout your entire organization? Using Word online means all users are running the exact same versions of the app, as well as your documents. This makes sharing documents among workers even easier. You won’t lose formatting when passing a Word document from a new version to someone running an old desktop version.

As an admin or editor, you can set up exactly who has access to the document and their editing or copying rights. That’s far more secure than the desktop version of Word, where anyone can make copies.

Additionally, if you’re using Office 365 Word on a mobile device, and—perish the thought⁠—someone steals the device, you can wipe it clean of Word data remotely.

As part of your Office 365 subscription, you get free storage in Microsoft’s cloud service OneDrive. You can set up OneDrive to AutoSave backups of all your documents in real-time. Should you suffer catastrophic computer failure, your data is safe in OneDrive.

You can always download a trial version of the entire Office 365 suite, including Word, to see whether the 365 version is the best one for you. And it’s far less hassle than trying to run a trial of the desktop version. The Office 365 trial includes full use of all the apps and services.

It’s a lot like using the desktop version when you stick with the basic features. But the 365 version doesn’t stop there. Here are some tips to help you get the most out of Word’s best features.

What about those who prefer to pay a one-time fee for a software license?

As I mentioned, Microsoft Word is still available through a variety of licensing models, either as a standalone version or as part of the full Office suite.

Although there’s nothing wrong with that old school way of buying software, it’s definitely not the future. The future is being able to access everything in the cloud.

The good news is, the overall cost of Office 365 is almost identical to the desktop version when you add up the monthly commitment. And when you consider the added collaboration, updates, security, and technical support that comes with using Word in Office 365, it’s easy to justify the subscription model as better for your business.