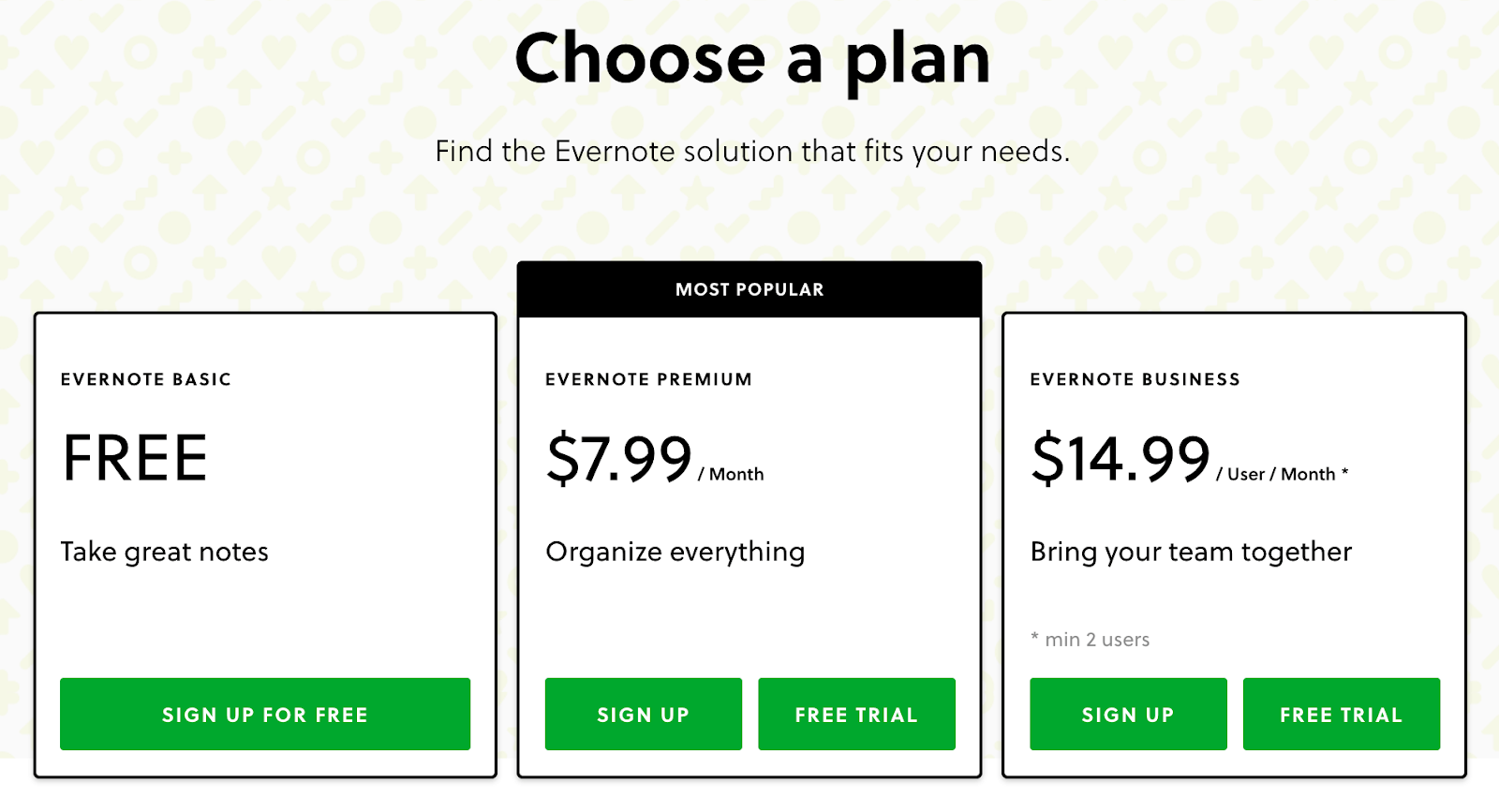 Evernote pricing has gone through a lot of changes over the years.

Years ago, Evernote was one of the primary examples of how a freemium pricing model could build an amazing business. Dropbox and Evernote were the shining successes of freemium.

Then Evernote hit some rough patches.

Unfortunately, their freemium plan has become much more limited than it used to be. And the paid plans had their pricing increased.

Today, we get less for free and have to pay more once we upgrade.

So is it still worth it? Or is it time to use one of the other note-taking apps?

First, the pricing itself is nice and simple:

Either use the basic version for free, upgrade for some extra features at $8/month, or use the Business version at $15/user per month. Nice and simple. 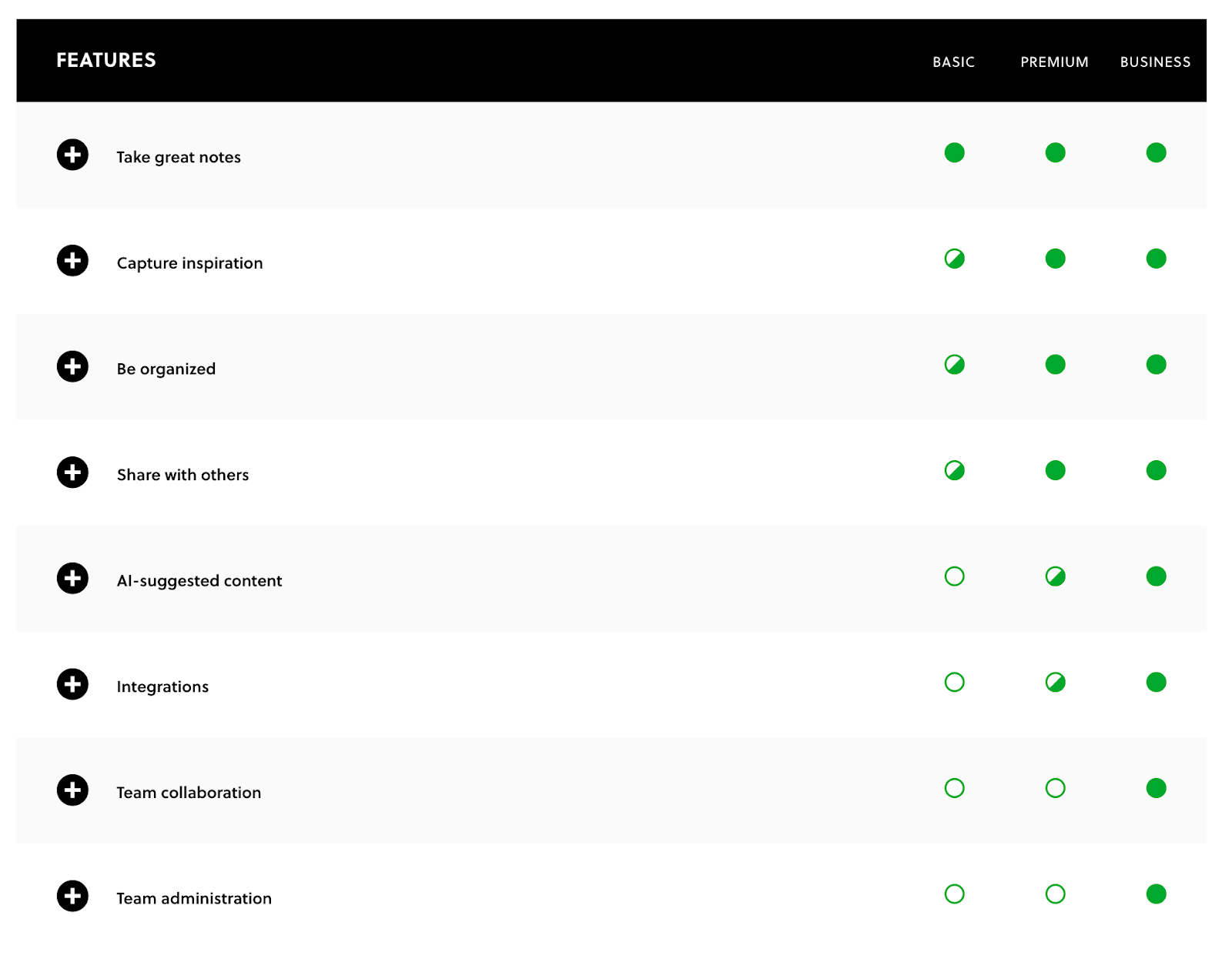 Let’s break each of these categories down to see what’s truly valuable.

Take great notes
This is all the basic note features that you’d expect from a note-taking app. Create and edit notes however you like, clip text and screenshots from websites, and record audio notes. All these features are available across all plans.

Capture inspiration
Every plan can upload documents or clip web pages to Evernote. But freemium can’t forward emails to Evernote, scan business cards, or annotate PDFs. Premium and Business can do all of this.

Be organized
This category includes all the search and organization features in Evernote. The only difference to worry about is that freemium can’t search within PDFs and won’t have version history for notes.

Share with others
Basic sharing and permissions are available on all plans. Premium does unlock an option to turn a note into a presentation. Not sure this is worth upgrading though, great presentations take a lot of work and polish to get right.

And the business plan lets you share notes with anyone at your company.

AI-suggested content
None of the AI features are available for freemium. They include recommendations for related notes, LinkedIn information on contacts, and extra info from sources like The Wall Street Journal and Inc.

In my opinion, these features are hype and you won’t miss much from not having them. Don’t bother upgrading just for these.

Integrations
None of the integrations are available on freemium. With the premium plan, you do get access to Google Drive, email tools, Slack, and Microsoft Teams. The business plan also gets access to CRM integrations.

Team collaboration
These are all the basic features for teams to take notes. Nothing in here would be valuable to someone deciding between the freemium and premium plans.

Team administration
Another set of basic admin features for managing a team. Just like the collaboration features, it covers all the basics without doing anything other team document tools don’t already have.

Outside of the features, there are a few other limits that you’ll want to pay attention to:

A few things are worth calling out here.

First, the device limit on freemium is a real constraint. Evernote used to allow their freemium users more devices but added this limit to try and convince more folks to upgrade to premium. To me, it’s not worth upgrading to premium just for an extra device. The loophole around this is to install Evernote on two devices (like your phone and laptop) and then log into Evernote through the website on any other device that you want to use. You’ll barely notice the difference.

Second, the upload and note limits are easy to hit. If the majority of your notes are text with a few photos, you’ll be fine. But if you upload a lot of photos or PDFs, you’ll hit the limits very quickly. In that case, you’ll need to upgrade.

Third, the freemium plan does lack offline access for mobile. If you regularly take notes in areas without cell reception, you’ll need to upgrade.

How to Pick the Right Evernote Plan

Which plan is right for you? And should you go with Evernote at all?

Is the Evernote Freemium Plan a Good Deal?

Yes, Evernote freemium is still a great, free note-taking plan even after Evernote has increased the restrictions on it.

If you predominately take notes as plain text with occasional photos, you’ll never have to worry about the upload or note size limits. And while the limit on devices is kind of a pain, simply use Evernote’s web-app after you hit the 2 device limit.

Whether or not you decide to use the freemium Evernote plan compared to other note-taking apps will come down to personal preference. Some folks still love Evernote, others rave about OneNote which is bundled with Office 365. Notion has also been getting a lot of buzz recently and has a freemium plan. Find the best app that feels right for you.

Stick with Freemium or Upgrade to Evernote Premium?

It’s no secret that Evernote wants you to upgrade to the Premium plan. Does it make sense to upgrade though? When is it worth the price?

We believe that there are a few situations where it is worth upgrading to Evernote Premium.

Heavy Usage of PDFs or Photos
If you use a lot of PDFs or photos in your note-taking, you’ll want to upgrade to Evernote Premium for a few reasons:

Offline Access for Mobile
If offline access to Evernote on your phone is really important to you, upgrade to Premium. Occasionally I find myself wanting to jot down a few notes without a cell connection or while traveling internationally. For a while, I tried using two note-taking apps to solve this problem. I used Evernote most of the time and then had another one that I used offline. Without a doubt, this was more trouble than it was worth. I ended up getting rid of my second note-taking app and now I just avoid taking notes if I don’t have a connection. If I needed this feature more regularly, I could definitely see myself upgrading.

Version History
In my experience, version history isn’t a major feature for most people. It becomes extremely important for businesses that need to keep records of what was changed and when. For an individual, it’s usually not a big deal. But if you see a ton of value in being able to get a version history of your notes, it’s worth upgrading to Premium.

What about the other features?
Integration, AI-recommend notes, email forwarding, and a few other features are available on Premium. In our view, these features don’t offer enough actual value to be worth the upgrade to Premium. We consider them extra perks.

Should You Use Evernote Business?

No, we don’t believe Evernote Business is a good choice for businesses.

We have two reasons for this.

In other words, buying a note-taking app for a business doesn’t make much sense. You’ll need a tool to manage your documents: Standard Operating Procedures (SOPs), internal reference documents, analysis, drafts of deliverables, spreadsheets, presentations, and everything else. At that point, you might as well pay for Office 365 or G Suite. Paying for a dedicated note-taking app on top of that would be a bit excessive.

Not to mention the fact that note-taking is extremely personal. Some folks love Evernote. Others hate it and prefer OneNote. I’ve even met folks that prefer the Stickies app that’s bundled on every Mac. Since note-taking apps are a very personal choice for people, I’d never try to get an entire business taking notes in the same way. FYI makes it easy to search and organize all your documents regardless of what tool they’re in anyway. I prefer to give people the flexibility to use the note-taking app that they want.