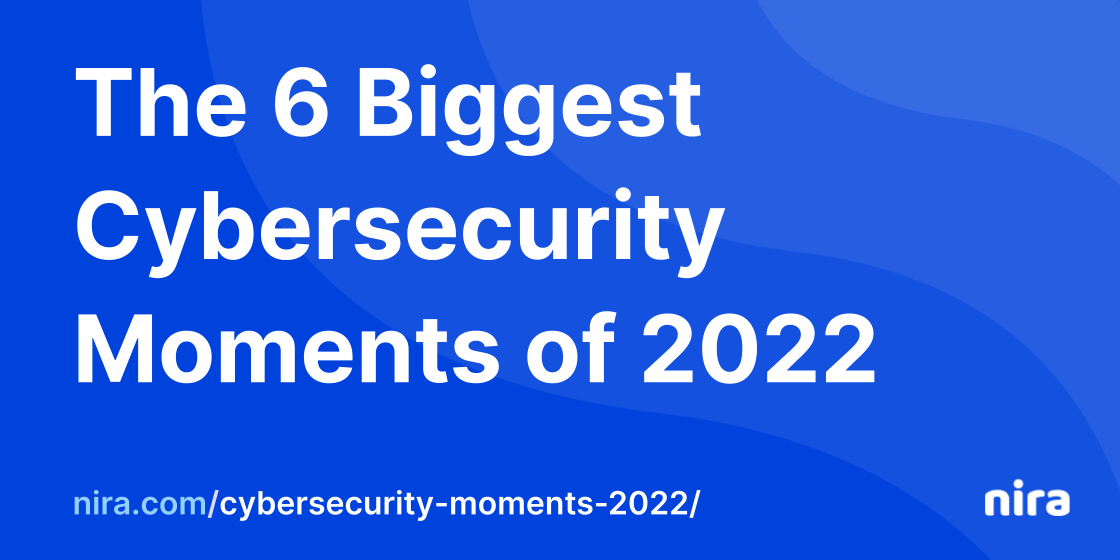 2022 was a significant year for cybersecurity, as the industry dealt with the aftermath of Log4Shell, and companies were hit with massive fines and lawsuits. Healthcare and nation-state attacks were also on the rise, and the term “Zero Trust” became the data security phrase of the year as the U.S. government worked to implement Zero-Trust strategies.

At Nira, we chronicle data breaches and information security incidents weekly to learn from their patterns. We want to understand how to keep customer and company data safe by paying attention to the largest data breaches, the latest strategies, and the best security responses.

Here are the top six biggest cybersecurity moments we identified in 2022:

1. One year after Log4Shell, most organizations are still exposed to potential attacks

Near the end of 2021, the infamous Log4Shell incident occurred. Although the Log4j vulnerability had fewer repercussions in 2022 than initially feared, companies have felt its effects more than a year later.

Several countries were targeted by criminal hacking groups in 2022, including Costa Rica, Albania, Montenegro, and Vanuatu, whose residents were knocked offline for more than a month after a cyberattack on the Pacific-Island nation. Threat actors were allegedly backed by various nation-states in 2022 including Russia, Iran, and North Korea, as governments utilized cyberattacks to aid with political tactics.

The healthcare industry continued to be the industry with the highest average cost of a data breach, according to IBM’s annual report. In 2022, healthcare breach costs hit an all-time high, as the average breach cost increased by almost $1 million to reach a record-breaking $10.1 million.

An initial draft of how this strategy would be implemented was released in September 2021 and then finalized in January 2022. This first draft was open to public comment and received additional feedback from “cybersecurity professionals, non-profit organizations, and private industry that helped inform the final strategy.”

5. The FTC took action against Drizly and its CEO in rare order

On Oct. 24, the Federal Trade Commission announced it was taking action against alcohol delivery company Drizly and its CEO James Cory Rellas for a 2020 data breach that exposed the information of over 2.5 million people.

The order will follow Rellas when he conducts future business and required that he implement a security program at any organization he’s in charge of that handles the data of more than 25,000 people. The order also had implications for Drizly itself, which is now a subsidiary of Uber.

In November 2022, Ireland’s Data Protection Commission (DPC) fined Meta a whopping $276 million after a Facebook data leak in April 2021 exposed the information of more than 533 million users. This was the third fine that the DPC had given Meta in 2022.

They previously fined the company in March after a series of data breaches in 2018 that exposed 30 million Facebook users, and again in September, after an investigation into how Instagram handles teenagers’ data.

As information security professionals embrace new challenges in 2023, it’s useful to reflect on the biggest cybersecurity moments of the past year.

Many of 2022’s issues won’t be going away anytime soon. Government legislation and legal cases will still have effects on IT/Security teams; vulnerabilities will still threaten organizations. Threat actors will continue to target governments and healthcare entities. Major tech corporations will be fined over their handling of customer data.

We pay attention to these past moments to understand how to best protect essential information in the future. Learn more about protecting company and customer data here.