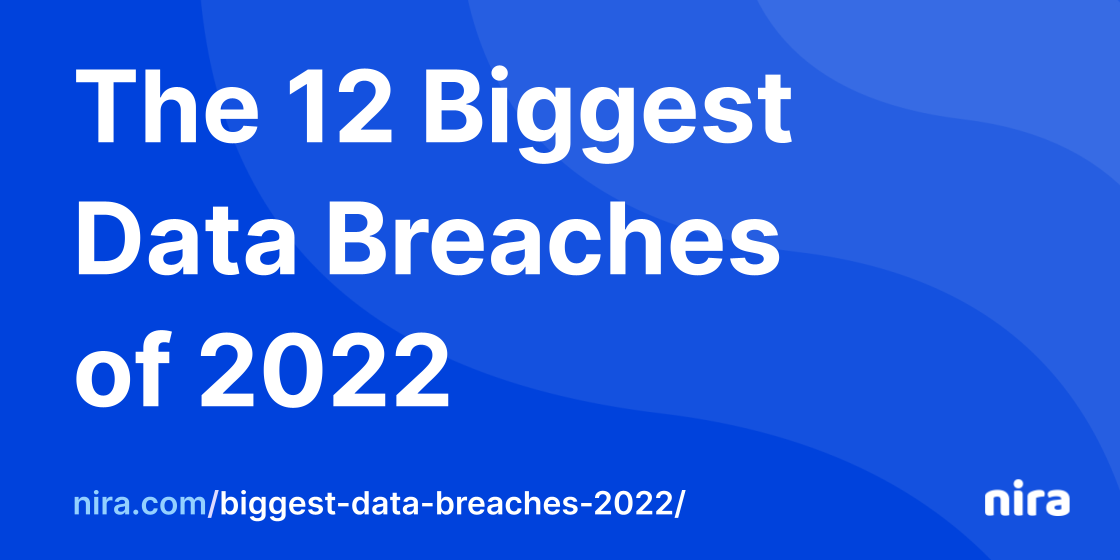 In 2022, a whopping 83% of organizations surveyed by IBM reported experiencing more than one data breach. Having multiple breaches per year is incredibly expensive, especially considering the global average cost of a data breach hit a record-breaking high of $4.35 million in 2022.

Data breaches affected companies across the board, contributing to major cleanups and PR nightmares. At Nira, we document these breaches weekly, to learn from their patterns, and understand how to better protect customer and company data. The breaches we included this year affected some of the largest companies in technology, entertainment, and even cybersecurity itself.

On Jan. 21, 2022, authentication platform Okta was breached by the criminal hacking group Lapsus$. The threat actors were able to infiltrate the company’s systems by gaining remote access to a machine that belonged to an employee of Sitel, a subcontractor that provided customer services for Okta.

Okta dealt with another data breach in December 2022, when the company confirmed that its private GitHub repositories were hacked earlier in the month. The December security incident involved threat actors stealing Okta’s source code, according to Bleeping Computer.

On Sept. 15, 2022, Uber’s cybersecurity incident was first reported. A threat actor, who is allegedly a teenager, was able to compromise the ride-sharing company’s systems and gain access to confidential user data.

The threat actor’s motivations are unconfirmed, however, they posted a message announcing the breach on the company’s Slack, which claimed that the company underpaid their drivers.

3. Uber suffered a new breach after attack on vendor

Uber suffered another data breach in December 2022 after a threat actor leaked employee email addresses, corporate reports, and IT asset information stolen from a third-party vendor.

4. A personal Google account led to Cisco’s May breach

On May 24, Cisco discovered that an employee’s credentials were compromised after an attacker gained control of the employee’s personal Google account.

Credentials for a Cisco account were stored in the browser and synchronized to the employee’s personal account. Through sophisticated voice phishing attacks, the threat actor was able to bypass 2FA and gain access to the employee’s passwords, including their Cisco VPN credentials.

Twitter faced multiple breaches in 2022, including incidents in July, September, and on Nov. 24. An even larger potential data breach of Twitter records was also disclosed by a security researcher.

On Sept. 19, Rockstar Games confirmed on Twitter that a third party had accessed and downloaded some data from their systems⁠—allegedly using Slack—and published it online.

The leak included footage from Grand Theft Auto 6, a project users have been waiting for as early as 2014. The company said although they were “extremely disappointed” that game details were revealed in this way, the project would not be delayed.

On Sept. 24, security researchers alerted Microsoft that some of its customer data was exposed by a misconfigured server that was accessible over the internet.

In a blog, the security researchers at SOCRadar claimed they could link the leaked information to over 65,000 entities from 111 countries stored in files from 2017 to August 2022.

On Oct. 14, Dropbox learned that threat actors breached one of its GitHub accounts, stealing 130 code repositories. According to the company, the code contained “some credentials—primarily, API keys—used by Dropbox developers” as well as several thousand names and emails “belonging to Dropbox employees, current and past customers, sales leads, and vendors.”

In October, cloud communications company Twilio admitted to being breached twice over the summer by the hacking group 0ktapus. The first attack in June involved voice phishing (vishing) while the second breach was caused by SMS phishing (smishing) through text messages.

Password manager company LastPass was breached twice in 2022, with the first incident happening in August. In November 2022, LastPass confirmed that threat actors had accessed its cloud storage using data stolen from its first August breach.

According to the company, some customer data had been exposed. However, “customers’ passwords have not been compromised and remain safely encrypted due to LastPass’s Zero Knowledge architecture.”

On Sept. 25, Fast Company was breached by a threat actor who replaced headlines on the company’s website with obscene, racist language. Two days later, they sent out Apple News notifications from Fast Company with similar messages.

In an unverified post on a hacker forum, the threat actor provided an explanation of how they conducted the breach.

U.S. government contractor Booz Allen Hamilton has disclosed it was breached on April 14, 2022. During the incident, a now-former employee downloaded an internal report that was improperly stored on an internal Microsoft SharePoint site.

The report contained the personal information of possibly tens of thousands of employees, many of whom are contracted with U.S. intelligence and governmental agencies and hold high-security clearances.

It’s been a busy year for security professionals and researchers as data breaches and incidents have affected hundreds of millions of users and cost companies millions in damages.

We’ve found that the majority of data breaches are not due to employees with malicious intentions, but happen because of common mistakes and misconfigurations that could happen to anyone.