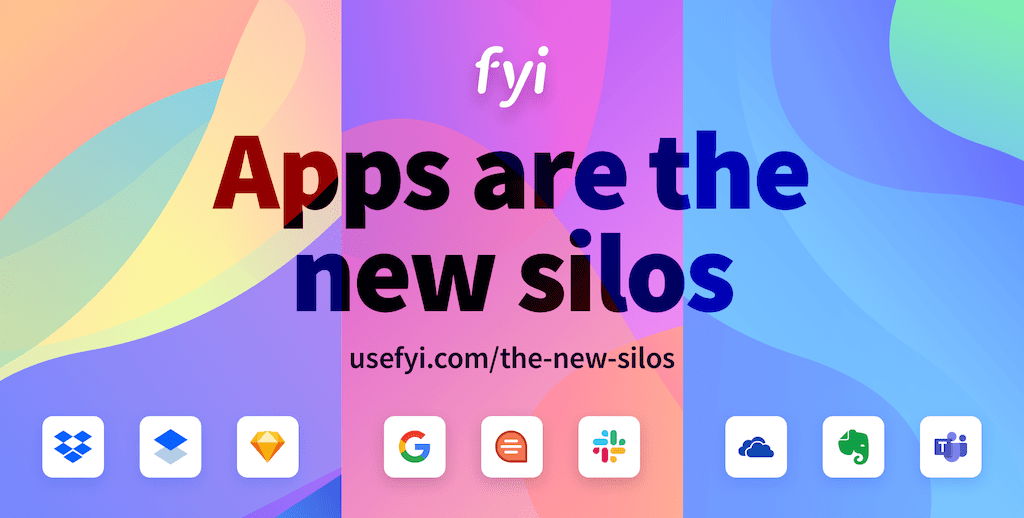 Companies have spent decades trying to tear down departmental silos.

Some have hired consultants to demolish the walls. Others tried radically remodeling their offices in favor of open layouts.

But in spite of all the efforts to break down silos, a new set of invisible silos have emerged.

They were meant to make collaboration easier. But instead, it’s getting harder and harder to get work done. And things just keep getting worse.

Apps are the new silos.

Collaboration apps were meant to empower us, break down silos, and let us work together from anywhere, anytime. Instead, cloud collaboration has created new problems that look like our old ones.

And there’s no end in sight. The spread of apps just won’t slow down. New apps seem to get introduced every week.

There’s a tool for everyone and everything.

Each team in a company uses their own set of preferred productivity tools. And thanks to the rapid rise of specialized collaboration tools, we’re all using more apps than ever.

And that’s not the only problem.

Some departments are app jumpers. They’ll jump from one app to another because they’re never quite satisfied. No app is good enough and they’re constantly on the lookout for something better. Information gets stranded in old apps, since it’s nearly impossible to move documents from one app to another. Now everyone has to switch between apps all the time just to keep up with new information and find old documents too. No one can find anything and everyone’s complaining all the time.

It’s not just departments that create these silos. It even happens with senior hires. You may have just scored a new brilliant VP of Sales. But you’ve also earned yourself a boatload of new collaboration problems too. The Sales VP is obsessed with Dropbox Paper. They just have to use it because they used it at their old company and loved it. They claim they can’t get their work done unless it’s in Paper, and there’s no convincing them otherwise.

Next thing you know they hire a handful of team members from their old company, all of whom are brilliant, and – you guessed it – also die hard Paper users. But everyone else on the team uses Quip.

Silent resentment spreads across the entire department and eventually makes the rounds across the company. The Paper users can’t believe no one else wants to use it, and the people on Quip can’t believe they have to jump into yet another app. And IT is pulling out their hair because they aren’t sure whether or not Paper is going to get deprecated, plus they don’t want yet another document app to manage. But no one will budge, so everyone is unhappy.

And then the new VP gets a new boss. An external hire who doesn’t use Quip or Paper. Instead, they want to see everything in G Suite. Now it’s total chaos and madness and no one knows what to do or who to listen to.

Meanwhile, you can’t get people off of certain apps. No matter how hard you try, it’s nearly impossible to change the way some departments and people work.

Company standards be damned, you’re not going to stop Finance from using Excel. It doesn’t matter that the company uses G Suite, Finance refuses to switch to Google Sheets.

The legal team will never budge from Word documents or redlining and sharing them via email.

Then there are the people who are always on the hunt for new apps to try. They’re the tinkerers. The forward thinkers. The influencers in the company. And they just love sharing their favorite collaboration apps with the team.

It doesn’t matter if everyone in the company is on Slack, they just have to get a group of people together to try out Microsoft Teams. They’re Notion addicts and are gaining steam in their campaign to bring it to the entire company. And they’re doing it under the radar just in case IT won’t approve. Even if you wanted to track down these accounts, you couldn’t.

How did we even get here?

Suddenly, your team is using what feels like 50 collaboration apps at once, and so many of them do the same things.

Finding documents is a nightmare. It takes someone with a photographic memory just to locate a document. Except none of us have photographic memories. Was it in Google Docs? Quip? Dropbox? Notion? Sharepoint? That email with a Word attachment? Did it get shared in Slack? Which channel? Where was that final version again?

Suddenly people are hopping between tools, endlessly switching apps to find what they’re looking for.

Or worse yet, they can’t find the document anywhere and have to ask a coworker where it is. Now multiple people are wasting their time trying to find a document. All because of the explosion of collaboration apps, and the ease of creating new documents.

There isn’t even a single person in the company who knows what apps are being used and where information lives. Information is constantly getting lost forever as people leave the company or forget where things are. Or that they even existed in the first place.

As our tools have fragmented, so have our sources of truth. Instead of office floors and doors building our silos, our apps have forced us into cloud silos that we can’t even see.

Signing up for new productivity tools has never been easier, it’s nearly impossible to stop people from using new apps. Even if companies lock down purchasing, freemium apps still spread across the org.

“Land and expand” might be an excellent sales model. But when every tool is using it, internal communication grinds to a halt.

The glut of tools gets out of control for IT. Security risk escalates, nobody knows who has access to what, and vulnerabilities go unnoticed for years. Getting control of all the tools that a company uses has become a nightmare.

Now that many of us are forced to work remotely, that’s only more gas on the fire.

I wish the problem ended here. It doesn’t.

Let’s say your team does a pulse survey. If it’s like the survey’s I’ve been seeing, complaints about information and resource access will be rampant.

The results of the survey then go to the leadership team and it now becomes their problem. Something has to be done to improve survey results and clean up the document disaster.

There’s now a movement across the executive team to cut down on the number of apps. Rumors of the initiative fly through the company. People start hoarding even more cloud apps for fear that some will go away.

Some people are saying if they can’t use certain apps, they won’t be able to get their work done. Others are saying if the number of apps aren’t cut down, they’ll go crazy because they can’t find anything and they’re spending way too much time switching between apps.

A team is selected to solve the problem of app silos. It’s cross-functional of course, to help break down walls even further.

The team decides to consolidate everything into one app. One app to rule them all. One app that has (or claims to have) all the functionality the others have. The team starts putting everything into that one app. It takes months to get all the work done and a bunch of people working on the consolidation. Copy, paste. Delete. Bang head on keyboard. Repeat.

Suddenly, even though almost everything is now in one place, no one can find it. Bitterness spreads like wildfire through the company. How could they take my favorite app away? Why didn’t they listen to me? Where is that document? Should I get a new job?

The initiative fails after 6 months of hard work, and everyone goes back to using the apps they preferred in the first place. Or at least that’s what the cross-functional team thinks. In reality, everyone was using their collaboration apps of choice in the shadows the entire time. They just went from sanctioned company accounts to new accounts that the executive teams had no idea about.

You can’t even be sure about who is using what apps anymore.

On top of the dozens of sanctioned productivity tools and apps, there are dozens of shadow collaboration apps that IT doesn’t have their hands around.

This is the new normal at work, and there’s no end in sight.

Where do we go from here?

The dream? A single source of truth.

The reality? No single source of truth.

Company information is spread across each and every tool you use.

Consolidation is impossible. And the silos that apps have created are unbreakable.

Unless of course there were a glue, a connective layer between all of the apps your company uses.

A collaboration layer that would give you access to all of your company information in one place. Every time anyone in the company wanted a document, there would be a single place they could go to find it. Any time someone wanted to know what was being worked on, they’d have it in just a few clicks.

See what’s happening across the organization, in real time.

Build your own groups of people to organize information across all your tools in one place. Share documents without any work.

Magically get to the information you need next, in seconds.

And for IT to know all the information is safe and secure across the tools a company uses.

People in the team would find information the second that they needed it. Without asking anyone. Without going through app after app. No embarrassing snafus. No wasted time searching. No anxiety and frustration.

Suddenly teams are working like a well-oiled machine and everyone is a lot happier. People have more time to devote to the things that matter. Work is actually getting done.

FYI does all of this. Today.

And best of all, it’s not yet another app trying to be your single source of truth.

It’s the layer across all your apps to find, share and secure information.

Get started for free or schedule a demo.