Phishing attacks represent a highly effective means for hackers to access your computers. When you fall victim to a phishing attack, you could lose critical personal or company information and financial resources.

What Are Phishing Statistics Anyway?

Many private entities and governmental departments collect data about phishing. These phishing statistics are essential for helping law enforcement understand the methods hackers are currently using to try to steal information. Phishing stats also give cybersecurity companies the information they need to craft the most efficient types of defense.

Security departments at businesses use phishing statistics to figure out the best way to educate employees and network users about ways to protect themselves and the business’ data.

During a phishing attack, a hacker will attempt to fool someone into giving up sensitive information by posing it as a legitimate request. Preventing phishing is a key means of deploying employee data security.

A phishing attack may involve a hacker sending you an email requesting banking information, passwords, or a Social Security number. The attacker may try to entice you to share this information through threats, the promise of a reward, or by simulating a legitimate request from someone you trust.

Phishing attacks can cause a number of problems for individuals and businesses, including tricking people into revealing:

Hackers can then use this information to commit identity theft or steal money from you. At a business, a phishing attack may give the hacker the ability to upload malware or viruses to the company network, giving the hacker illegitimate access to the network.

Now that you understand phishing attacks and why it is important to protect yourself and your business, we uncovered the most interesting and vital phishing statistics during our research.

According to research from Proofpoint, if your business or organization hasn’t recently experienced a phishing attack that worked, you’re in the minority.

In 2020, 57% of businesses and organizations worldwide reported seeing a successful phishing attack that they had to try to overcome. That’s an increase from the 55% that Proofpoint reported in 2019.

The most common type of phishing attack involved sending the same email message to multiple users in the organization, hoping at least one person falls for the scam. 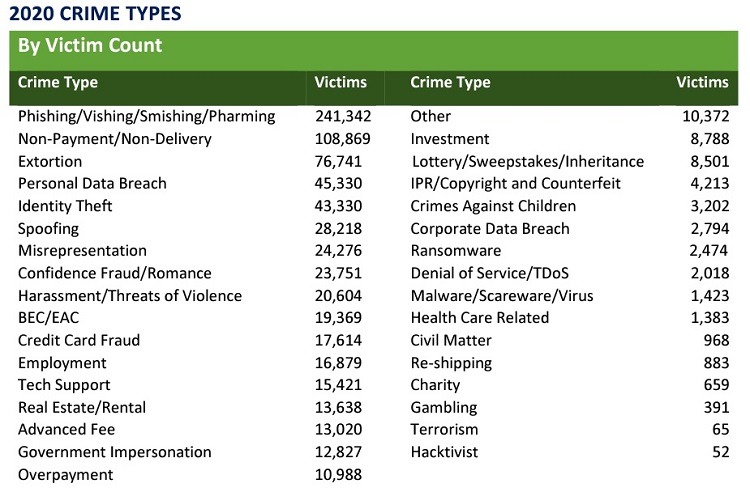 Phishing attacks climbed significantly year over year as well. The FBI reported more than 241,000 complaints regarding phishing in 2020 versus almost 115,000 phishing attack complaints in 2019.

3. Most Common Types of Data Compromised in a Phishing Attack

According to Verizon, certain types of data fall into the wrong hands through phishing attacks more often than with other types of attacks, including:

Proofpoint reports that successful phishing attacks globally result in a loss of data 60% of the time. A compromise of account credentials for the organization’s network occurs in about 52% of phishing attacks that work.

5. Understanding of What Phishing Entails

Security professionals agree that the best defense against phishing attacks in a business or organization involves educating team members and employees about what to expect. According to Proofpoint, employees around the world can accurately describe phishing 63% of the time.

However, employees in the United States tend to have less of an understanding of phishing than counterparts elsewhere in the world. Based on location, employees who successfully described phishing in a survey question included:

6. Prevalence of Training for Cybersecurity and Phishing

Proofpoint reports that businesses use a wide range of educational techniques to try to give employees the training they need to understand and to avoid phishing attacks and other cyberattacks.

When developing training programs for security awareness, 98% of organizations report that they have this type of program in place. However, the level of effectiveness of these programs varies widely.

In cybersecurity training sessions, 74% of companies report spending time on email-based phishing attacks, which is more than any other type of cyberattack. For example, only 44% of companies include training on best practices for password creation, and only 48% discuss the security of mobile devices.

Organizations also deploy significantly different means of deciding which members of the organization should have cybersecurity and phishing training.

Finally, organizations report widely varying frequencies for holding training sessions. While only 2% of companies report that they have no formal training procedures in place, among the companies that perform training, there is no clear majority on how often the training should take place.

Through testing scenarios of the vulnerability of certain networks, Terranova Security and Proofpoint report that team members in businesses and organizations will click on a fake attachment in a phishing email message about 20% of the time. If the email contains a fake link to a website, about 12% of employees will click on it.

Only about 4% of employees will actually enter data in a phishing attack. (This means of the 12% of employees who will click the phishing link in the email to open a fake website, about one-third of them will enter data into that site, which equals 4% of all employees participating in the test.)

Overall, according to Proofpoint’s tests, 11% of employees failed a phishing test in 2020, which is a slight drop from the 12% who failed the test in 2019.

Some of the most successful subject lines and email content that will entice employees to click on the phishing link include:

As mentioned earlier, employees failed the phishing test 11% of the time in 2020. Almost more disappointingly, employees only were able to successfully report 13% of the phishing emails. This means they almost fell for as many phishing schemes during the testing procedure as they spotted and reported phishing attempts.

9. Phishing Attacks Can Be Costly

When phishing is the initial attack vector for the data breach, the average cost to deal with the breach is more costly than attacks that originate with a malicious insider, a software vulnerability, or a compromise in the physical security of a location.

10. Phishing Attempts That Lead to Ransomware Attacks Often Lead to a Payout 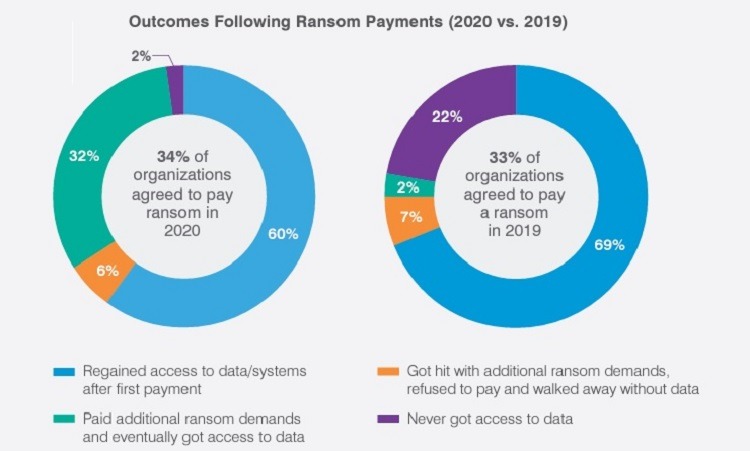 As mentioned earlier, phishing attacks sometimes result in a hacker being able to install ransomware on the network.

11. Phishing Attacks are Difficult to Contain

According to IBM’s data breach report, when phishing represents the initial attack vector, companies report needing an average of 213 days from the date of the attack to the date of discovery.

As an example, if a phishing attack succeeds on Jan. 1, it requires an average of 293 days, or until Oct. 21, to discover and take care of the problem. This is longer than attacks involving a third-party software vulnerability or a compromise of a location’s physical security.

According to IBM, the majority of data breach attacks against a business or organization require between 285 and 305 days to resolve.

12. Phishing Attacks Spiked During the Early Days of the COVID Pandemic

According to Barracuda, in March and April of 2020 when businesses were scrambling to give employees an opportunity to begin working from home in a secure manner, phishing attacks spiked.

Barracuda worked with Columbia University to study the originating location for phishing email attacks. The researchers studied more than 2 billion emails sent during January 2020, of which about 10% served as phishing attacks.

According to Google Safe Browsing, which measures the safety of websites globally, the number of sites marked as phishing sites in January 2021 totaled more than 2.1 million sites. This represents an increase of about 27% from January 2020.

When employees fall for phishing attacks, Proofpoint reports that organizations struggle to determine the appropriate level of punishment or consequences.

Organizations use consequences ranging from counseling and additional education to disciplinary actions and monetary penalties. Some companies use termination as a consequence, although only 20% of companies report using this extremely severe punishment.