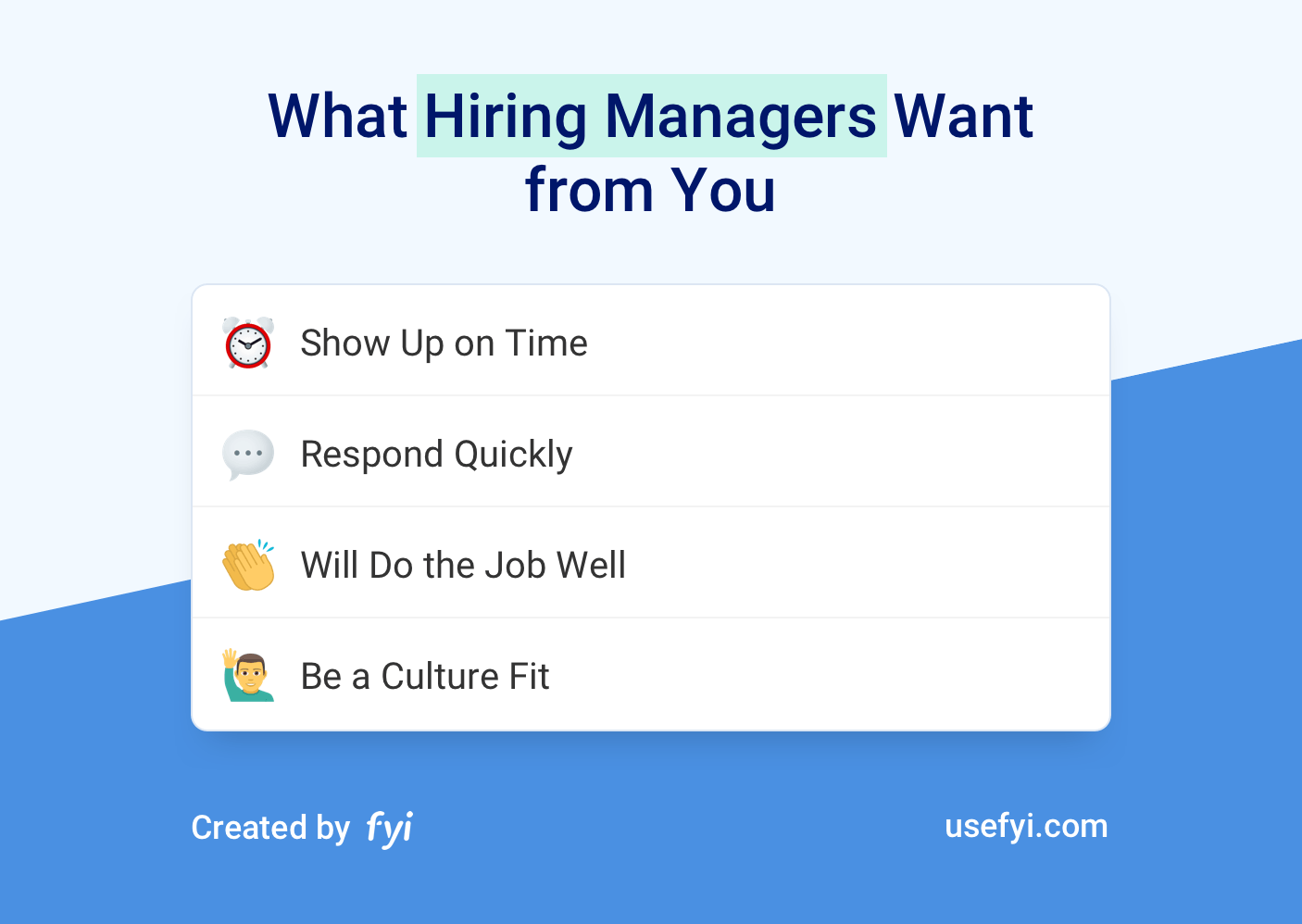 I’ve hired dozens of people over my career and have built multiple teams from scratch.

I can promise you that every hiring manager desperately wants to fill any open role they have.

Recruitment is a pain at every step.

Every day, the hiring manager feels the stress to get the role filled. They desperately want to hire someone.

Remember this when you’re applying to a job. The hiring manager is looking for reasons to move you forward, they want to hire you. It’s your job to avoid giving them a reason to pull you out of the running.

What is a hiring manager?

It’s a manager that has the authority to fill an open role at the company.

If a company is large enough, it could be a full-time position. As different roles open up, the hiring manager rotates through them and helps various teams bring on new folks.

In small and mid-size companies, team managers accomplish the tasks of hiring while also doing all their team management tasks.

If a candidate does decide to join the company, the hiring manager will hand things off to the onboarding manager.

So what does the hiring manager want from you? Four simple things. 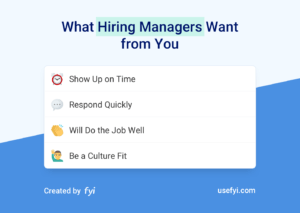 Show Up on Time

If you do nothing else, show up on time.

You’d be shocked at the number of candidates that arrive late to interviews. There are always a couple in every batch of candidates.

Here’s what arriving late communicates to the hiring manager:

Do whatever it takes to start the meeting at the exact time it’s scheduled. If the interview is at 10am, be there when the clock says exactly 10am. Or even 5 minutes early to be safe. But never 10:01 or later.

If the interview is early in the morning, set multiple alarms. If it’s over the phone, go to a location that has amazing cell reception. If it’s in person, drive over super early just in case there’s traffic or other delays. Then wait in your car until it’s time.

Do whatever it takes to avoid a delay in starting on time.

What if something happens last minute and you have to reschedule?

Stuff happens to all of us. Reasonable hiring managers know this.

If something happens on your end and you have to reschedule, let the hiring manager know immediately. Send a quick email like this:

“Hey [name of hiring manager], I really hate to do this but is there a chance we can reschedule my interview? I’ve just had an emergency come up.

I really appreciate your understanding on this.”

As long as you get the note out before the meeting starts, you’ll usually get a pass and it won’t be counted against you during the hiring process.

Make sure this doesn’t happen more than once though. When it happens twice with the same person, the hiring manager will assume it’s a habit.

There’s a common saying in all types of sales: nothing kills deals like time.

When you’re applying to a job, you’re in deal mode. The faster that you can respond in order to move things forward quicker, the odds improve in your favor.

Whenever a hiring manager reaches out to you, find a way to respond instantly. You can’t control how fast they respond but you can control how fast you respond. Make it as fast as possible.

Early in my career, I applied to a job and had to complete a test project. I misread the prompt and completely messed it up. The hiring manager told me: “this isn’t what we’re looking for.” In most cases, that would have been the end of it and I would have been rejected. But you know what? I got the job. Because I turned around the test project inside of 24 hours, the hiring manager was so impressed with my speed and enthusiasm that they completely looked past the fact that I delivered the wrong project.

Speed gives you an enormous advantage and helps the hiring manager fill the role sooner.

That said, there are a few places where I slow things down deliberately. Making a decision on the final offer is a good example. If I get to the end of the process and get an offer to join the company, I always sleep on it. Even if the offer is amazing and exceeds everything I hoped for, I ask the manager for at least one day to respond. Every good hiring manager knows that this is a major decision and will be happy to wait a few days.

So when it’s time to make major decisions, feel free to slow it down and give yourself time to think.

For all the logistical stuff, find a way to respond immediately.

Will Do the Job Well

The first major hurdle that every candidate passes is demonstrating that they will, in fact, do the job well. The majority of the interviews and any test projects are geared to answer this question.

Surprisingly, this weeds the vast majority of applicants out. Most resumes communicate that candidates don’t have the experience they need for a role and candidates use precious interview time talking about unrelated experiences.

You have more control over this than you may realize.

Which candidate would you be more confident in? The candidate that frames everything under their pursuit of being better as a designer. We all assume that candidates focusing on one thing are better than candidates that have bounced around a lot.

In reality, we all bounce around a little bit. The difference is how we choose to communicate those backgrounds.

When telling your story, frame everything as a step towards the role that you’re applying for. This will highlight the experiences that have set you up to do that job well. These tactics also help:

Basically, use every opportunity during the hiring process to communicate your experience and results in the role that you’re applying to.

Be a Culture Fit

Lastly, prove you’re a culture fit and get the entire team bought in.

Good hiring managers know that their reputation is on the line. If they bring someone in that the whole team hates, it’s their fault. So they’ll be listening to feedback from the team very closely. Ultimately, everyone wants you to be able to fit into the culture and team.

The opinions of some folks will matter more than others. A no-hire vote from a key person could derail your recruitment even if everyone else loves you. Unfortunately, it can be difficult to tell who’s who from the outside. Here are a few rules of thumb:

So the biggest challenge is figuring out the different expectations from everyone so you can communicate you’re a great fit.

Now that I’m more established in my career, I don’t try to get everyone to like me. I try to be as honest and candid as possible at every step. I’m telling everyone on the team: “This is who I am, this is what you’re going to get.” I’m in the fortunate position to have plenty of opportunities to pursue so I can be a bit picky and look for roles that I’m going to be happy with over the long-term. Basically, I’m giving the team as much info as they need to determine if I’m a culture fit. And if they say no, I’m perfectly okay with that. We’ve both saved ourselves a lot of trouble by parting ways early.

Earlier on, I didn’t have this luxury. So how did I cope?

I worked to convey to each person during the interview process that I was a perfect fit for the company and exactly what they were looking for. These tactics have worked for me: