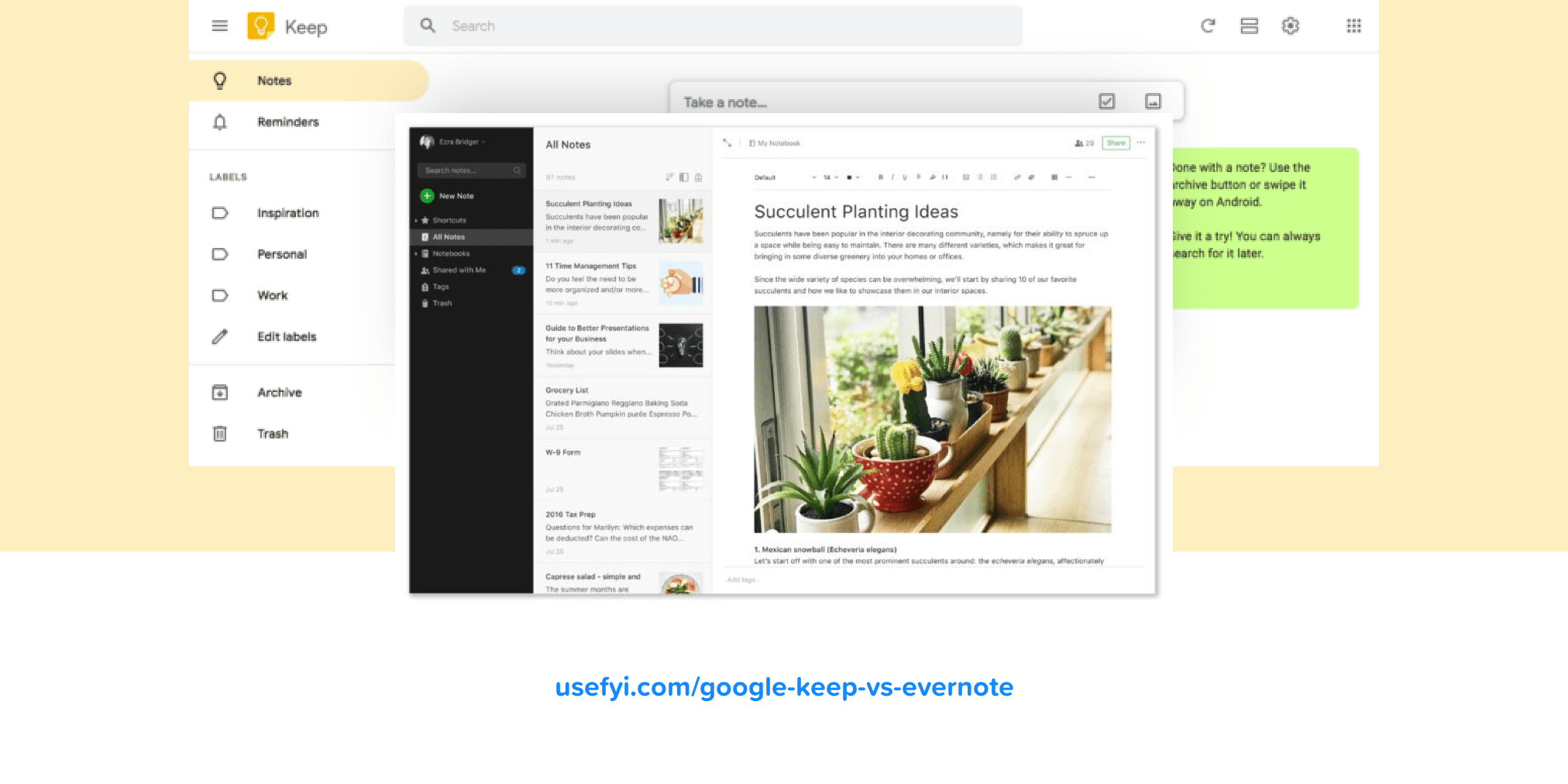 Released in 2004, Evernote is a note-taking app that used to be the undisputed king of personal productivity tools. However, after a series of botched product launches and a major managerial restructure in 2015, Evernote lost its way as a product. It strayed too far from its core value proposition of helping people “remember everything” and opened itself up to competition from Google, Microsoft, and other companies.

Evernote is still alive and kicking—for now. But, unlike in 2004, users have many more choices available to them today, one of which is Google Keep. Launched in 2013, Google Keep is a completely free, lightweight note-taking tool that offers some of the same functionality as Evernote. Is it any good, though?

That’s what we’re going to find out in this post.

We’ll be taking a side-by-side look at Google Keep vs. Evernote to see how the two tools stack up. We’ll include the pros and cons of each tool across a range of criteria, such as note-taking, ease-of-use, and integrations, before making our recommendation toward the end of the post.

Google Keep vs. Evernote—Post-its vs. Notebooks

Ultimately, the choice between Google Keep and Evernote doesn’t come down to features or functionality. It comes down to how you prefer to take notes.

Google Keep looks and feels like putting Post-its on a whiteboard. Evernote feels like writing things down in an actual notebook. That’s the biggest difference between the two tools. It’s not just about aesthetics. This dichotomy affects how the two products feel and what it’s like to use them.

Google Keep is almost deceptively simple. You can separate your stuff into two categories (Notes and Reminders), add custom labels to your notes, and archive or delete old notes. You can make quick text notes and to-do lists with checkboxes.

That’s pretty much Keep in a nutshell. There are no complex organizational options and no fancy templates—just notes, reminders, lists, and labels.

Evernote is a bit more fully featured than Keep. Notes are stored within Notebooks, which can be organized into Notebook Stacks. Evernote has a pretty robust search function, complete with its own unique syntax and advanced operators. It can even search scanned images of handwritten notes for specific keywords. 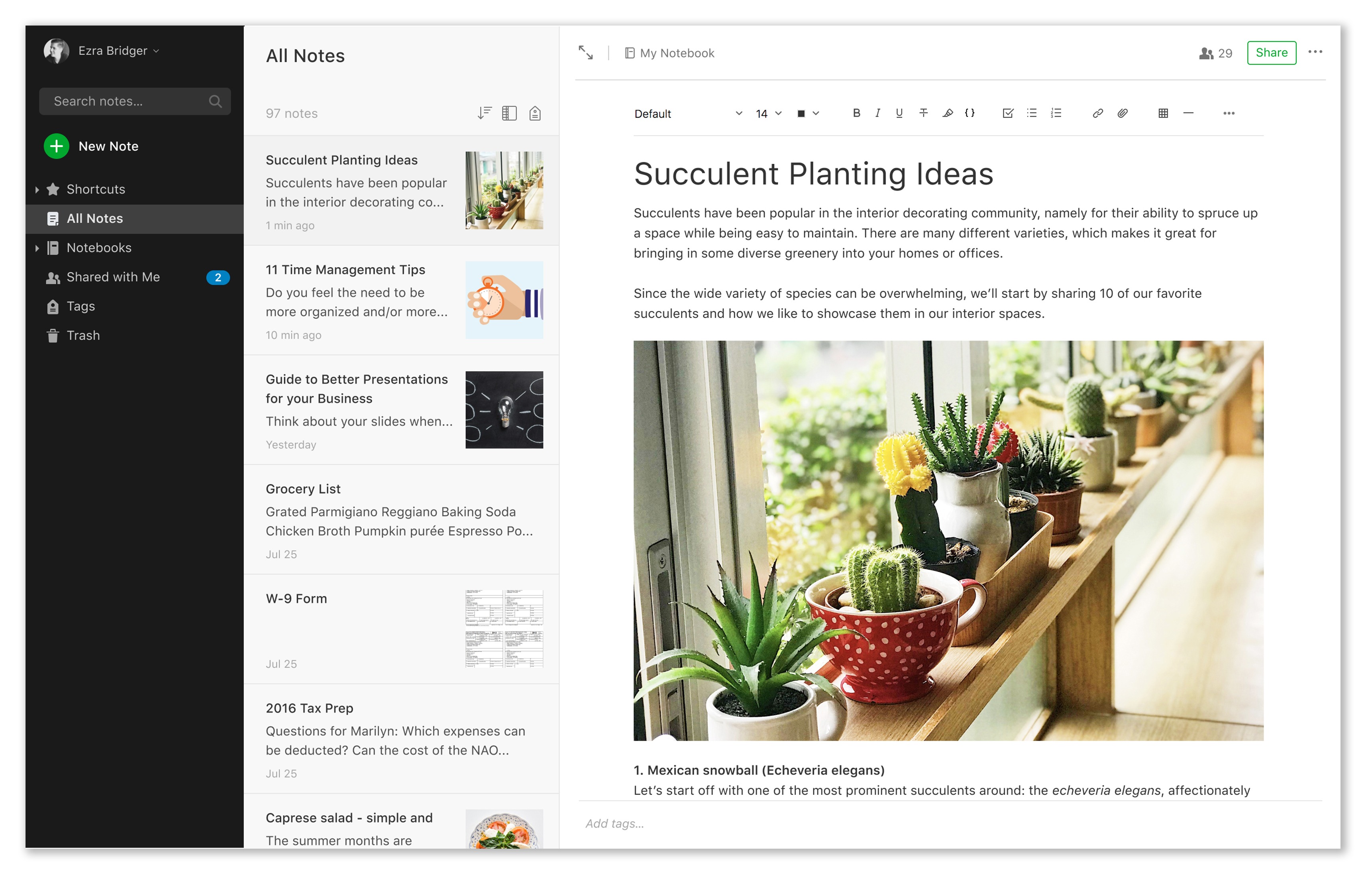 Let’s take a closer look at how Evernote and Google Keep compare.

Google Keep’s key advantage as a note-taking app is speed. Simply start typing to begin creating a note, then click “Close” when you’re done to create it. Once a note has been created, you can set a reminder, share it with someone else, assign a color code to it, add an image, or label it. You can also Pin notes to keep them prominently visible, and you can archive old notes when you’re done with them. 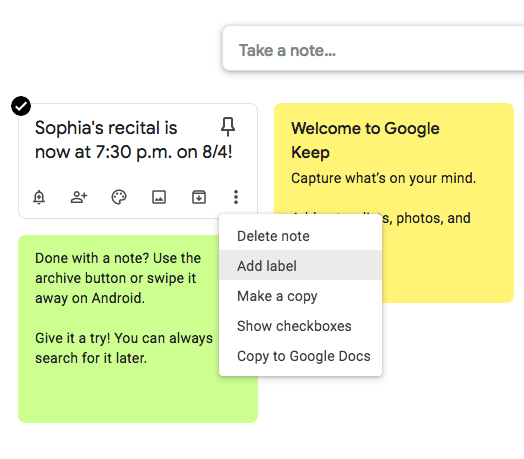 Unlike Evernote, Google Keep doesn’t emphasize organization of notes; it’s all about speed. You probably wouldn’t spend hours painstakingly organizing the many Post-its stuck to every available surface on your desk, so Keep’s organizational options are limited to color coding and labels.

Creating notes in Evernote, on the other hand, is more complicated.

On desktop, creating a Note in Evernote is needlessly frustrating. Upon opening an empty Notebook, you’re presented with a prompt to create a new note. However, you can’t click on the document icon or the “+” symbol in the prompt—you can create a new Note only by clicking the actual “+” button in the upper-left corner. It’s counterintuitive and just plain bad UX. 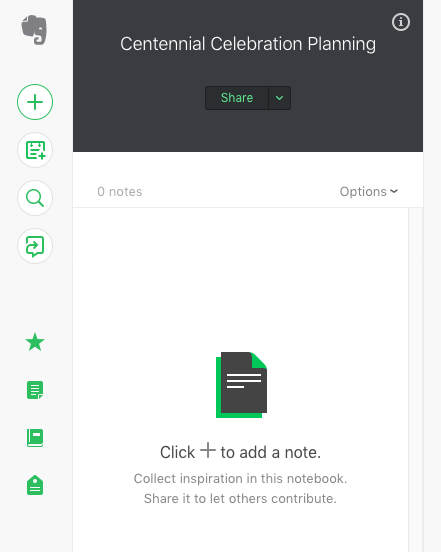 It doesn’t get any better once you start creating a note. Evernote gives you tons of formatting options when creating notes—you’ll see all of the formatting tools you’d expect to see when formatting a blog post in a dedicated CMS—but actually working with and formatting text is just as frustrating.

Unlike Keep’s checklists, which can be created as easily as bulleted or numbered lists, Evernote forces you to add checkboxes to list items as separate elements. This means that, to create a new checklist item, you have to create a new checkbox then type out the actual list item. You can’t convert a bulleted list into a checklist, for example. Creating notes on mobile is a bit better, but there’s simply no excuse for making note-taking—the very core of Evernote as a product—so complex.

Setting reminders isn’t as straightforward as it should be, either. Click the alarm-clock icon in the upper-left and you’ll be informed that a reminder has been set. Clicking the “Notify Me” button presents you with a range of options, but there’s no way to move backward through this process; if you change your mind and want to be reminded about an event the day after tomorrow instead of tomorrow, there’s no way to move back and change the notification. You have to create the notification and then go back and edit it.

Even if you’re happy with being notified “tomorrow,” you can’t set a specific time to be notified. In the example below, I told Evernote to notify me about this task via email tomorrow. Apparently, I’ll receive an email “first thing in the morning,” whenever that is.

Then there’s the issue of how Evernote organizes new notes by default. Unless you specify otherwise, new notes are created as Untitled Notes. If you keep creating quick notes without giving them titles, it won’t be long before you’re trying to find a needle in a haystack of Untitled Notes.

When it comes to search, Keep is faster, but Evernote has more options.

Searching in Keep feels much faster than searching in Evernote. But since Keep notes are simpler and have fewer organizational options, it’s not the fairest comparison. Simply enter a keyword in the search field, and Keep will scan all notes (including archived notes) for string matches. It’s fast and simple, and it works really well on mobile. 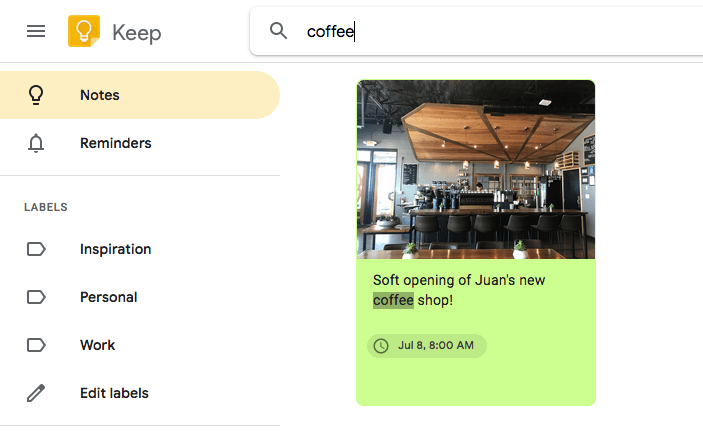 Evernote’s search feature is a little slower than Keep’s (particularly if you have lots of Notebooks or Stacks), but it’s a lot more robust. Evernote has its own search syntax, which is ideal for power users. It also boasts some advanced search operands that will feel familiar to anyone who has used Google’s advanced search commands.

Unfortunately, even simple keyword searches can cause Evernote to seize up or crash on desktop and the web app, which overshadows the tool’s admittedly impressive search tools. This problem isn’t unique to Evernote’s search function—generally, Evernote is still quite unstable, even after years of user complaints—it’s just especially visible when searching.

Evernote may have more search options, but they aren’t much use when they only seem to work half the time. As such, Google Keep edges out as the winner in this category.

Ease of Use: Winner = Google Keep

Google Keep might not have the bells and whistles that Evernote has, but its simplicity is Keep’s greatest advantage.

Since Google streamlined the UI of G Suite a few years back, most Google products now rely on the same design conventions, UI elements, and overall look and feel. If you use Gmail, you’re already most of the way toward knowing how to use Google Keep. However, like the best software products, Keep doesn’t assume a certain level of familiarity to use it effectively. Keep’s onboarding flow is quick and simple, and lets you get right down to creating and saving notes almost immediately. Even functionality that might not be as intuitive, such as adding images to event reminders, is easy to figure out.

Evernote, on the other hand, has become increasingly confusing over the years. As we noted in our review of Evernote, there are several inconsistencies between the desktop and mobile Evernote apps. That is particularly evident in the Work Chat function and in Spaces, Evernote’s half-baked, Slack-like collaboration tool.

It’s worth pointing out that Evernote isn’t a bad tool; it’s just not nearly as good as it used to be. Evernote is still arguably more accessible than tools like Notion that have steeper learning curves. But compared to the minimal simplicity of Keep, Evernote just doesn’t stand a chance.

One of the challenges that note-taking apps have to solve is cross-platform compatibility with the tools we use every day. After all, even the most capable note-taking app won’t be much use if it can’t access and store information from a broad range of sources. That’s why integrations are so important for note-taking apps—they have to fit into our existing workflows seamlessly.

When it comes to integrations, Evernote and Google Keep are on pretty equal footing. Evernote boasts a range of integrations with many of the most popular software tools out there. Since deciding to aggressively pursue business users in 2016, Evernote has added integrations with a wide range of productivity tools, including Gmail, Outlook, Google Drive, Slack, Salesforce, and Microsoft Teams. If you decide to take Evernote to work with you, it’s never been easier to do so.

Google Keep might not have as many integrations as Evernote, but it does have one key advantage: its broader integration with the rest of G Suite.

Moving between Keep and other Google products is practically effortless. You can drag and drop items from Keep into Docs, Sheets, or Slides. Obviously, Keep’s tight integration with Docs is the real focus here, though.

Ordinarily, we’d declare Evernote the winner in this round. However, Keep’s seamless integration with Docs and G Suite is so useful, we’re going to call this one a draw.

Evernote is a capable tool that can do a lot of cool things. It just doesn’t do enough things well enough to justify paying almost $100 a year for it—especially when Google Keep (and other note-taking tools) offer so much for free.

Although we have to recommend Google Keep to most users, there are some exceptions. If you’ve been using Evernote for years, there’s little point in disrupting your personal workflow to switch tools arbitrarily. Similarly, if you don’t use Google Docs or other G Suite products that benefit from integration with Keep, Google Keep’s simplicity might be a little too simple.

If you’re looking for a simple, lightweight note-taking app with a genuine emphasis on notes, you could do a lot worse than taking Google Keep for a spin. Evernote still has its uses, of course, but it’s getting harder and harder to recommend it as more note-taking tools emerge in the personal productivity space.