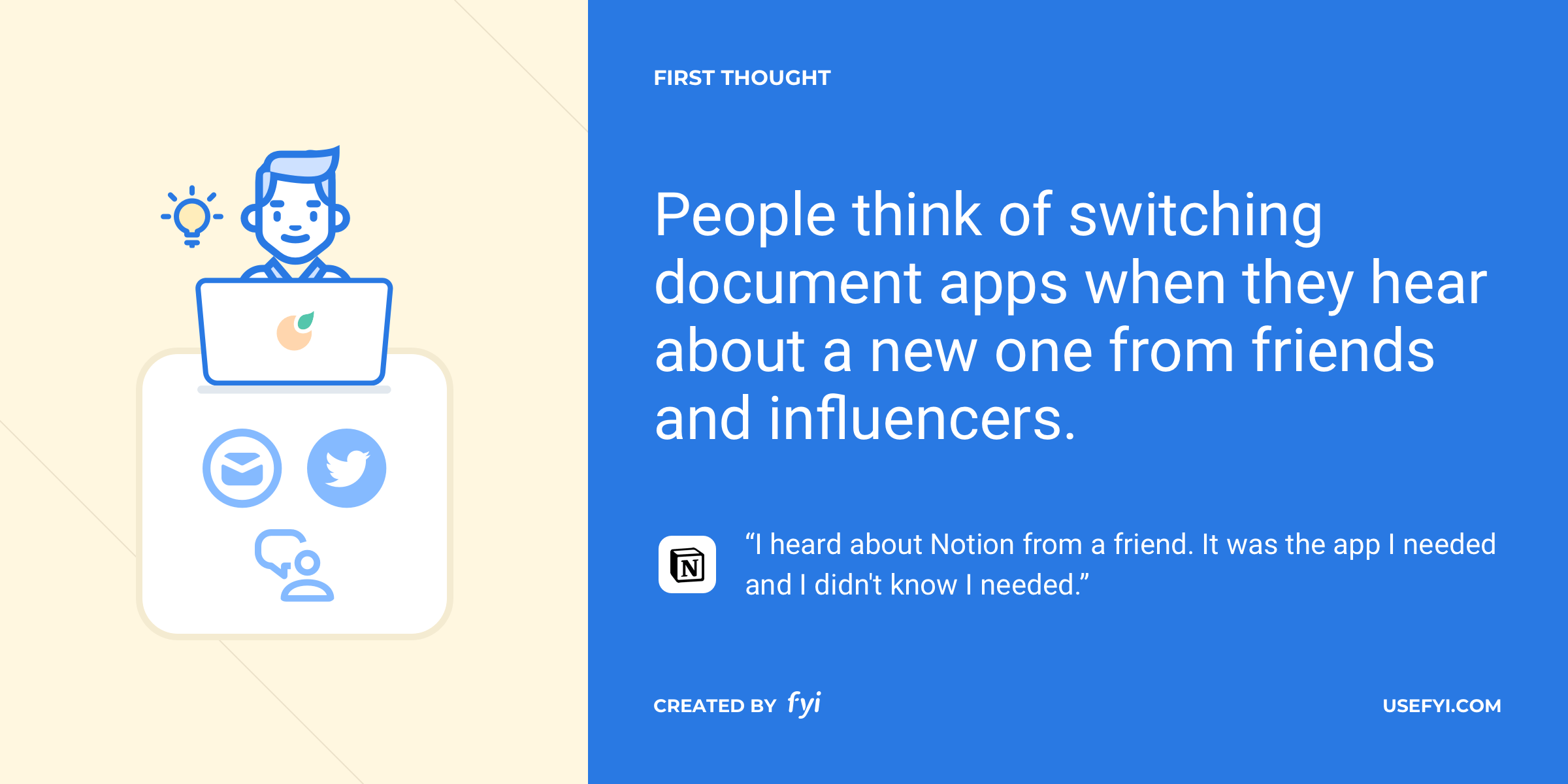 Every day, we use document apps to get work done. We practically live in them.

But people aren’t satisfied with their document apps.

Only two apps – Notion and G Suite – have satisfied customers based on their Net Promoter Scores. The rest tend to have more customers who aren’t very satisfied or are having bad experiences.

These low levels of customer satisfaction have caused new competitive apps to be developed and for customers to switch. Plus, low satisfaction is one of the reasons we all use lots of different apps at once. 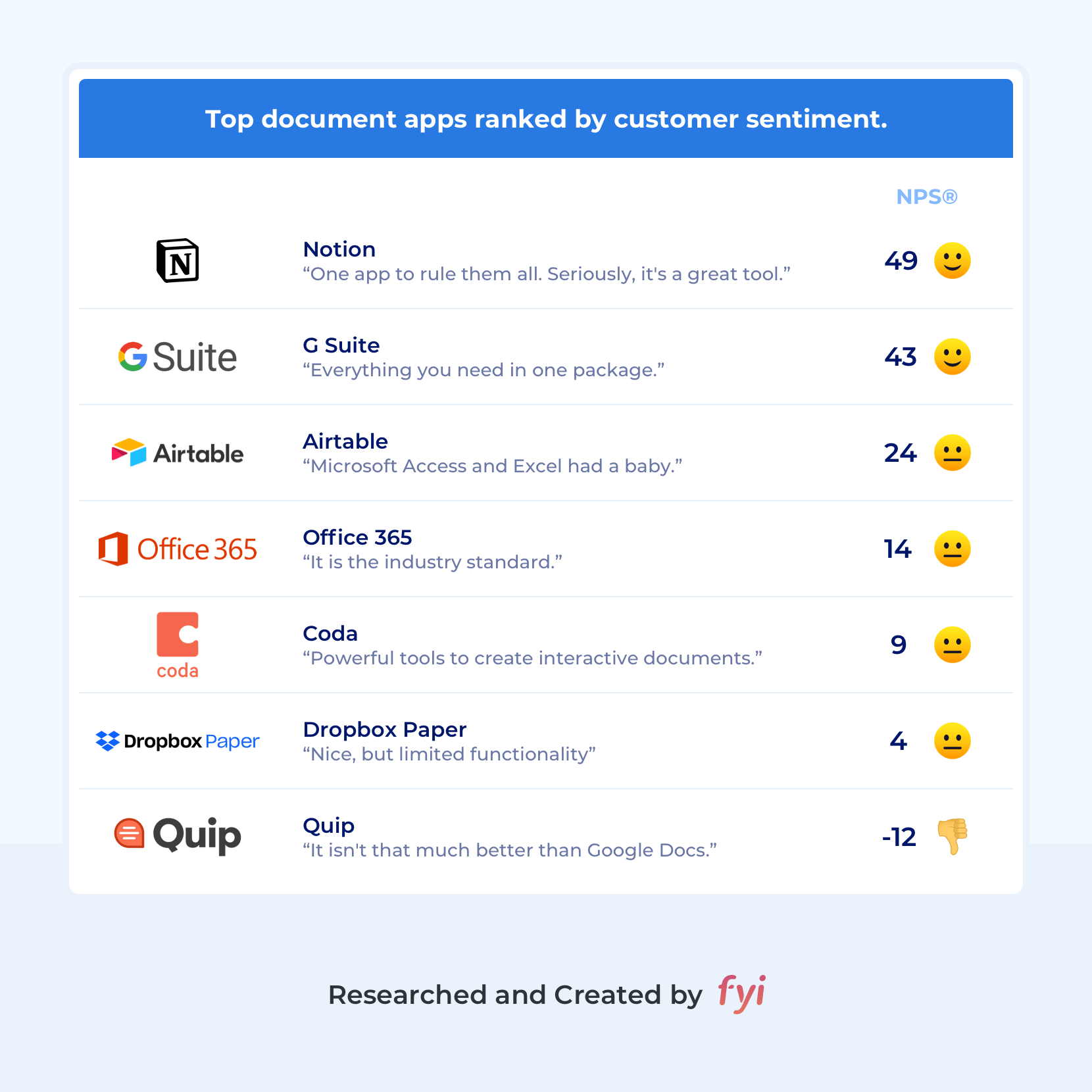 Notion, which only officially launched about 4 years ago, already counts more than 1 million users, and Airtable has over 80 thousand organizations using it. Coda launched two years ago and already has tens of thousands of users.

To understand exactly why people are switching to these new apps, we interviewed 20 CEOs and managers who recently switched to Airtable, Coda and Notion.

Are you using more than one document app on your team?
Get early access to FYI for Teams

We conducted the interviews by using The Switch Method, which is part of the Jobs-to-be-Done (JTBD) methodology. This approach helps identify the key moments that lead people to “fire” their current product and “hire” a new one.

According to The Switch Method, there are a number of steps and events that lead people to switch to a new product. We investigated these five steps in the context of switching to a new document app:

Here’s what we learned in graphic format, plus a detailed breakdown of each step:

First Thought: The moment when someone thinks about making a change for the first time.

We’re surrounded by recommendations for apps.

Scroll through Twitter for a few minutes and you’ll see people raving and ranting about the apps they love and ones they hate. Email newsletters and YouTube videos often feature recommendations. Plus, there are documents people share publicly like templates that increase exposure to apps as well.

The two reasons people first think about switching to new document apps are word of mouth and a desire to improve how they work.

When others rave about document apps, people get curious.

Thirty percent of people we interviewed heard of new document apps via word of mouth. And they weren’t even thinking about switching to a new app.

For example, some noticed people on Twitter talking about new apps:

“I heard about Notion from a friend who I hold in high regard and is very picky about the tools he uses. I decided to sign up and I saw how quickly I could build my wiki pages and add table components. It was the thing I needed and I didn’t know I needed.”

Others got interested when someone shared a document with them:

“The company I was working with was a Y Combinator company where we were helping engineers land their first job. One of the students shared a Notion document with me and I was like, “Wow!” I saw it was free and I created an account.” 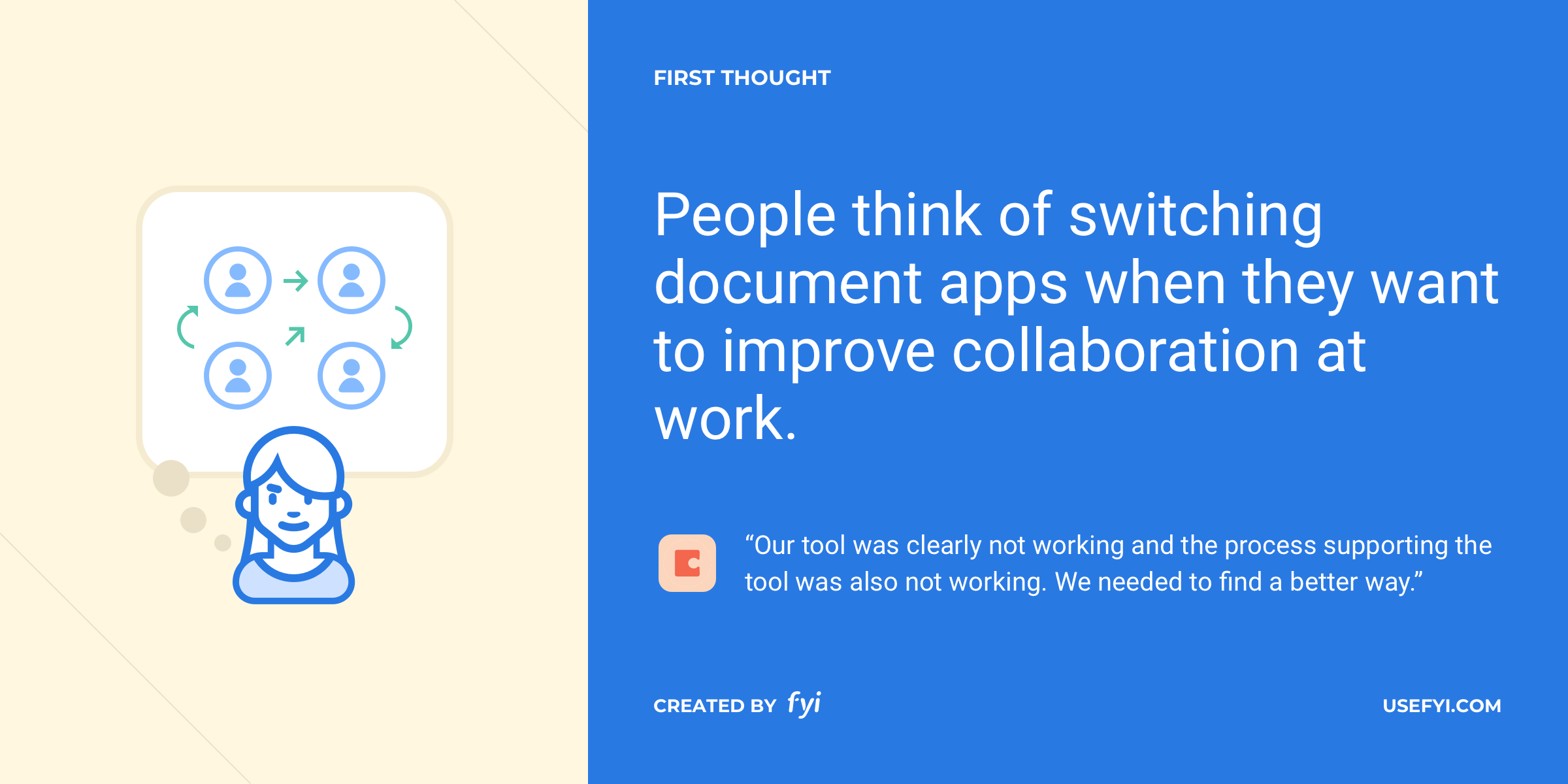 One third of participants thought about switching apps because they were looking to improve their existing way of working with their team or clients.

For example, one person wanted to improve the quality of information that was getting uploaded to their project management system.

Another had a poor experience collaborating with teammates, which led them to consider switching for the first time:

“When I started my company, I tried using Apple Notes to collaborate with the rest of the team but it sucked. The docs weren’t syncing and we just weren’t working together properly. That’s when we started thinking to switch to something else.”

Passive Looking: When a person knows a change needs to happen but doesn’t actively seek out a new solution.

Finding information about new document apps has become easy. It only takes a few minutes to learn about apps with a quick search on Google or Product Hunt.

Trying apps has also become easy. Thanks to their simplified onboarding and freemium offerings, it takes just a few clicks to get started. We found out that 65% of people sign up for a new document app without passive looking. 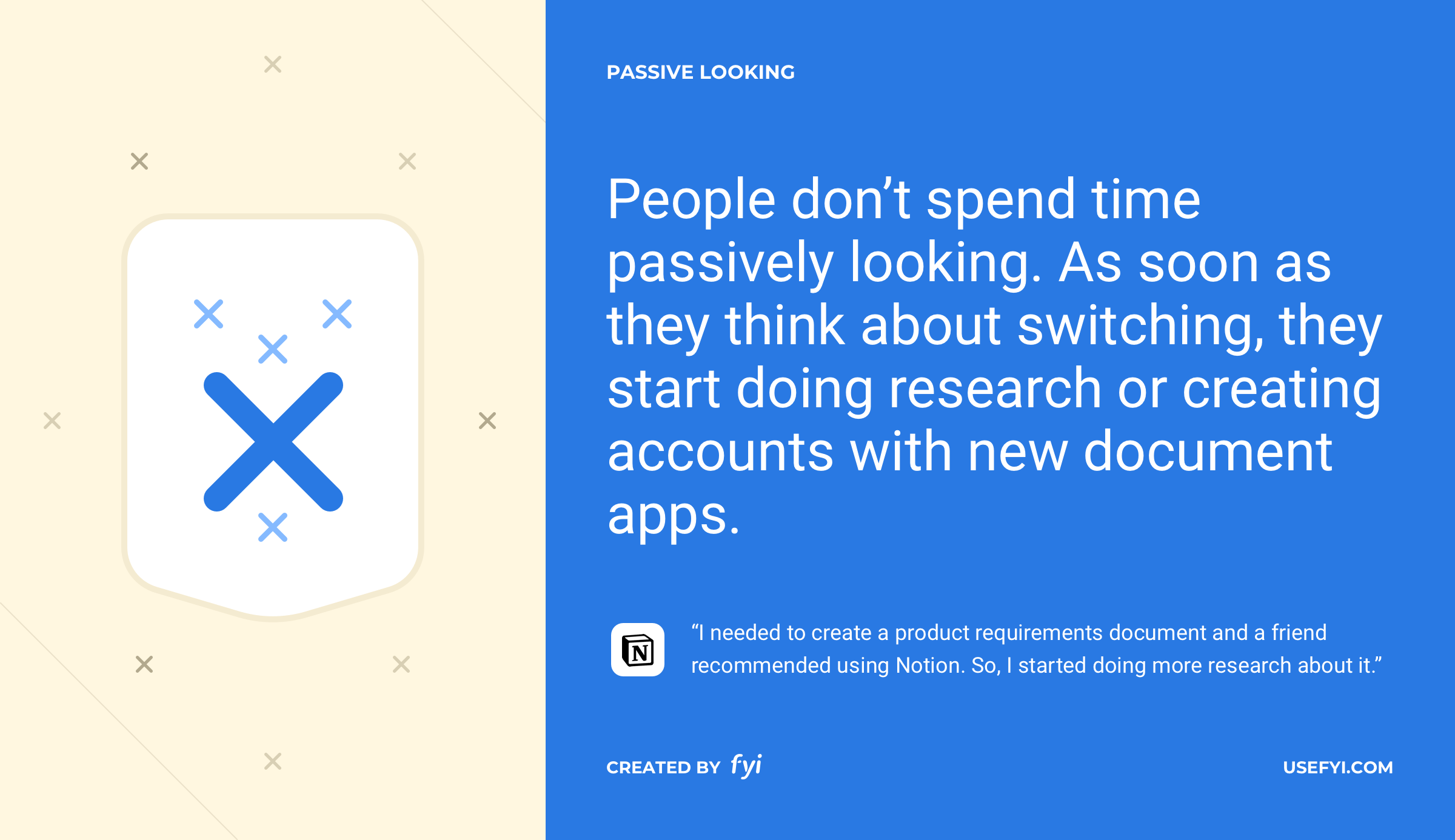 As soon as they think about switching, most people either start reading about new apps or try them out right away because it’s so effortless. They don’t spend time passively looking for a new document app.

For example, a person had Notion recommended to them by a friend and started using it just a few days later:

“I needed to create a product requirements document and I asked a friend for advice. He recommended using Notion. After some more days I created an account and started playing more with it.”

Another came across some templates from Airtable and used them to manage their projects:

“I found out about Airtable templates and I started using some of them to manage projects. And I had a Notion account that I wasn’t using but I remembered it had great editing capabilities. So, I started writing content in it and creating links to share it with our designers.”

Event #1: The event that makes the thought of switching to a new product more serious.

We asked people what made them serious about switching. Here’s what we learned:

Forty percent of participants became more serious about finding a new document app when they became unsatisfied with their document app’s functionality.

For example, one person wanted to organize their to-do list in a way that their app didn’t support:

“I wanted to sort my quarterly/weekly to-do list by project, client name, how much time I estimated each task would take me and the deadline date. I could do it with Google Sheets but I would lose some coloring settings I had set up. I just wanted to find something a bit smarter than spreadsheets.”

Another wanted to make an important document look nicer and couldn’t:

Active Looking: When a person starts investing more time and energy into finding a new product.

It’s become so easy to try new document apps that people don’t just try them one at a time.

Half of the people we interviewed tried multiple apps in parallel when they started investing more time and energy into their research about document apps.

Some people found these apps by Googling, others on Twitter or Product Hunt:

“The editing experience of Dropbox Paper was great but it was hard to find documents. One day I came across Slite on Product Hunt and I decided to try them. Another day I was chatting with my co-founder about tools to create “flexible lists” and he convinced me to try Airtable.”

Some went ahead and just tried different apps they had already heard about, and made the choice based on their own experience and if it felt like a fit for their team:

“I created an account with Coda and Airtable but they turned out not to be the kind of apps I was looking for. They were too complicated and I was worried people in my company would have not been able to use them. Notion instead was super simple to use.”

The Active Looking part of the process doesn’t happen overnight. On average, people spend one month actively looking for a new document app. That means it takes them about a month of testing different apps and creating documents in them before they find the app that best fits their needs.

Deciding: When a person makes their final decision to switch.

The increased competition in the document app space has led to better products. New products push the limits and create better ways to make, share and store documents. Which in turn inspires the older document apps to create new features in order to stay competitive.

Each document app has different functionality and characteristics.

We learned that 45% of people decide to switch to a new document app because they find the functionality they need. And 20% start creating important documents in their new app right away.

People keep looking until they find the right application for them. For almost half of the people we interviewed, this moment occurs when they find a document app with the functionality they need.

For example, a founder was trying to organize all the information for a product launch in Evernote. But he couldn’t do it in the way he wanted to in Evernote, it just got too messy. He tried Notion and found out about kanban boards, to-do lists and sharing links, which helped him get organized:

“Notion really helps me get organized. I can do to-dos, I can do can kanban boards and I can easily share documents. When they launched the links functionality to share documents, it reached the point where it had all I needed. That’s when I decided to switch to it.”

Another person was looking to streamline business processes and decided to switch to Coda when he found out that he could send a message to Slack by clicking a button from a document:

“I started playing around with Coda automation features and when I found out that I could send a message to Slack by clicking a button, I was convinced I found the right tool. It allows me to retain spreadsheet capabilities while also having automation features.”

This research helped us uncover the key moment that leads people to switching to a new document app.

Being unable to properly organize or share information is frustrating. Because it means losing the opportunity to make better and faster decisions or share them with others.

When people find an application that allows them to do so, they stop their research immediately. And they start exploring all the features the new app offers them to create modern documents. Many folks will quickly try multiple document apps over a month until they find one that fits. After that window closes, they’re no longer interested in trying new tools.

People love the moment when they realize they’ve found an app that gives them the power to organize and share information in a smarter way.

This is how new apps like Airtable, Coda and Notion gain users. Thanks to their flexibility and flow of new features, they allow people to create their documents exactly the way they want to.