Slack is a highly popular messaging app for businesses, allowing team members to remain in constant communication via text messages. It’s far more efficient than long email chains, keeping all of the related information within a single channel.

Slack chat functions work equally well in real time or asynchronously. Slack works so well that team members may leave it running on the screen for the entire business day.

As useful as text chat can be, though, sometimes you just need to speak to your team members face-to-face. Any time that in-person communication is not a possibility, you may want to make a quick video call from within Slack, so you can continue working without having to close Slack and jump to another app.

Slack gives you this ability, but is Slack’s video chat a better feature than simply starting a Zoom call? We’ll help you determine whether you can rely on the Slack video chat feature.

Slack video chat gives you the ability to start a video call with 1-14 other people from inside the Slack interface. Just click one button in Slack to initiate the video call. 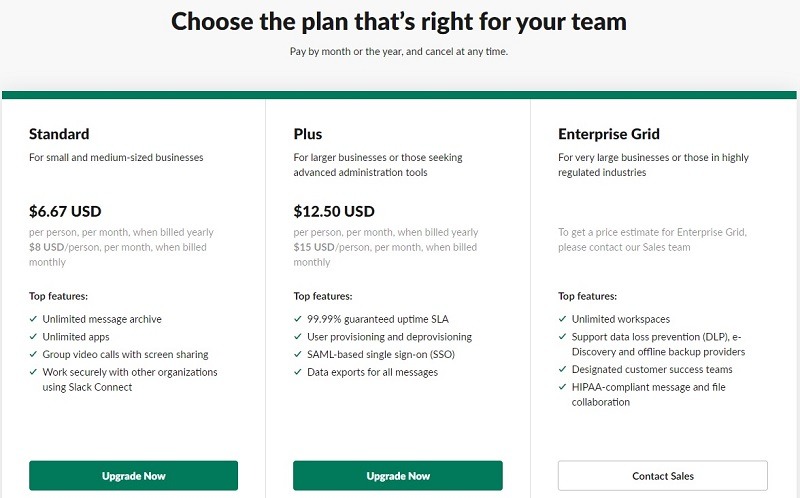 Slack offers four different tiers of service, one of which is free. The three paid tiers all have the same video calling features, so you will not receive any advanced video chat features by upgrading to a higher-priced tier.

The video chat features in the Slack tiers include:

Here are 10 of the most important features found with Slack video calling.

Here are five reasons to choose to use the Slack video chat function.

When you want to start a video call in Slack, you can initiate the process with one click. You have the option of starting video calls from within a direct message to one other person or from within a Slack channel to add several other people.

When you start a video call inside a Slack channel, Slack will generate a text message in the channel that alerts team members about the start of the call. Up to 14 team members can click the Join button to join you on the call.

You also have the option of inviting specific team members to your video call inside Slack by clicking the Add People button inside the call window. 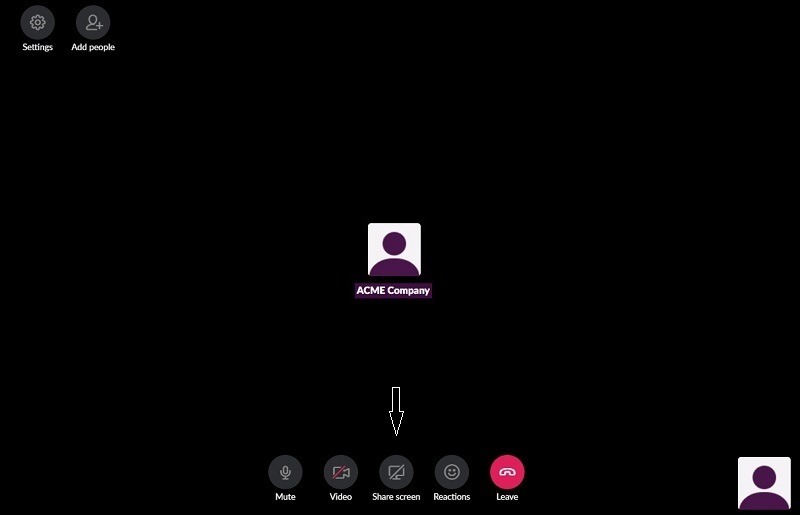 As long as you’re subscribing to one of Slack’s paid tiers, rather than working from the free tier, you will be able to share your screen with others during a group video call. This is a handy feature for helping those on the call understand exactly what you’re discussing. 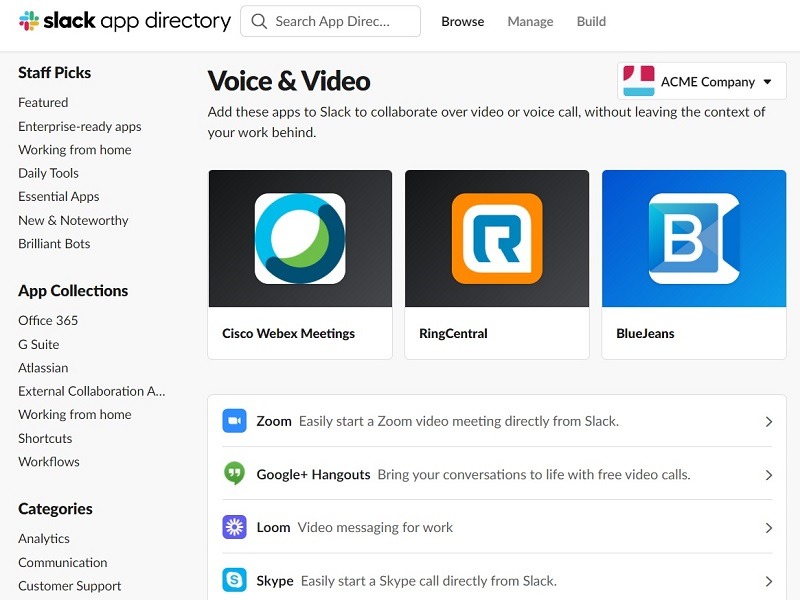 If you find that Slack’s video calling features simply are not powerful enough to meet your needs, you still have plenty of other options. One of Slack’s best features is its ability to allow seamless integrations with other apps. Once the integration occurs, Slack users can activate those other apps from directly inside the Slack interface, creating a high-quality experience.

Additionally, if the Slack administrator decides to designate one of these Slack video calling integrations as the default video calling app for your version of Slack, the administrator can set up Slack so the third party app takes over when you click the video call button in Slack, rather than having Slack start its own built-in video chat feature.

Some of the Slack video call integration options that you can use include:

Slack recently added support for making and receiving video chat calls within the mobile version of Slack. In the past, mobile users had a limitation of only participating in video calls with audio. This was a frustrating limitation for those who needed to link into a video call while they were out of the office.

Depending on the mobile device you’re using, you may find that the call quality is shaky, leaving you with some frustrations. But at least Slack now allows mobile users to attempt to join in on the video calls.

If your mobile connection is weak, you still can turn off the camera and listen to the call as an audio call only.

In the middle of 2020, Slack announced a partnership with Amazon. The primary news out of the partnership involved Amazon employees beginning to use Slack for collaboration. This will make Amazon the largest employee base to use Slack.

However, for non-Amazon employees, this partnership has some benefits related to video calling from within Slack.

Plans call for Slack to begin migrating its voice and video calling capabilities onto the Amazon Chime platform. By using Chime and using a greater reliance on Amazon Web Services, Slack should be able to greatly increase its video calling features, competing more favorably with services like Zoom and Microsoft Teams.

Creating this kind of collaboration gives Slack the ability to continue focusing on its primary text messaging and app integration collaboration features while relying on a third party to build out better video calling features, an area where Slack has struggled to keep up with the industry leaders.

Here are four reasons that you may want to go outside Slack when looking for video chat features.

When making video calls from within Slack, users may notice some problems with slow responses from the person on the receiving end of the call. The software eventually makes the connection, but it seems to take longer than with dedicated video conferencing apps like Zoom or Microsoft Teams.

Sometimes, the quality of the video call is less than desirable too. Users may experience more video pauses and screen freezes than what they find with dedicated video calling software.

The overall video call quality is better than it was as recently as 12 months ago, as Slack’s engineers have made improvements to this feature through regular software upgrades. But it still lags behind other options that focus on video calls.

Not Great for Video Conferences

If you’re looking for a video chat feature that allows you to hold video conferences with a lot of people at one time for giving a presentation or hashing out a project’s direction over an afternoon, Slack is not the best choice.

Slack has a 15-person cap on the number of participants in the video call, which limits its usefulness for this type of use case. Zoom, even its free version, is a far better option here.

When operating a video chat within Slack, you do not have the option of recording the call, which would allow others to watch the video chat later. This is a feature that’s commonly found with video conferencing apps like Zoom, Microsoft Teams, and Google Hangouts. 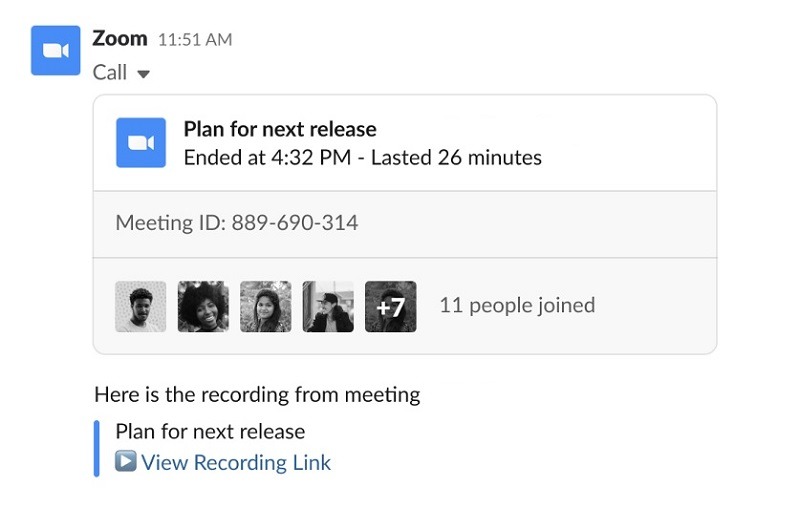 The Slack video chat features look extremely limited when stacking them up against the features found in apps that focus on video calling.

Slack video calls simply cannot match up against any of these advanced features, so if you need features like these, you’ll have to look beyond the built-in Slack video chat. 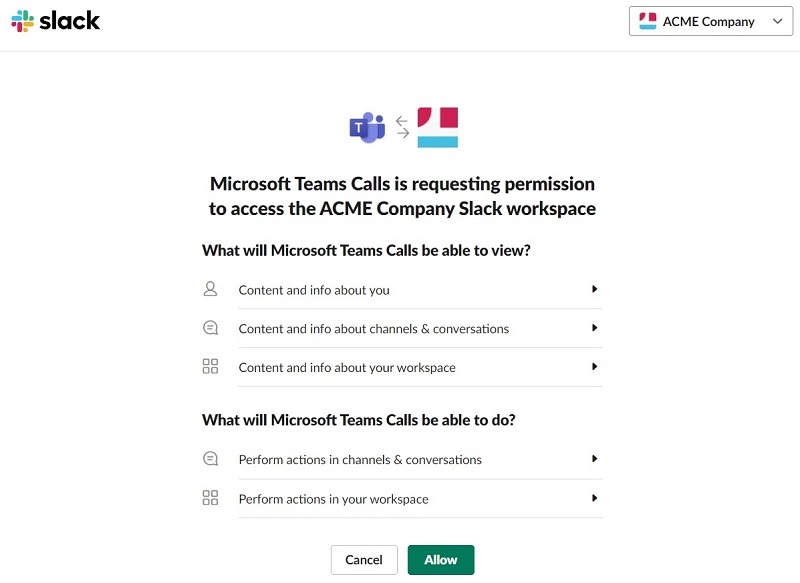 Our Recommendation for Slack Video Chat

Although Slack video chat is a handy feature to have as part of your Slack subscription, it certainly has significant limitations versus apps like Zoom or Microsoft Teams that focus specifically on video chat.

If you currently use the free version of Slack, we would have a hard time recommending that you upgrade to a higher pricing tier in Slack just to receive an improved video chat feature.

When subscribing to any of the three paid tiers of Slack, you will receive the ability to hold limited group calls with up to 15 members with screen sharing, which is a significant advantage over the one-on-one video call limitation in the free tier. However, unless you need some of the other features in the paid versions of Slack, you’re probably better served to go with a dedicated video calling app that you can integrate inside Slack, instead of spending money for a higher tier in Slack.

If you’re already using the Slack pricing tier that allows for video chat, then you certainly can use it for simple video calling needs. It does fine with the basics, especially for quick calls.

However, those who are looking for advanced video chat features will be better off with a subscription to Zoom, Google Hangouts, or Microsoft Teams. With one of those subscriptions in hand, the Slack user then can integrate the video calling app into Slack, gaining additional video calling features versus what Slack provides on its own, all while still using the Slack interface.