Slack is a highly popular collaboration tool for members of an organization or business. It allows for multiple types of real-time and delayed communication, both as part of a group and one-on-one. It has a great interface too. It’s easy to understand why it’s so popular.

However, just because it’s popular doesn’t mean it’s the perfect communication tool for everyone. Slack certainly has its drawbacks.

We’ll provide some ideas about the types of organizations for which Slack will be more of a hindrance than a help. We’ll also provide some alternatives that may fit the needs of a particular organization better than Slack.

Organizations That Should Avoid Slack

Certain types of organizations may find that Slack’s downsides outweigh the benefits. Consider these types of groups that may not receive a beneficial performance from Slack.

Slack has an easy-to-use interface that encourages quite a bit of freedom in the types of conversations and chat threads members of the organization will have.

Because of Slack’s strong interface and features, members of the group may default to using Slack for all kinds of communications, including those that have nothing to do with work tasks. This can lead to quite a bit of clutter in the interface and a lot of wasted time as users try to catch up with all of the different conversations, both those for entertainment and those for work.

Additionally, the way Slack provides notifications about new messages can significantly interrupt the workflow for those in an extremely busy organization. So not only can Slack lead to employees wasting time, but it can cause them to be less efficient with the time they are working.

Some organizations can handle this type of freedom and still complete tasks on time. Other groups may not be able to focus as much on work with this type of interface. It’s easy to go down a rabbit hole with some of the Slack collaboration and chat options.

Slack is supposed to encourage efficient use of time through improved collaboration, but for some groups, it ends up hurting productivity.

Groups That Can’t Afford It

Compared to some of the Slack alternatives we’ve listed below, Slack costs more. Slack’s pricing includes:

Slack does offer a discount for those organizations that pay annually instead of month to month, but it still has a higher overall price point than the majority of Slack alternatives. And while its free version is workable enough, especially for small businesses with few employees, it has some pretty hard limits to it–in particular, a limit to the number of chats kept in the chat history. So groups looking for a truly robust free option should look elsewhere.

Slack does an adequate job of protecting data and keeping collaborations secure. However, other types of collaboration software do a far better job with security than Slack, so groups with high-end security needs will want to look beyond Slack.

As an added concern, because Slack is a highly popular software tool, it becomes a tempting target for hackers. Slack engineers may struggle to plug every security hole quickly enough to beat hackers to the punch.

Groups That Rely on One Form of Communication Alone

For an organization that only uses email or text messages to communicate regularly, Slack may be overkill. Slack’s greatest advantage is giving users the ability to condense all communications into one area.

For groups that already have communication siloed in one area, Slack may just cause frustration. Rather than learning a new system, maintaining communication through the system that is working well now is a better option.

As the organization grows, and as the group’s communications needs become more complex, Slack, or one of the Slack alternatives, may be worth considering.

For organizations where Slack will not be a good fit, there are multiple other types of communications software that are worth considering. Here are the seven best Slack alternatives.

For those organizations already using multiple Google apps and seeking software that can facilitate communication and document sharing, Google Hangouts and Google Meet are strong Slack alternatives. Google Hangouts is a free version of the software, while Google Meet is part of the Google Workspace software suite (formerly called G Suite), which has a subscription model. Hangouts and Meet have very similar features.

Both of these Google tools work especially well for groups that make extensive use of Google Drive, Gmail, and Google document creation apps.

With Hangouts or Meet, users can perform document collaboration, hold chat sessions, or make video calls, all from the same interface.

The user interfaces for Google Hangouts and Google Meet won’t involve a steep learning curve, so members of the group can begin using it quickly.

These products do not have as many features as Slack, which is fine for organizations that have basic communications needs. 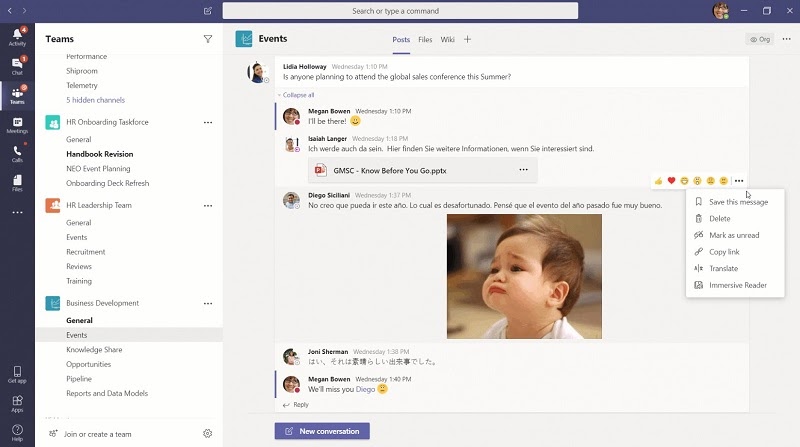 Microsoft Teams has a variety of communications options for members of organizations, including video calls, chat messaging, and document collaboration.

Microsoft offers Teams as a free, standalone version for those with basic collaboration needs. For those who subscribe to Microsoft 365, Teams is part of the subscription for no additional cost, which is a significant advantage for Microsoft 365 users seeking a Slack alternative. Teams integrates closely with the Microsoft 365 apps, simplifying use for Microsoft users.

For those who don’t normally make use of Microsoft apps and products, Teams may be difficult to learn how to use without some practice.

Although users can customize some aspects of Teams, it is a far more formal piece of collaborative software than Slack. Teams may not be quite as fun to use as Slack, but Teams’ rigid interface should lead to less time-wasting tangents too. 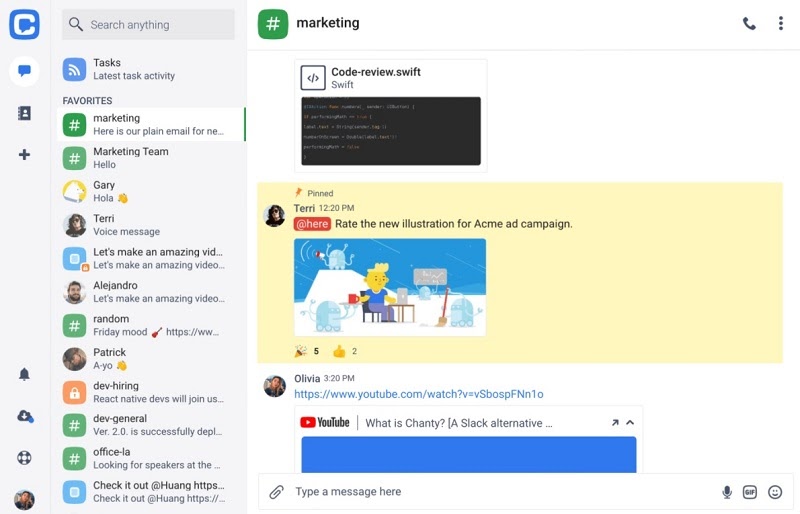 For those who dislike the quirkiness of Slack, Chanty’s interface has quite a few of the same aspects, meaning it may not be the best Slack alternative for those specifically concerned about the interface.

Where it differentiates itself from Slack is in its primary focus on work collaboration. It offers less of a focus on chat and real-time communications.

With Chanty, the loss of productivity that groups sometimes experience with Slack should be less prominent because of the focus on task completion and collaboration. Chanty has messaging features, but they’re tied directly to task assignment and completion.

Chanty offers a free version, but like Slack’s, it has a significant number of limitations. However, because the pay version is more affordable than Slack’s, most organizations will be able to jump straight into the subscription version. 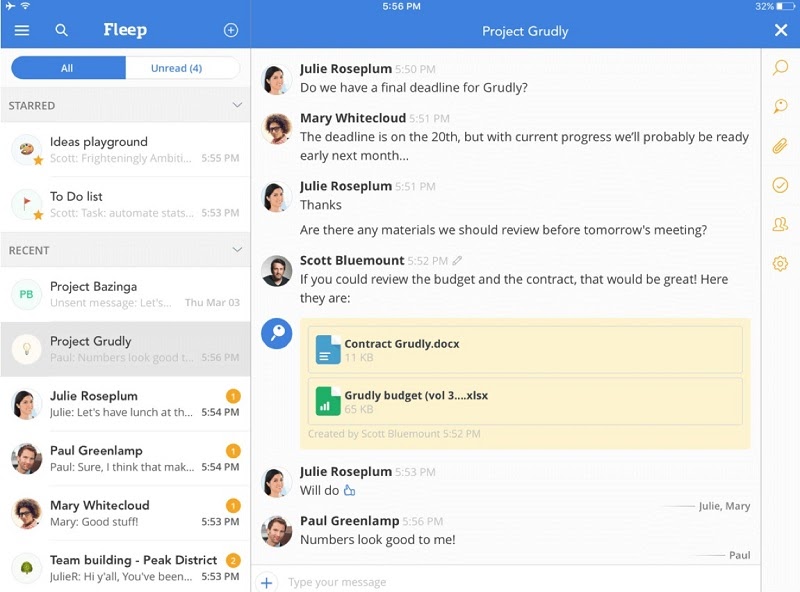 Among Slack alternatives, Fleep may have the cleanest interface. Members of the organization will not need to spend a lot of time trying to figure out how to use the software and app.

Fleep doesn’t quite have the level of features and real-time collaboration options found with Slack, but not every organization needs the full suite of features that Slack offers. One feature that we thought would be available with Fleep is built-in video chat, but Fleep unfortunately uses a third-party package to add this feature.

Fleep allows users to create a pin for the most important conversations, making it easy to revisit those conversations later.

Fleep offers a slightly lower price in its primary subscription version than what Slack offers. Fleep also has an Enterprise version for large organizations with customized pricing and some customized branding opportunities. 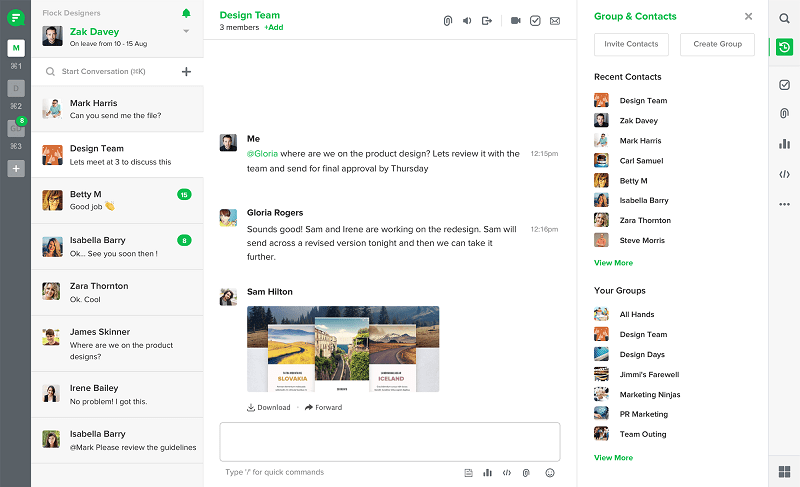 Flock has some interesting features that set it apart from other collaboration software options and make it worth considering as one of the best Slack alternatives.

For starters, Flock simplifies the process of creating and adding collaborative teams, allowing users to easily set up specific and distinct groups. Flock also has strong video calling features, making it easy to have several people on the same call at the same time.

The Flock interface is quite a bit different from other collaborative software options. It splits the screen into five vertical panels, allowing users to jump to the exact section of the software they need. What we’ve found is some people love the segmented nature of this interface, while others find it too cluttered.

Flock offers a lower price per user than Slack, and it offers a free version that has some significant limitations. However, organizations can have up to 20 users on the free version, which is more than most collaborative software packages allow. 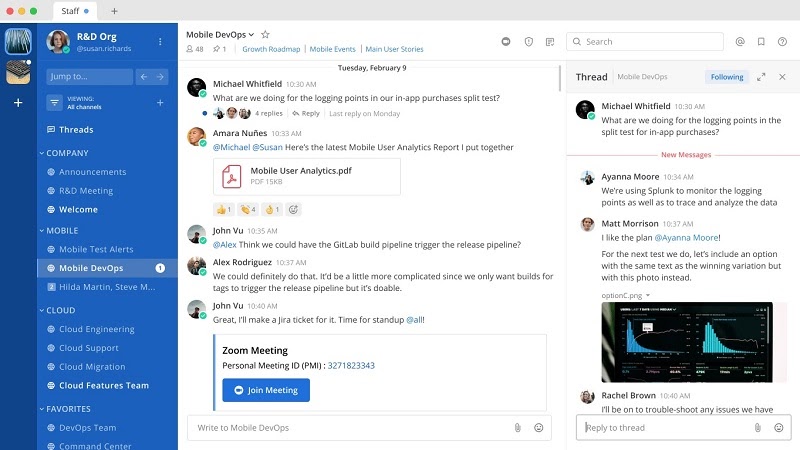 Among Slack alternatives, Mattermost is one of the rare pieces of software that offers either a self-hosted, on-premises version or a cloud-based version. This gives organizations quite a bit of flexibility in how they choose to use the software.

New users will appreciate the ability to begin using the software’s basic features with little to no training. However, for those who want to spend time learning how to use advanced features, Mattermost has plenty of them available.

Mattermost has options that allow for chat threads among multiple people in groups or one-on-one. Mattermost does not have built-in video calling and chatting, though.

Mattermost has a variety of pricing options, so users can find just the right price to match the budget that’s available. 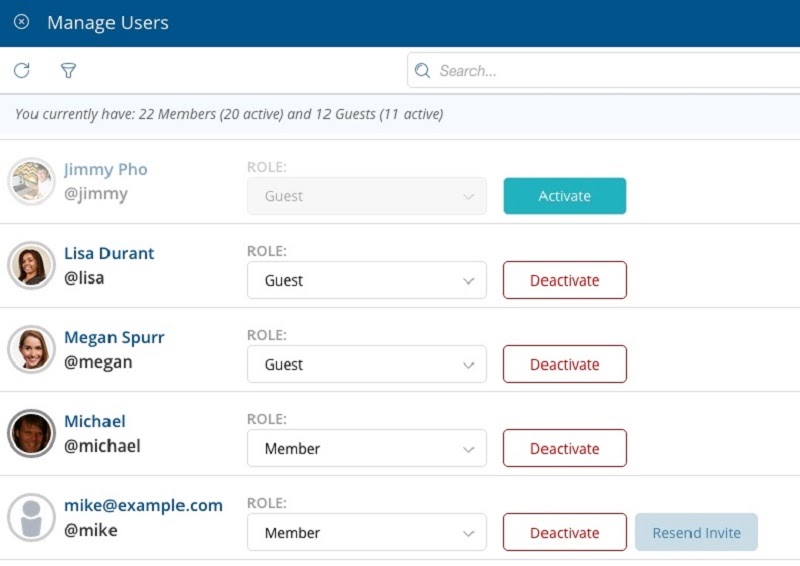 Ryver’s interface emphasizes helping users complete tasks, rather than allowing for random chats and conversations, which should help users in the organization remain focused on their tasks. They’ll use Ryver more for work and less for fun, keeping them more productive.

For each task, users can designate it as an individual task or as a group task, ensuring the group doesn’t waste time conversing about tasks that don’t involve them. Following the path of conversations becomes easier with Ryver than with Slack because of the lack of clutter and off-topic threads.

The interface is free of clutter too, helping users jump in and begin using the software immediately. The layout of the software makes a lot of sense, which saves time. Ryver has a video call component built into it, as well as audio chatting and calling.

One interesting feature involves the ability to integrate an organization’s RSS or social media feeds into the Ryver chats, ensuring everyone in the group always has the latest information at hand.

Ryver does not offer a completely free version, which may disappoint some groups. But with its group pricing structure, it differs from other collaboration software tools that charge per user. For larger organizations with 40 or more people, Ryver can become quite a bargain versus some other similar types of software.