Remote Desktop Protocol (RDP) is a tool to simplify the process of making changes to remote machines on your network. Through RDP, you can make changes to files or applications on the remote machine, while also updating its settings and software.

Without the proper RDP security measures in place, gaining remote access to another machine could leave your network open to hackers. Rather than using RDP for its intended purpose, hackers could gain access to the remote machine and, then, the entire network.

When running Remote Desktop on your Windows network, the most common security protocol in use is Network Level Authentication (NLA).

NLA works by forcing the machine that is requesting remote access to prove its identity. With NLA, this authentication process occurs without any need for user intervention and before the remote computer grants access to the computer making the request.

Windows makes use of NLA as the security protocol for the RDP process in part because it does not require a lot of computer resources to operate. This preserves more of the resources for managing the movement of data across your remote connection smoothly.

The Remote Desktop Protocol has had a number of security holes and vulnerabilities in the past several years. To avoid problems with these holes, you need to routinely install patches and software updates to ensure you always have the latest versions in place.

Over the past few years, a few of the most common ways hackers attack Remote Desktop include:

You can take a number of steps to provide a more secure environment for making use of Remote Desktop Protocol, including the following.

Example 1: Do Not Use RDP Over the Open Internet

The security measures associated with Remote Desktop Protocol work best when used inside a LAN. Using RDP involves setting up a peer-to-peer connection between the two machines, which requires direct access.

By default, RDP makes use of port 3389 to operate the connection between the two machines, whether over a LAN or the internet. Consequently, hackers will run random scans on computers using the internet through port 3389, looking for potential vulnerabilities related to RDP. They then may run a denial of service attack on that open port or may attempt a brute force attack through the port to try to steal RDP passwords.

If you must run Remote Desktop over the internet, you could use either port forwarding or run the connection through a Virtual Private Network (VPN).

Through port forwarding, you will create an association between the port on your router that contains your public IP address and the port and IP address of the remote machine you’re trying to access through RDP.

Port forwarding especially protects against denial of service attacks. It also simplifies the use of RDP on a network with a strong firewall.

For many remote users, making use of a VPN may be the easier option. In a basic sense, the VPN creates a secure tunnel between the remote machine and your network.

A home-based remote user could use the VPN all the time to connect to the company network over the internet, making the connection secure. Then, should you ever need to use RDP to access the remote user’s machine, the VPN is already in place, so you can use RDP securely.

Example 2: Set Up an RDP Gateway

With newer versions of Windows Server, you have the option of creating an RDP gateway server. This type of server can serve as a single source to manage multiple RDP connections. This is a simpler and more secure process than having separate requesting machines manage each remote machine.

With fewer machines involved in the connections, the chances of having an error or a vulnerability on any single machine will be lower.

One way to enhance the security in use with RDP is to limit the number of machines on your network that are able to use RDP. By limiting the number of machines involved, you will be able to better monitor and manage the machines that are using Remote Desktop. It becomes easier to make sure they have all of the software updates and patches they need. Some options for restricting access include the following.

You can set up your network firewall to restrict access to Remote Desktop to only particular IP addresses. When only certain IP addresses can use RDP to gain access to a remote machine, it limits the potential security vulnerabilities. Windows Firewall has a specific option for setting rules regarding the use of RDP and IP addresses.

By default, all administrators on your network will be able to use RDP to access remote machines. However, you should remove this access for administrator-level users who do not need it, minimizing security risks. With fewer accounts involved with RDP, you will have fewer accounts to monitor for security issues related to RDP, simplifying its management.

If possible, set up the network to isolate the server that makes use of RDP from the rest of the network. Should some sort of breach occur through Remote Desktop, hackers would then only have access to the single server, rather than using the Remote Desktop hack to access the entire network. Using this isolation technique is not always feasible, however.

A user might enter a username and password for one form of identity. The user then would receive a security token, such as a passcode, on a type of communication unique to that person, such as a smartphone text message or an email message. MFA may even require biometric verification.

Through the use of MFA, if a hacker is able to steal an RDP username and password, the hacker would not gain immediate access to the network. The hacker would also need to have access to that user’s smartphone or email account to finish the login process successfully.

Because brute force attacks are so common for hackers trying to take advantage of lax security measures with RDP, you should always require users to create extremely strong passwords.

Hackers know that people using RDP often do not make use of complex passwords. (Because of the frequency of this problem, some security professionals joke that RDP is short for really dumb passwords.)

When people use Remote Desktop to fix a quick problem, they may decide to go with a simple password to speed up the process. Instead, you should force anyone making use of RDP on your network to follow the same password complexity measures they use for any other password, including:

How to Get Started With Remote Desktop Protocol Security

To make use of Remote Desktop securely on your Windows network, you first will need to set up the network to allow for remote access.

First, establish a secure connection. Here’s how that works:

As you are enabling Remote Desktop using the steps listed here, you will want to be certain to force the use of Network Level Authentication for the connection. With NLA, you are requiring that the device making the connection and taking over the remote machine must authenticate itself before Remote Desktop will function.

The use of NLA limits the number of vulnerabilities that Remote Desktop could create. By forcing authentication from the computer requesting access, it limits the potential success for hackers trying to mimic a requesting computer. 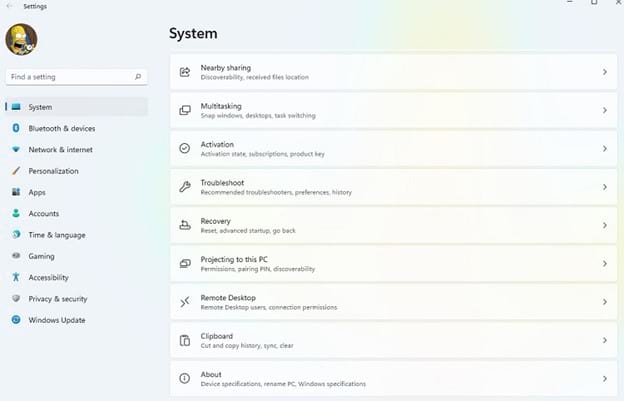 In the Remote Desktop window, slide the toggle switch to the right to activate Remote Desktop. Place a checkmark in the Require Devices to Use Network Level Authentication checkbox. Then click the Confirm button. You now are able to use Windows Remote Desktop securely with NLA. 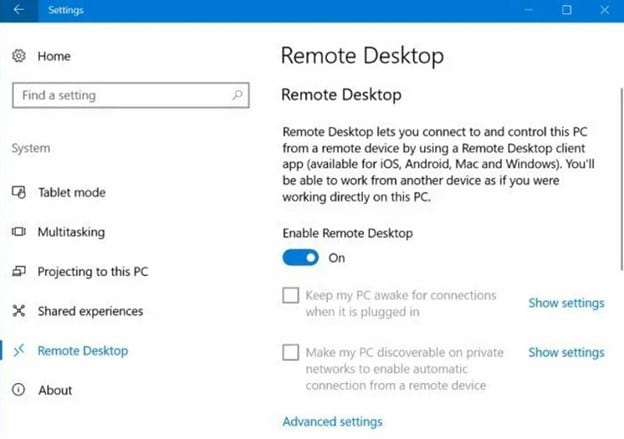 To activate NLA, click Advanced Settings toward the bottom of the window. Add a checkmark to the Require Network Level Authentication checkbox. Then click OK. 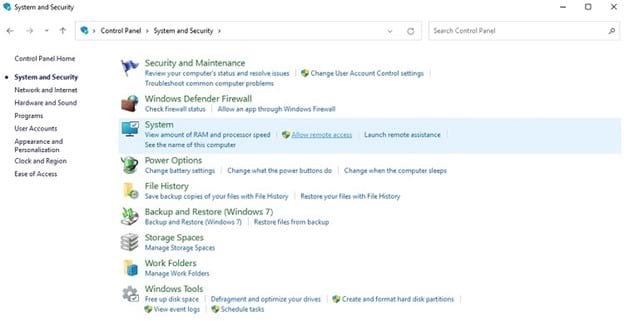 In the Remote Assistance section of the window, add a checkmark to the Allow Remote Assistance checkbox. In the Remote Desktop section of the window, activate the radio button for Allow Remote Connections. Add a checkmark to the Network Level Authentication checkbox in the same section. Then click the OK button.