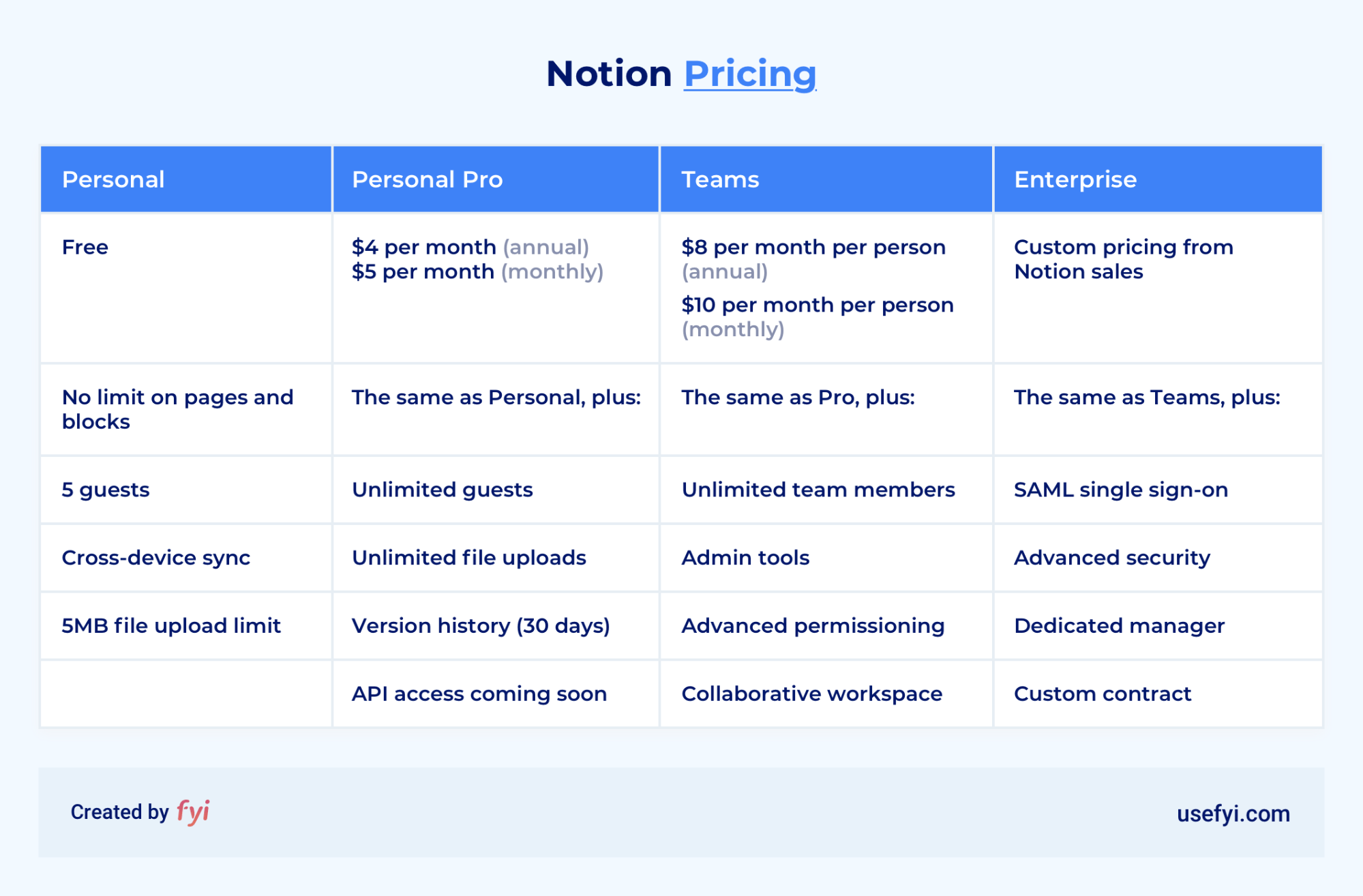 The ecosystem we’re used to using is one of islands of functionality. You use one tool for CRM, one for task management, one for projects, one for documents. Then you build bridges—APIs—between these “islands.”

Notion gives you the equipment to build everything you need all on the same island. No APIs or porting, no flicking between tools. You can do all the things that a plethora of other tools let you do, in a much more freeform way, inside the same tool.

This sounds too good to be true for a lot of people. And that’s what this post is about. Does Notion actually do these things well enough?

Notion, as we’ve said, contains within it the functionality of many other tools. Here’s a quick overview of what Notion can do.

Every new document in Notion is treated as a Page. Pages can be: 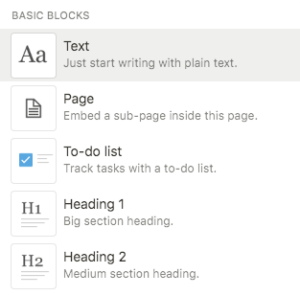 Blocks are the simplest building blocks in Notion—the Legos the whole system relies on. You can build anything in Notion from Blocks. There are over 50 types of Block in the simple block menu that opens every time you press Return or click the + symbol next to an extant block. You’ll find: 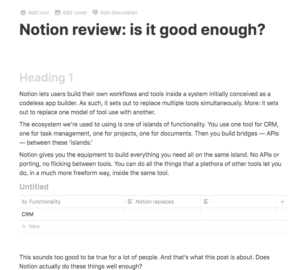 Open a new Notion page, choose a blank page and that’s what you’ll get:

The blankest page you’ll see in nearly any productivity app. But you can write documents in it, create tables where you need them, add images, and more. This post was written in Notion.

Charts can be created as blocks or pages. You can embed them inside things like documents, Kanban cards, and more. And you can switch between different views of the same information: from a table, to a visual chart, to a Kanban, just with a click. 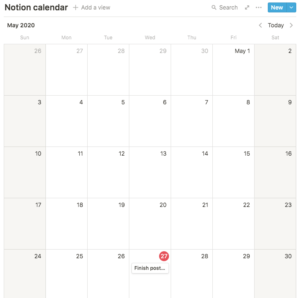 Notion calendars are easy to set up and can contain other types of Notion blocks and pages, such as Kanbans, calendars, and documents. The same information set can toggle between all the different types of displays available. Calendars offer:

Notion Kanban boards work much the way tools like Trello do. You can change board and lane names, add any content you like to cards, and change the number of lanes. You can add:

To-do lists are easy to set up as a block in Notion. Once you’ve chosen one you can check boxes by clicking and add new items by simply pressing return. The whole list remains a single block. You can create to-do lists inside documents or any other page, or you can move lists you’ve already created to be inside a new page, or the back of a Kanban card or calendar task. 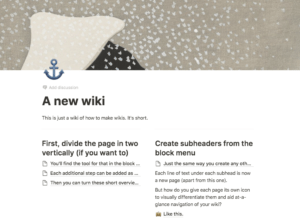 Wikis are linked collections of web pages that let users solve their own problems from pre-existing knowledge, and add to that knowledge too. The whole organization gets smarter and no-one has to reinvent the wheel. Notion wikis let you:

Notion creates a true database, not just a picture of one, when you create any structured data displays—like tables or boards. It uses both the free, cross-linking structure of the web, optimized for openness, and the traditional hierarchical file structure we’re familiar with from productivity tools and hard disks. Notion also lets you create custom database structures, using a blank template like the one above. Notion databases let you: 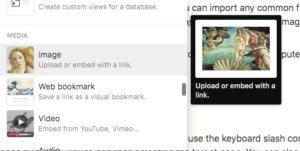 Notion lets you import or embed images. You can import any common file type, embed images from the web, or search Notion’s own Unsplash free image library. Images can easily be resized and moved around inside pages. You can:

Notion uses links to connect pages. You can use the keyboard slash command system to link to a page by typing /link to and then selecting the target page. 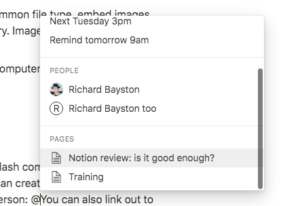 You can create hyperlinks inside Notion using the @ command and naming a page instead of a person. You can also link out to anything on the web.

Notion lets you import any file type and display it inside Notion. Most files can be imported or embedded. You can import whole web pages as Notion pages using the Notion web clipper, then edit them on the fly inside Notion. Exports are limited to CSV files and PDFs. 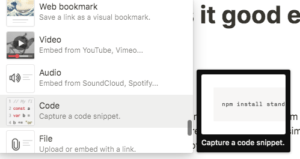 You can embed video, audio, images, and pretty much any other kind of content directly from the web into Notion. That includes interactive maps from Google Maps, Figma and Invision mockups, streaming multimedia, and Google Docs and Sheets.

You can mention people in Notion using the @ command, just like in Trello or Slack. Multiple people can work on the same page in real time, which means you can use a Notion page for team chats if you want.

You can add comments pretty much anywhere on the page⁠—to individual text snippets, to full Blocks, or to the page itself. And you can set reminders anywhere on the page by simply typing @remind followed by the date and time. When you mention someone in the same line, they’ll also get the notification.

What makes it different?

Notion is different from any other similar tool out there because it’s so completely open-ended, and because it’s a generalist tool that starts with “you can do anything,” then moves on to use cases. It was initially conceived as a codeless app builder, and it shows. 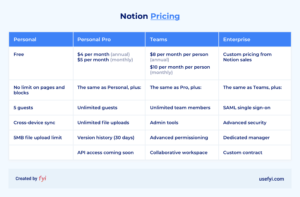 Notion pricing recently changed to include much more attractive personal plans with fewer limits, eliminating limits on block numbers that used to apply to the free plan, and allowing Personal Pro users to share and collaborate.

What are the reasons to use Notion, either as an add-on to the tools you’re already using or as a replacement for one or more of them?

Notion’s greatest strength is that it brings everyone together on the same page, literally and metaphorically. It makes organizing content extremely easy and simple, and solves a lot of the problems faced by teams that constantly find themselves searching for collateral, process guidance, or a tool they can use to all analyze a website or discuss a chart together. It’s a good project, task, and self-management tool.

Notion doesn’t excel at many other things.

It has CRM functionality, but it’s no Salesforce or Copper. It has project management functionality but it’s no Basecamp. And while the basic version of Trello is easily matched by Notion right out of the box, it doesn’t have the massive list of add-ons and plugins that Trello has.

What Notion is, though, is good enough. It does most things, from document creation to project tracking, well enough that in a lot of cases, only power users will notice the difference.

Notion has powerful database functionality. It creates real databases and lets users replicate, customize, and tinker with them until they match what’s needed exactly. This is difficult to find and most table-and-chart tools rely on external databases. In Notion, what you see is what you get.

Where does Notion fall short? Does it live up to its self-description as an “all-in-one workspace”?

Notion’s mobile app is a constant source of complaint from users. It’s not as full-featured or intuitive as the desktop version, and it’s glitchy when you try to use the web version of the app on mobile.

Can’t integrate with tools it replaces

Unfortunately, Notion doesn’t integrate with the tools whose functionality it replicates very well. You can’t embed Trello in real time or use Notion to feed information to and from your CRM.

Its all-in-one nature is supposed to solve these issues, but it’s a problem when different organizations use different tools. And if you need a really great CRM or document tool, you’ll need to go outside Notion.

Only the top plan is really effective

Notion has four pricing plans, and the first two are really not much use for teams. Only the top pricing plan is really effective. Granted, it replaces many standard tools to an at-least-adequate standard, but it still doesn’t leave you much leeway. And everyone has to have a Notion plan to collaborate, though people without a plan can see your content.

Notifications can be unreliable

The notification system isn’t fully reliable, and users can manage their own notification settings. That’s maddening if you want to chase someone about something they’re supposed to have done, and they have turned notifications off.

Notion has patches of missing functionality. For instance, because you can’t export easily it can’t be used for invoicing. In PDF form much formatting is lost, and CSV exports don’t retain anything but the text of a page. There’s a word count tool (if you’re wondering it’s in the top-right menu below Export) but no way to get the word count of a highlighted sample and no keyboard shortcut. You can’t work on PDFs inside Notion, and you can’t lock pages.

Our recommendation: A generalist that makes it hard to specialize

So should you move to Notion or not? The best advice we can give is: maybe. Notion will suit some users far better than others.

Who should use Notion?

Who shouldn’t use Notion?