If you’re concerned about cybersecurity and are interested in securing your network using Nmap vulnerability scanning, this article is for you.

Nmap is a powerful tool used by network administrators, penetration testers, and ethical hackers for network scanning and monitoring.

Let’s dive in deeper to learn more about how you can use Nmap for vulnerability scanning.

What is Nmap Vulnerability Scanning Anyway?

In cybersecurity terms, a vulnerability is a weakness or loophole left in software code that allows attackers to infiltrate a system and run malicious code or install malware.

Such an intrusion, when successful, can allow bad actors to steal or destroy data, take over systems and accounts, and execute unauthorized actions on behalf of the compromised user. 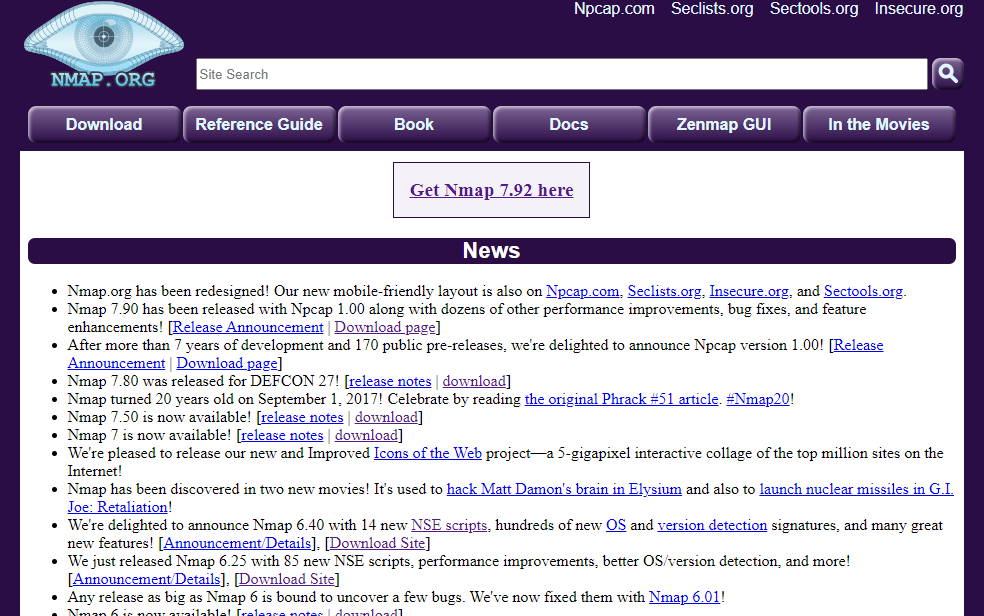 Nmap vulnerability scanning is the process of using Nmap to scan for and identify known vulnerabilities. Even though Nmap isn’t primarily a vulnerability scanner, the tool’s robust script library makes it possible for cybersecurity professionals to use it for this purpose effectively.

As an ethical hacker or a penetration tester, the goal of Nmap vulnerability scanning is to gather information about a target host, system, network, or an information technology asset, test it for weaknesses, attempt to exploit those weaknesses, and report on the findings so appropriate security measures can be taken to eliminate any reported problems.

Nmap vulnerability scanning may also be conducted to check the effectiveness of an organization’s security policy, adherence to compliance regulations, company-wide awareness of security measures, and the ability of an organization to flag and respond to security threats and violations.

In 2013, US officials acknowledged that cyber-attacks have become a bigger threat than terrorism. Attackers can use vulnerabilities in software code to disrupt computer networks, steal or destroy data, and take over systems and accounts.

With increasing reliance on digitization globally, such attacks can lead to major infrastructure problems for countries, be it power, transportation, agriculture, media, finance, or defense.

In 2021 alone, nearly 22,000 cybersecurity vulnerabilities were published, the highest number ever recorded in a year. This underscores the need for better awareness for individuals and businesses on staying safe online and effectively deploying the necessary cybersecurity tools available today.

This is Where Nmap Comes In

Nmap, also called Network Mapper, is a network scanner created by Gordon Lyon in September 1997. It is a command-line tool, initially developed for Linux but is now available on other operating systems including Windows, macOS, and BSD.

Nmap can probe networks in a variety of ways, such as detecting hosts, services, operating systems, etc by sending IP packets and analyzing the responses.

What Can Nmap Do?

Here’s a quick look at what Nmap is capable of:

Get detailed reporting on every IP on your network to figure out if a certain IP address is compromised and needs further investigation. Nmap can flag compromised IPs and report on whether they’re being used by a legitimate network service or a hacker.

Nmap can help you visualize and map out your entire local network. It can also show you a list of active live hosts, available ports, and the operating systems running on every device connected.

In addition to a number of network scanning functions, Nmap can also be used to identify vulnerabilities in your network. The tool gives you a front-row view of what attackers would see if they attempt to infiltrate your network defenses. This can help you prepare better for any future cybersecurity threats.

Nmap is a command-line tool. But it has a graphical user interface called Zenmap that can help you visually map your network so you can understand it better and prepare reports that are easier to understand.

The default command format for Nmap is:

You can simply write “nmap” and press enter at the command prompt for detailed instructions on each scan type and the options that can be used with them.

Here’s a quick summary of some common commands you can try when using Nmap:

A ping scan can return information on every IP active on your target network.

You can use the following command to run a basic ping scan:

Note: Port scanning can sometimes get you in trouble with the law or your employer. So, it’s safer to use the “-sn” parameter to disable port scanning when running a ping request.

Where port scanning is safe, there are numerous ways to do so. The differences among the various kinds of port scans are determined by whether you want to cover TCP or UDP ports and if they’re on a TCP connection.

For example, if you run a TCP Connect scan, Nmap is going to query every host on the network and request a response. On the other hand, the UDP scan would send UDP packets to scan DNS, SNMP, and DHCP ports to achieve the same result.

Let’s have a look at the different port scanning commands and options below.

Use the -p parameter to run a scan for a specific port:

Use a TCP connection to scan for a particular connection type—provided you specify the type of port:

You can scan a range of ports using hyphens:

Use the -top-ports parameter to specify the top n ports to scan:

Get detailed information on a certain host or a full range of IP addresses. Furthermore, get useful information about latency, MAC addresses, and descriptions linked to these addresses. This is a quick and easy way to identify and disconnect suspicious hosts from your network.

To scan multiple hosts simultaneously, simply write the host addresses one after the other with a space in between as shown below:

You can also scan the full subnet range using the asterisk (*) wildcard:

To scan particular subnets, simply type them out and separate them with commas:

You can tell Nmap to scan a full range of IPs by using a hyphen:

The same rules apply to hostnames. Just replace the IPs with hostnames and you’re good to go.

One of the most powerful abilities of Nmap is to run scans to identify what operating system is the target running. Every OS has its own set of vulnerabilities, so having this information forms an important part of the puzzle.

Nmap identifies operating systems by sending TCP and UDP packets to a certain port, analyzing the response, and comparing that response with its OS database.

You can run an OS scan by typing:

It’s important to note that OS detection isn’t always 100% accurate. It’s only one piece of the puzzle that needs to be seen in the context of other relevant information obtained about the target.

Stealth scans are executed to avoid detection by firewalls and security systems. This is achieved by avoiding a 3-way handshake between the systems. Nmap sends a SYN packet and analyzes the response from the target. If it also responds with SYN or ACK, that’s an indication that the part is open and a TCP connection can be established.

Use the following command to run a stealth scan:

This command scans several “most commonly used” ports of a target.

To execute this command, enter the following:

Where n is the number of ports you’d like to scan.

Output to a File

Sometimes, you’d want to share a log of the results you get from your scans instead of saving screenshots. Nmap allows you to save your scan results to several file formats.

Use the following parameters:

To save the results to a text file: -oN output.txt

To save the results to an XML file: -oX output.xml

As discussed earlier, the primary function of Nmap is not to scan for vulnerabilities. But the tool can be supercharged using scripts to obtain even more information on a target. Vulnerability detection is one such feature that is enabled via the Nmap Scripting Engine.

The Nmap Scripting Engine or NSE is an incredible Nmap feature. It’s a suite of scripts that you can use to find security weaknesses in your system. In addition, you can also write NSE scripts yourself using the Lua programming language to shape Nmap’s behavior according to your needs.

Three of the most popular scripts for Nmap vulnerability scanning are vuln, vulscan, and nmap-vulners. These scripts help to identify and retrieve information on countless CVEs every year and make Nmap a robust vulnerability scanner. 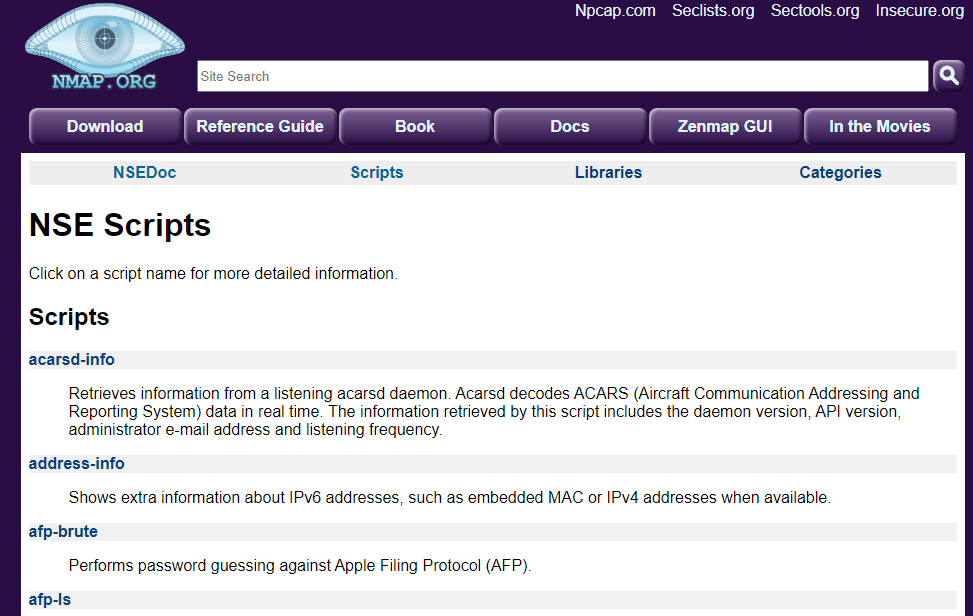 Vulscan has a set of comprehensive CVE databases that it queries when required. These databases are all hosted on the client’s system and include the following files:

Once installed, the vulscan script for Nmap can be activated using the following command:

Note: www.example.com is your target host.

Please allow some time for the scan to be completed. The result of the activity should look something like this:

| [CVE-2013-0198] Dnsmasq before 2.66test2, when used with certain libvirt configurations, replies to queries from prohibited interfaces, which allows remote attackers to cause a denial of service (traffic amplification) via spoofed TCP based DNS queries. NOTE: this vulnerability exists because of an incomplete fix for CVE-2012-3411.

| [CVE-2012-3411] Dnsmasq before 2.63test1, when used with certain libvirt configurations, replies to requests from prohibited interfaces, which allows remote attackers to cause a denial of service (traffic amplification) via a spoofed DNS query.

| [CVE-2009-2958] The tftp_request function in tftp.c in dnsmasq before 2.50, when –enable-tftp is used, allows remote attackers to cause a denial of service (NULL pointer dereference and daemon crash) via a TFTP read (aka RRQ) request with a malformed blksize option.

Nmap-vulners is another popular vulnerability scanning script. It relies on the Vulners exploit database when we execute the NSE script. To run a simple CVE or vulnerability scan, follow the syntax below after installing the script:

Just replace the IP given above with your target’s IP, and you’re good to go. Similarly, you can use a hostname instead of an IP address in the command.

The addition of the -sV parameter here ensures you get the version information of the services active on the host system.

DOS or Denial of Service attacks are among the most common and easiest attacks to carry out. That’s all the more reason for being prepared for them. Use the built-in DOS script to scan for DOS vulnerability. Type the following:

How to Get Started With Nmap Vulnerability Scanning 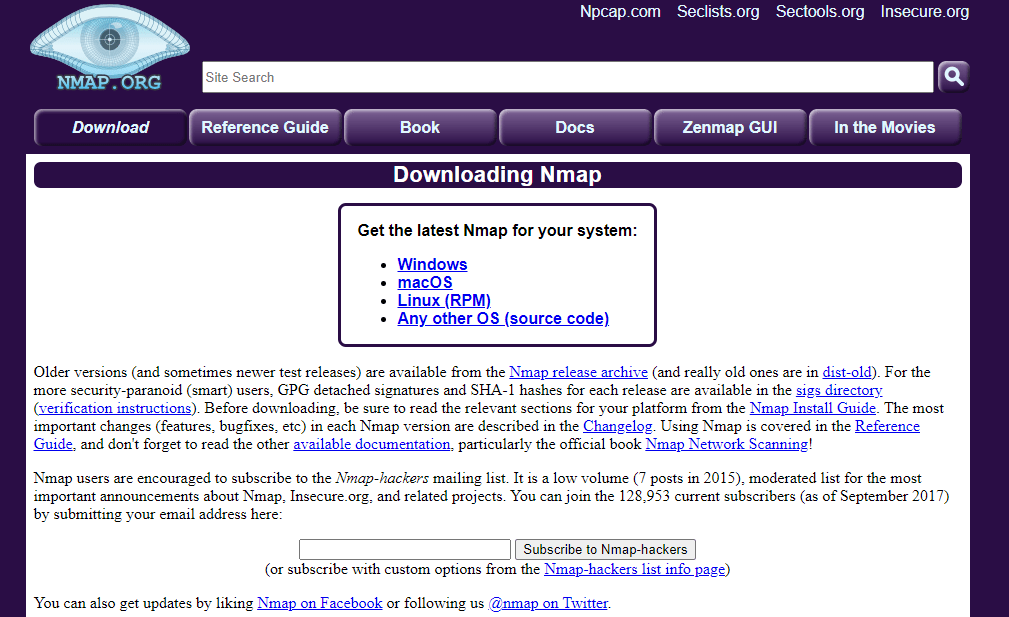 The first step in the process is to install Nmap for your operating system.

Follow the instructions of the installation package to set up Nmap on your system.

The commands used here to install the scripts are for Linux-based systems since that’s the dominant operating system for Nmap.

To install Vulscan, use the following commands:

To install Nmap-vulners, type the following:

The vuln script comes built-in with Nmap. To activate it in its most basic form, simply type:

Note: scanme.nmap.org can be replaced with your target host.

Note: www.example.com is your target host.