Jira is among the world’s most popular project management and workflow management tools for agile software development teams and tech startups.

Jira’s main strengths are its automation features that allow users to automate their tasks and project updates using if-then-else conditions.

Automation speeds up your work and frees up resources, and reduces the chances of any mismanagement in the project lifecycle.

This detailed guide reviews Jira’s core automation features and how they can help you improve your project management efficiency.

What is Jira Automation Anyway?

Jira Automation is a feature in Jira Software and Jira Cloud applications that allows users to fully automate their project management processes using if-this-then-that conditions based on different events in Jira.

It helps you automate routine tasks that collectively eat up hours of your time every week and allows you to focus on value creation and problem-solving tasks.

Jira Automation is a “no-code” feature meaning anyone can create automation rules in Jira irrespective of their technical or coding knowledge. 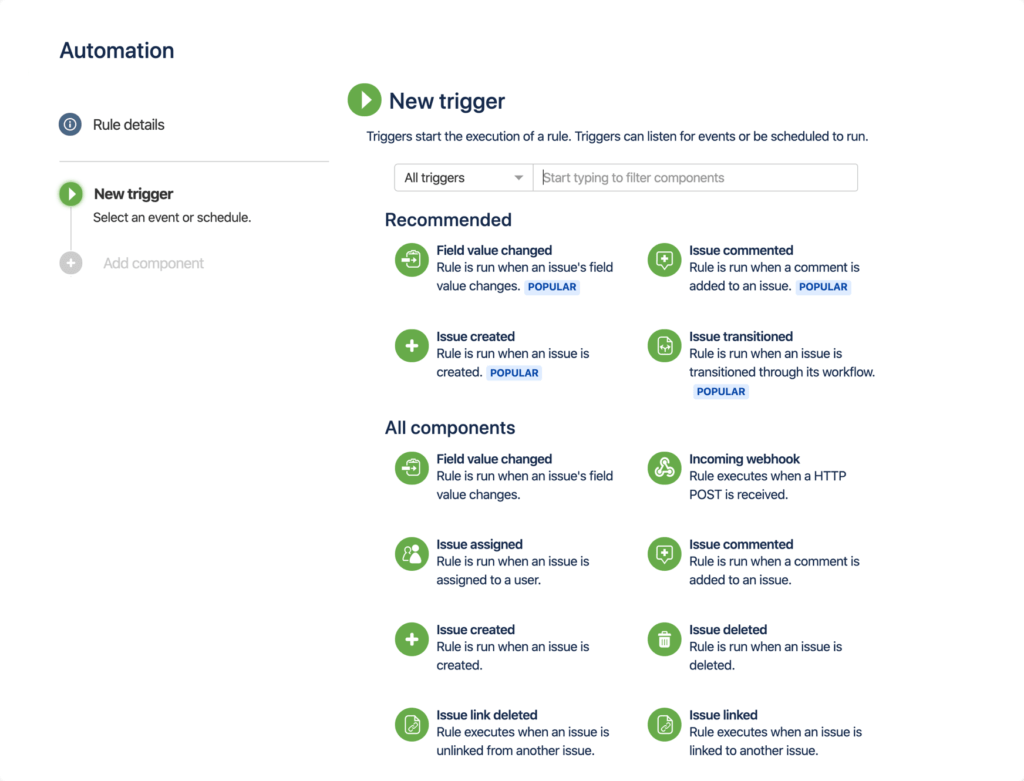 You can use Jira Automation for various tasks, including:

These and numerous other automation possibilities in Jira enable users to completely automate their workflow, minimize human dependencies, and streamline routine activities.

The users in Premium and Enterprise plans get global and multi-project automation features.

What is the difference between a single project and global automation?

In a single project automation rule, you can only create automation rules for a specific project. If you want to make the same rules for other projects, you’ll need to create them separately.

Who can create automation rules in Jira?

Let’s dive into the specifics of how Jira automation works.

Jira’s automation features are fundamentally based on if-then rules triggered in response to different events in Jira.

For example, you can set up an automation sequence to create alerts to relevant team members if your in-progress tasks exceed a certain threshold.

Or automatically create sub-tasks for every new issue made in your Jira boards.

However, all automation sequences in Jira rely on certain factors. You must understand what these factors mean to utilize automation in Jira fully.

Let us explore these factors one by one.

Rules or automation rules in Jira allow you to automate tasks and processes based on your defined conditions.

Every automation rule consists of triggers, conditions, and actions.

Triggers activate a rule, conditions define the criteria to narrow down a rule, and actions are the resultant actions it takes. 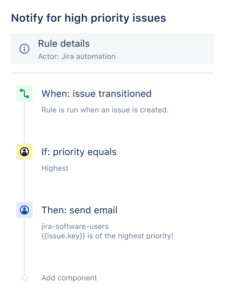 You can combine these three factors to create countless different automation sequences and workflows.

To make your job easier, Jira has an excellent library of automation templates listing some of the most popular automation rules worldwide. 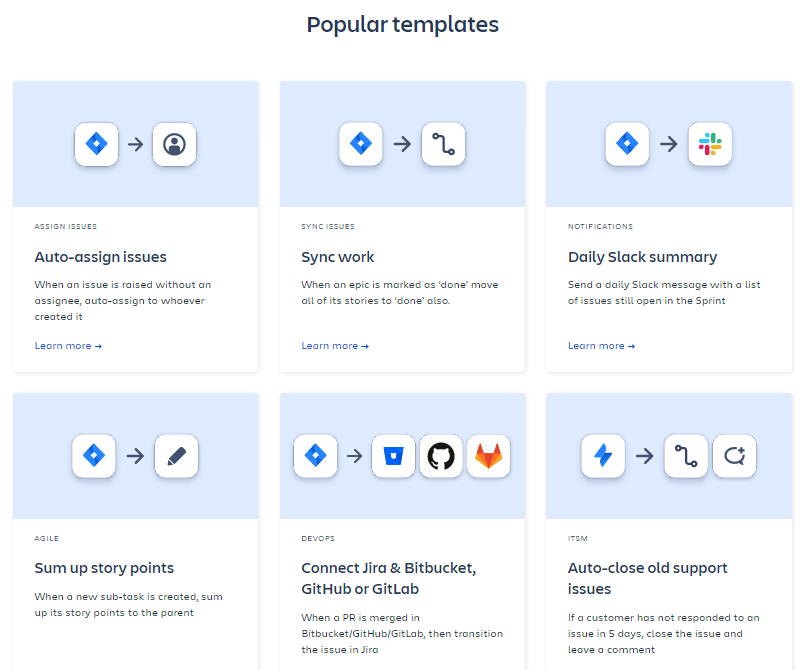 On every template page, you get detailed step-by-step instructions about using it with your Jira account. 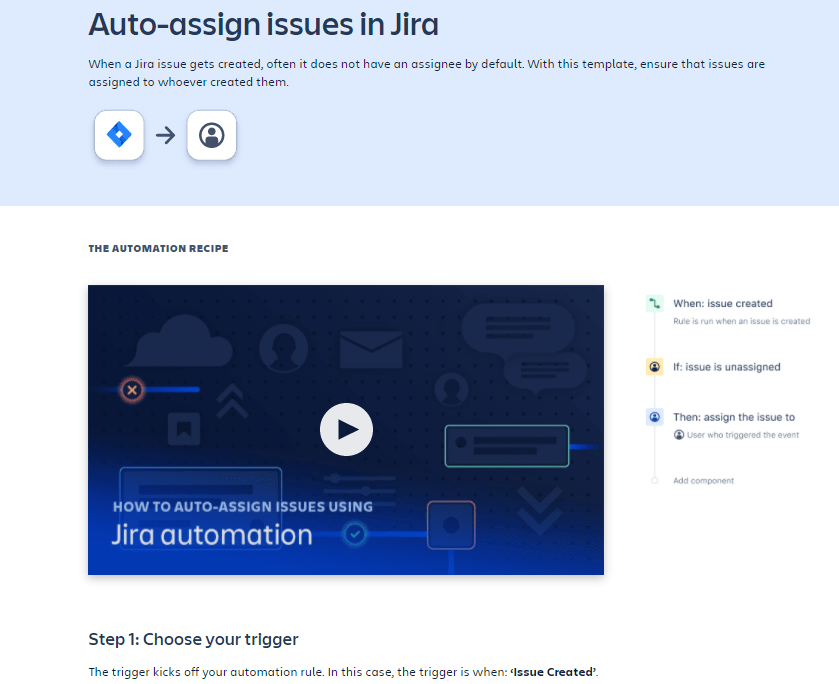 If you think a template is relevant to your business but doesn’t entirely fit your workflow, you can customize it in any way.

There’s also no limit to the number of automation rules you can create as long as there’s no overlapping between the rules.

A trigger is the starting point of an automation rule in Jira. Any event in Jira can be a trigger. For example, when a new issue is created, a subtask is completed, or a field’s value changes.

When a trigger occurs, it executes its automation rule.

There are various kinds of triggers, but some of the popular ones are:

You can view the complete list of triggers and their details in Jira’s documentation.

Conditions further qualify your triggers and determine whether your rule should be executed or not.

Triggers activate rules, and conditions determine if a rule should con tui running.

For example, you could trigger an automation rule when a new issue is created. But to further qualify this, add a condition that the rule will run only if the issue is of high priority. 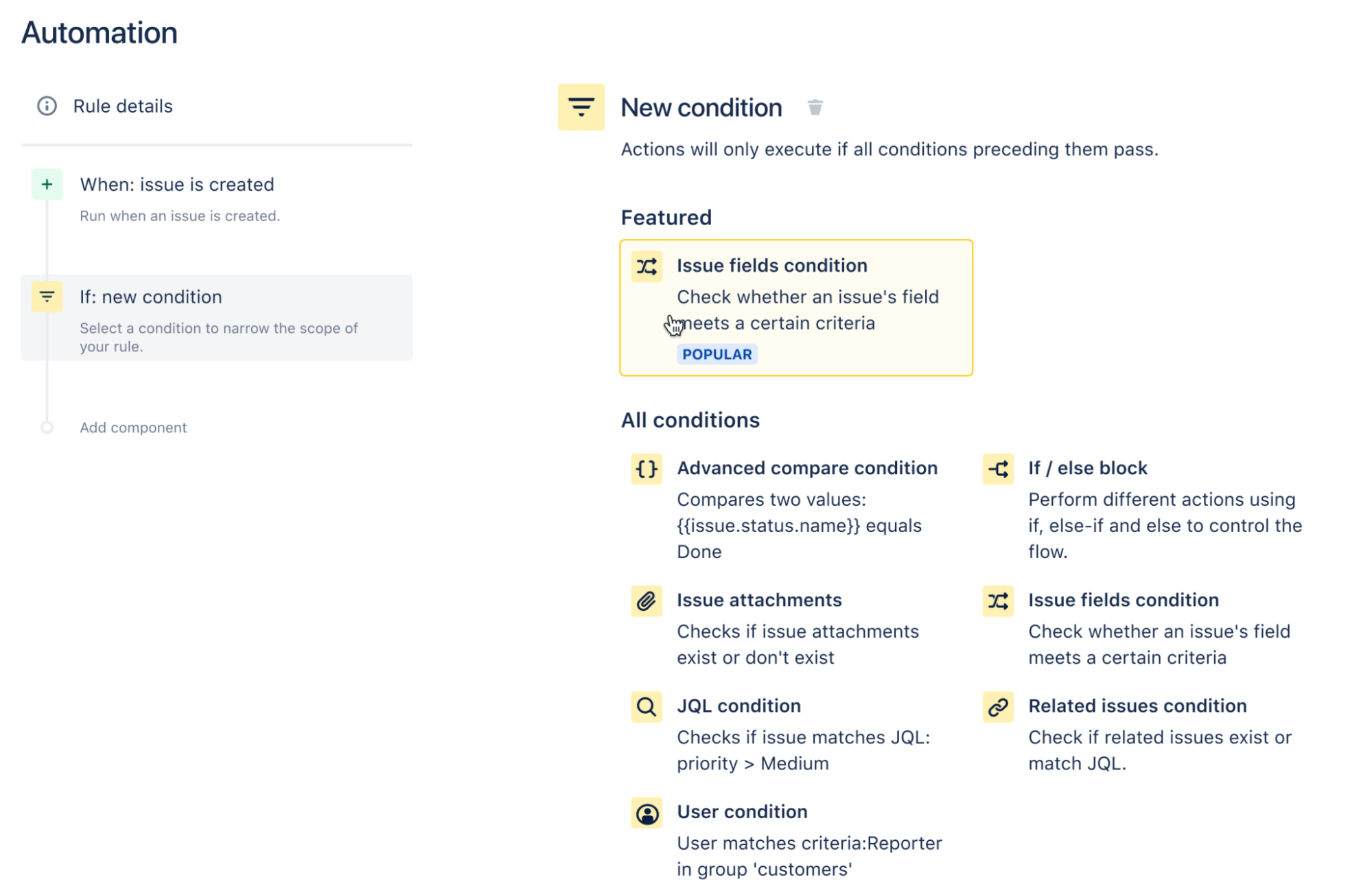 If a condition is false, its rule stop running immediately and does not perform any action.

You can create some pretty complex automation rules using conditions. For example, you can compare the values of two different fields and trigger a specific action if the values match.

You can also create if/else conditions based on which different actions are performed. 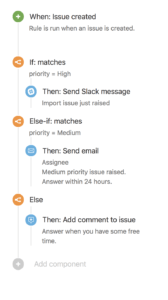 You can view the complete list of Jira’s automation conditions on this page.

Actions are the tasks that are performed when an automation rule is triggered and meets all the relevant conditions.

There are all kinds of actions you can perform as a result of an automation rule. For example, you could send an email to a specific team member when a sub-task is completed.

You can also assign issues, create new sub-tasks, clone issues from Jira integrated apps, or automatically comment on an issue.

You can view all the possible actions in Jira here.

Smart values are variables that allow you to add further complexity to your automation rules. You can use them to fetch real-time values to your fields and trigger rules.

For example, the smart value {{now.plusDays(5)}} references the current time and adds 5 days to it, while {{issue.summary}} will print off the summary of the issue.

Smart values in Jira work just like dynamic fields in email marketing. For example, you can use smart values to comment on tasks addressing the reporter’s name and issue assignee.

You can view the complete list of smart values in Jira’s documentation.

Let’s look at a few examples of how Jira automation can make your job easier as a project manager.

It’s common for software development teams to have unassigned or unattended tasks on their list. Leaving it to your engineers’ discretion to pick unattended tasks can result in confusion and miscommunication.

You can quickly resolve this by setting an automation rule in Jira. 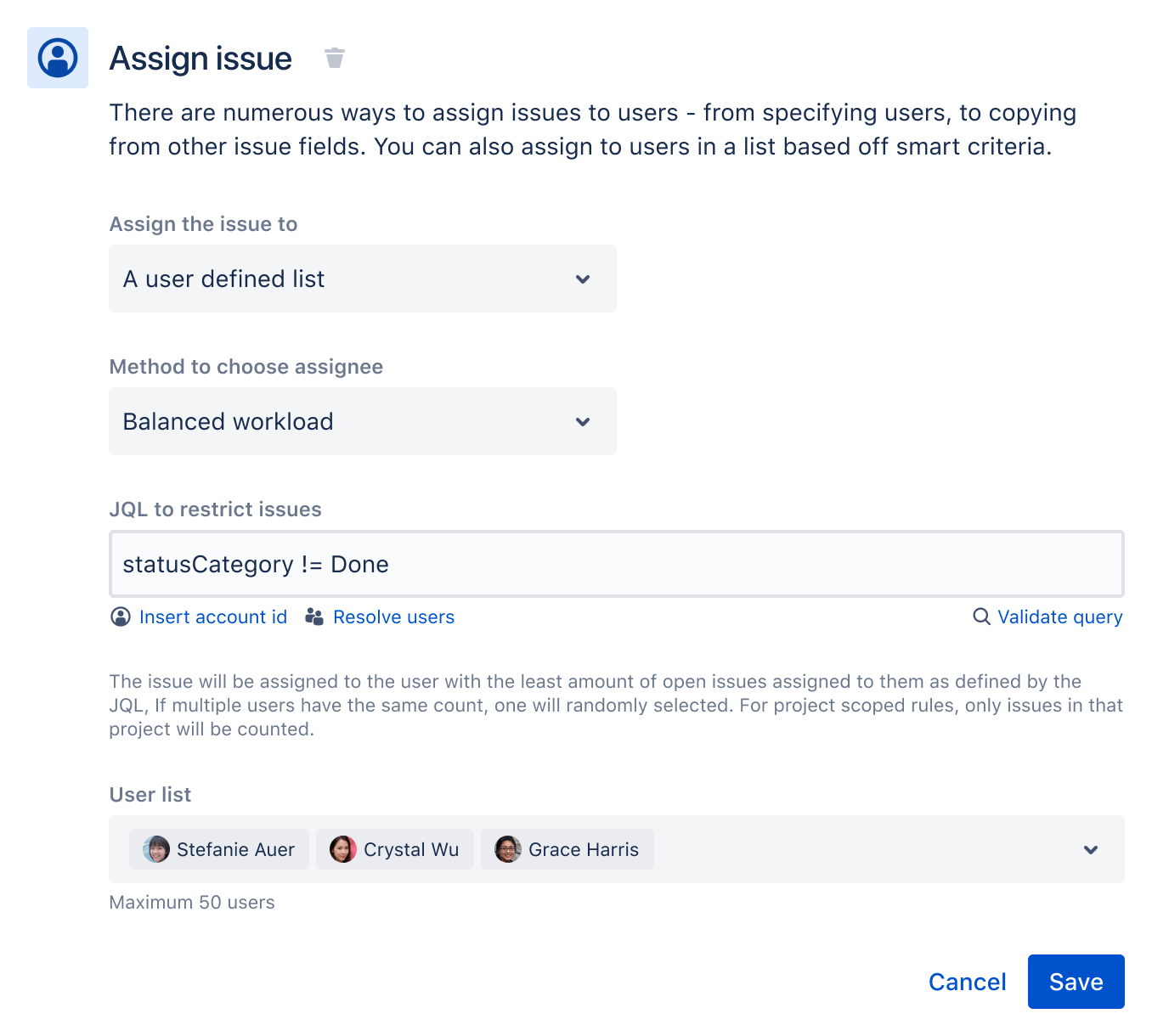 With this rule, Jira will automatically assign unattended issues to the team member with the least number of open issues.

Since this is a dynamic rule, the unassigned tasks will be assigned to a different team member every time, depending on their workload.

You can use scheduled triggers to automate many of your routine tasks like follow-ups and email communication.

For example, if a customer doesn’t respond to your query, you can send them an automated reminder and temporarily close their issue. 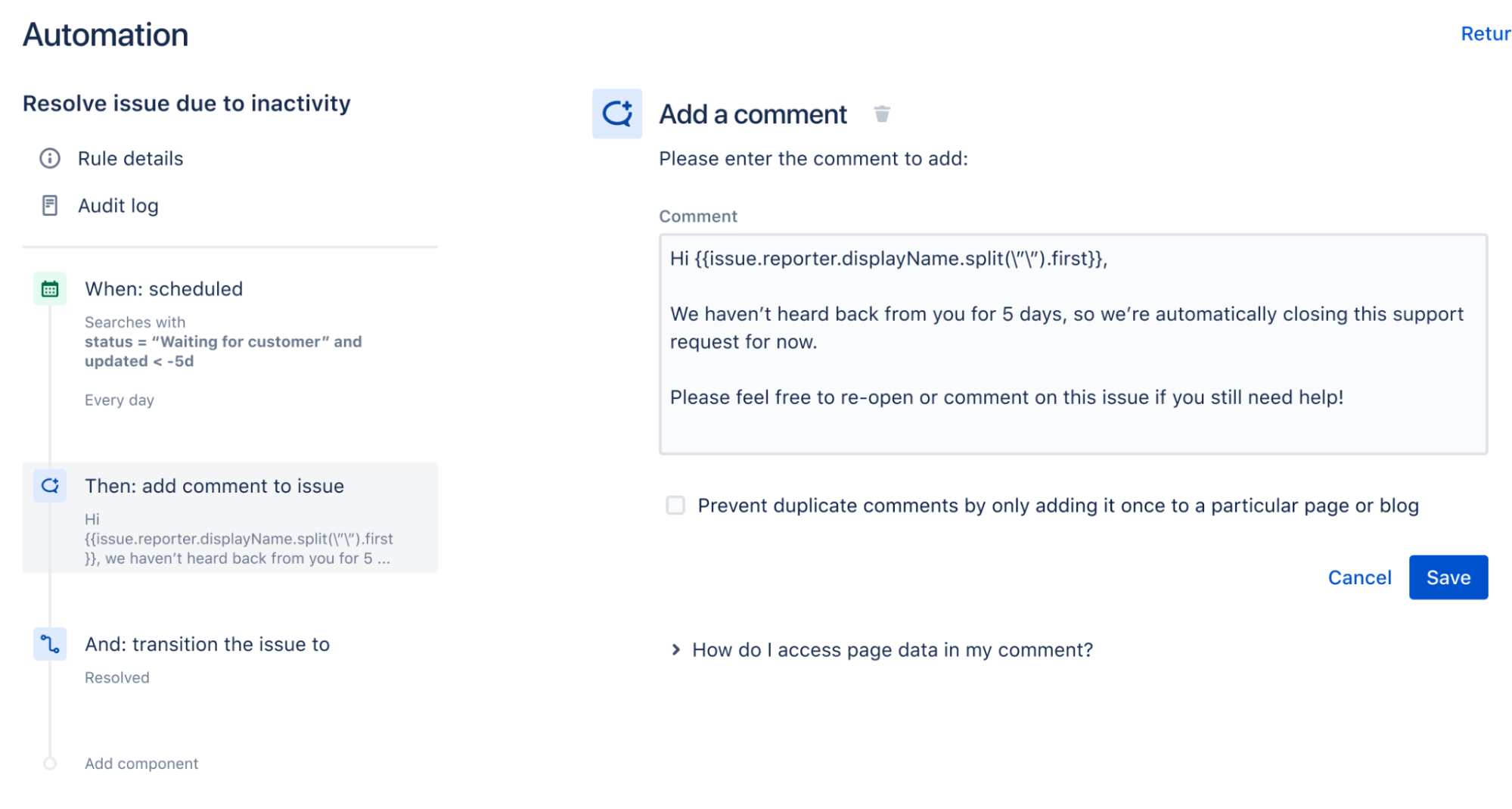 If you notice, the example in the screenshot uses smart values in the email content, which means that the client’s name will be automatically pulled from Jira’s database every time this rule is executed.

How to Get Started With Jira Automation

Now that you’ve understood the fundamentals of Jira automation, let’s dive into how to set up an automation sequence.

For this post, I’ll show you step-by-step how to add new subtasks to any new bugs and assigns them to a team member. This is one of the most popular automation rules in Jira.

To activate the rule, select Turn it on or click the toggle next to it on the Automation → All rules page.

You’ve successfully created an automation rule that will be triggered when a new bug issue is created. Jira will automatically create three sub-tasks for the issue and assign them to a specific member of your team.

You can view all your active and inactive automation rules from Automation → All rules in your Jira account. 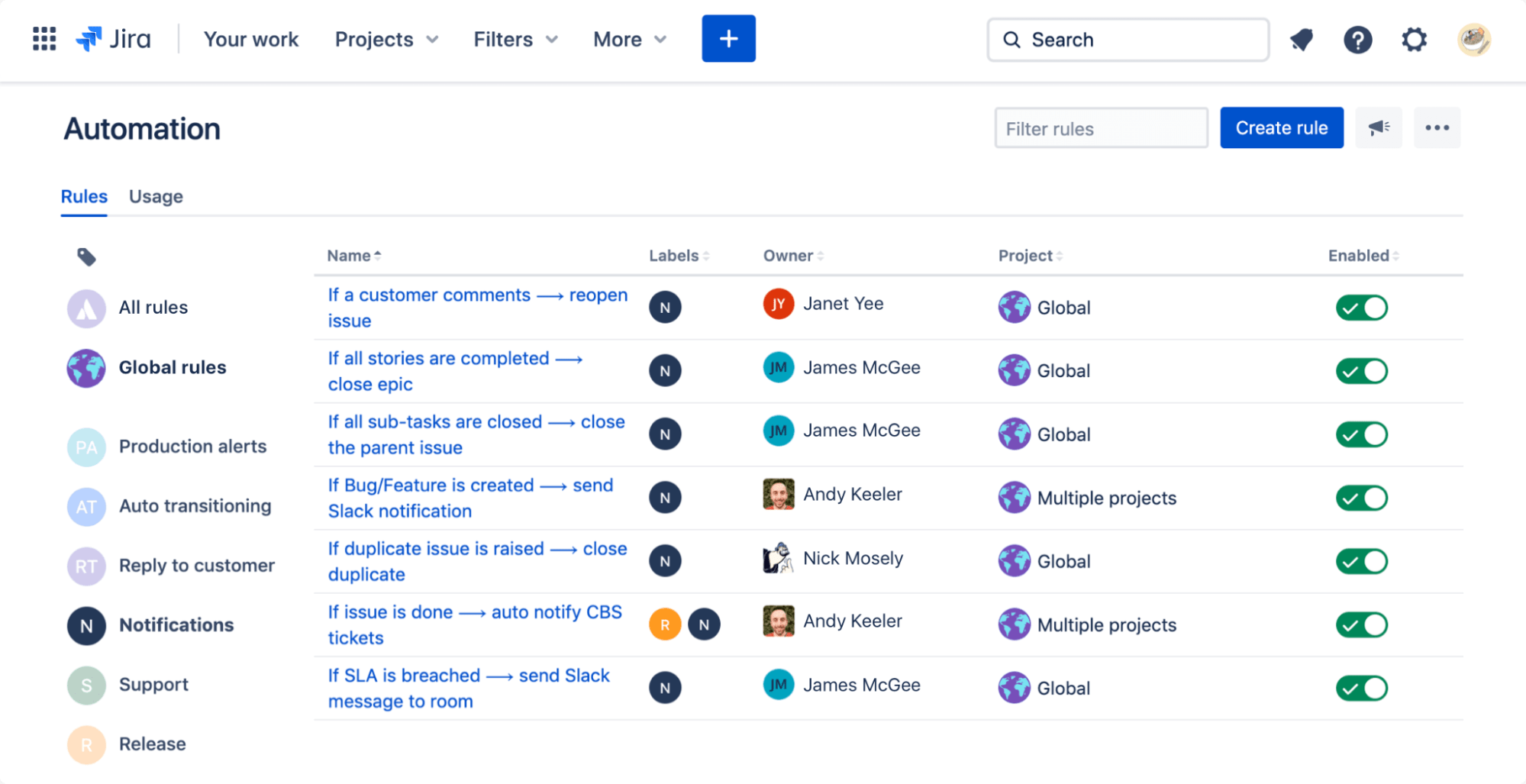 To edit an automation rule, simply click on it from the list and make the required changes.

To deactivate an automation rule, click the disable switch next to it.