Depending on your role in a particular GitLab project, you will receive certain permissions regarding taking actions for the project. These permissions settings determine the type of work you can do on the project and the types of changes you can make. We’ll help you understand the five different permissions levels that GitLab has available.

What Are GitLab Permissions Anyway? 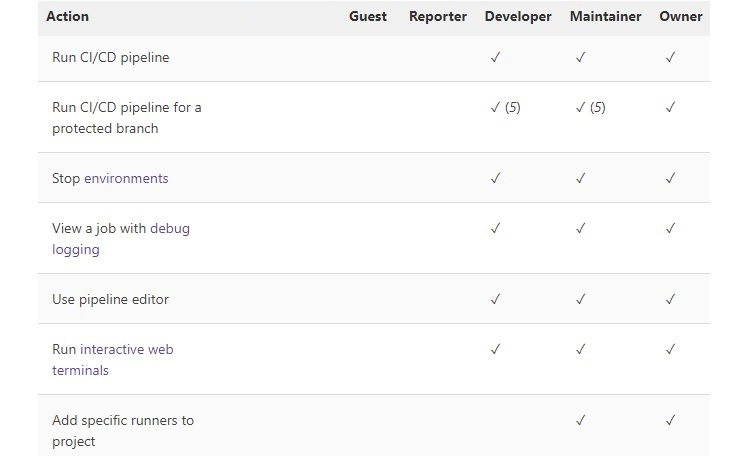 Rather than having to give each member of the group customized abilities to perform certain tasks and actions, you can assign each member a certain permission level. All of the team members who exist at that level will have the same set of permissions regarding the various actions they can take in GitLab. This greatly simplifies the management of the project’s actions.

Additionally, considering you can set permissions for more than 100 different actions through GitLab, trying to set each of those permissions one at a time would be overwhelming. By assigning each user to one of the five permission roles, you will save a significant amount of time.

Even though more than 100 actions exist for which you can set GitLab permissions, each of these permissions exists in a subgroup. Dealing with a dozen or so subgroups can make it easier to figure out which permission role to give to each member. The primary permission subgroups available include the following.

With actions related to analytics, you can see how productivity, security, deployment frequency, and lead times are occurring for either a particular project or for a group as a whole.

For actions related to application security, you can view details and statistics about any vulnerabilities regarding the project. Vulnerability scanners inside GitLab can measure your project to determine its potential vulnerability problems.

Only the Maintainer and Owner roles are able to view all actions related to the container registry. The other three permission roles have a limited ability to view such actions.

Actions for GitLab Pages deal with the ability to publish static websites directly from a GitLab repository. As long as you are using a static site generator, you can publish from GitLab Pages.

The Guest, Reporter, and Developer roles will have a limited ability to view actions regarding GitLab Pages. The Maintainer and Owner permission roles can manage all such actions.

Incident management actions allow members of a project to view any alerts related to the project. These alerts can pop up during the development of the code, which allows you to find potential problems early in the process, hopefully making them easier to fix.

Issues actions in GitLab give members the ability to collaborate on ideas and make plans about how they will tackle certain problems.

The Reporter role can view the majority of actions related to issues, while the Guest role has a limited capability. The other three permission roles have access to nearly all issues and actions.

Actions related to merge requests involve the way members are able to collaborate on proposed code changes before actually merging that code into a branch.

The Owner role is the only one with full access to actions related to Projects. The other four roles have varying access to projects, although the Developer role has access to nearly all projects’ actions.

Any repository actions in GitLab refer to the storing and editing of code, all of which receives tracking through version control.

With repository actions, the Owner and Maintainer roles have access to nearly all these actions, while the Developer has access to most of them. The Reporter and Guest roles have very limited access.

The security dashboard actions give you the ability to view any trends related to detected vulnerabilities that the security scanners find.

With the security dashboard actions, the Guest and Reporter roles have no access to them. Developer, Maintainer, and Owner roles have access to all these actions.

Next, we’ll provide greater detail about the five permission roles available to users in GitLab. 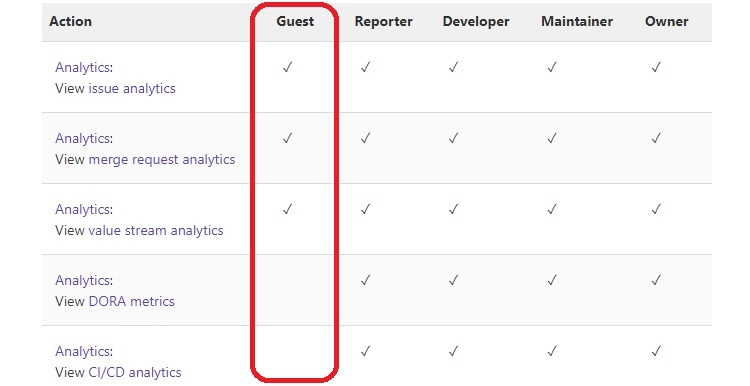 Those with the Guest permission role will have the least ability to perform changes to or to view information about the project. A Guest user can read content, can create issues, and can comment on tickets, but the Guest cannot read or write to the repository. The Guest is able to view Wiki pages related to the project as well.

When the pipelines for the project are public, the Guest permission role is able to view the list of jobs and review a log of completed jobs.

Primarily, you would grant someone a Guest role who is a non-active member of the project. 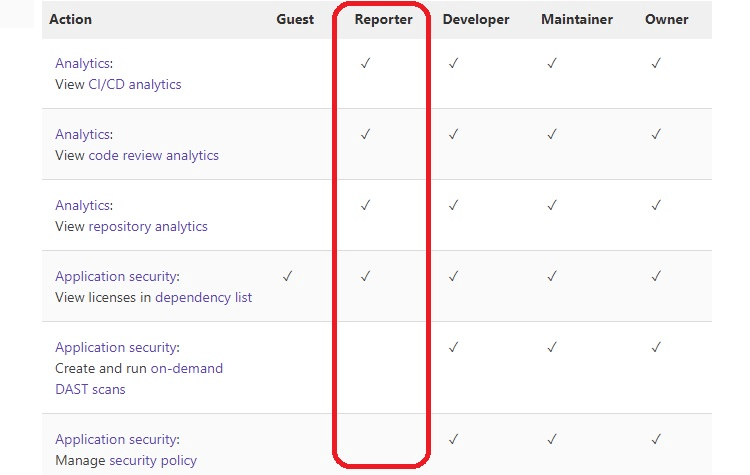 You should assign someone to the Reporter permission role if they need to obtain more insights about the project than someone with the Guest role, while also needing to track issues. 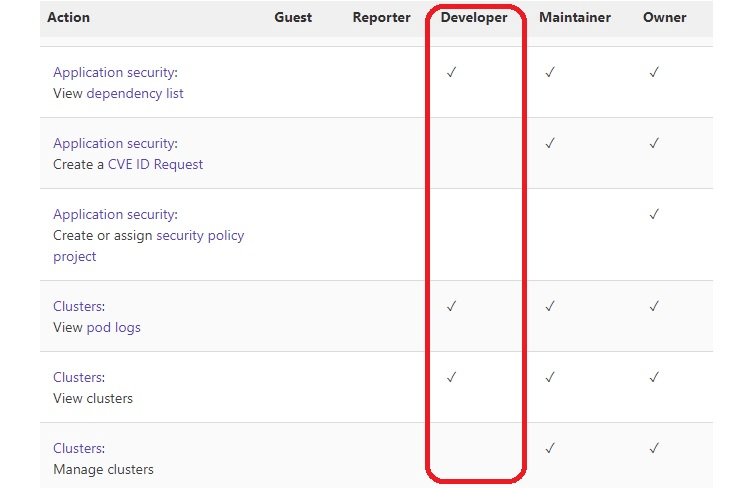 Some of the specific actions that the Developer permission role is able to take include: 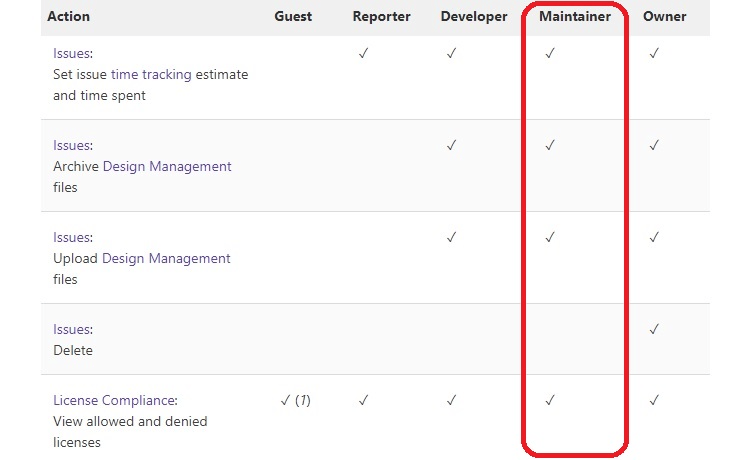 The Maintainer permission role only ranks below the Owner role in terms of the number of actions available. In the Maintainer role, the member manages the overall project, as well as managing the members of the project.

The Maintainer role can take all the actions allowed in the Developer role, as well as actions including: 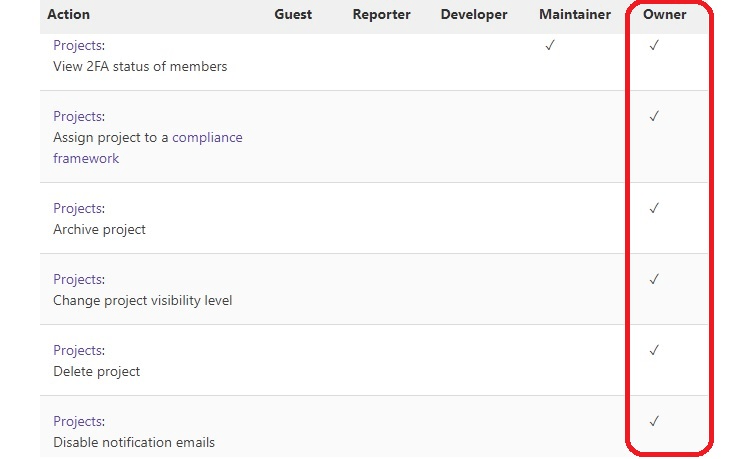 In simple terms, someone with the Owner permission role is able to control any and all actions and aspects of a project, including removing the project.

For a project that has group ownership, the project could have multiple members who hold the Owner permission role. For a personal project, only one member would have the Owner role.

Depending on the organization at which you are using GitLab, someone with the Owner permission role could be held liable for any content that is part of the project. Even if someone else created the objectionable or dangerous code and content, the member with the Owner permission role is held liable, as an Owner role should know everything about the project’s content.

How to Get Started With GitLab Permissions

You can view which permission roles the members of your project currently have by viewing the membership list on GitHub.

Before delving into the particular steps for viewing the maximum role for members of a particular project, you need to open the members list. To see the members, click Menu along the top of the GitLab window. In the drop-down menu, click Projects. From the list of projects, find the project for which you want to see the members and click on it.

Along the left side of the window, click on Project Information, followed by Members.

Find the Filter area of the list and click on Membership. Then click Inherited along the top of the window before pressing the Enter key. You then should see the list of inherited members.

When a user comes into the group because that user is a direct member of the project that is entering the group, you can adjust the maximum role of that type of inherited user. By default, this inherited member will have the lowest permission level of Guest. However, you can change the maximum role through a drop-down menu in this window.

If you just need to check the permission level for a single member of the group or project, you can do this quickly.

Find the Filter area of the list and click on Membership. With the members displayed on the screen, place the cursor in the search box at the top of the screen. Start typing the name on which you want to search and then press the Enter key. You will see all members who match your search criteria. Use the Maximum Role column toward the right side of the screen to determine the level of permission for the user.

When searching, you are able to search for members using one of three options:

If you want to see all members of a particular project who have a certain maximum role, you can do that through the sort option.

When you would like to compare permission levels for the members of the project, sorting by maximum role will be the best option. 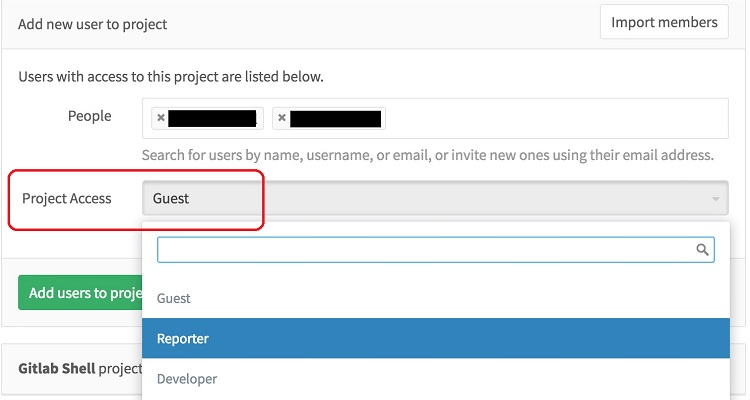 With the current list of members for the project listed on the screen, click on Invite Members. In the People text box, enter the email address of the person you want to add to the project as a member.

You can add multiple team members to this box, as long as all of them will have the same level of permission.

Then click on the Project Access drop-down menu to select a permission role for the members. (You cannot add a member with an Owner permission role directly inside the project, as you will need to do this from a group level.)

You may be able to select an expiration date for the member’s access to this project. This is an optional step. Finally, click the Add Users to Project button to make these members part of the project with the permission role that you selected for them.