Git is a distributed version control system that allows developers to track changes made to the source code during software development. Bitbucket is a web-based version control repository and a web hosting service for projects that use Git. But which one is better?

As Git is solely a distributed version control system, Bitbucket is the one we recommend as it’s also a repository hosting service for Git projects. In other words, it enables you to do more with your Git development projects in the first place and extends the functionality on offer. 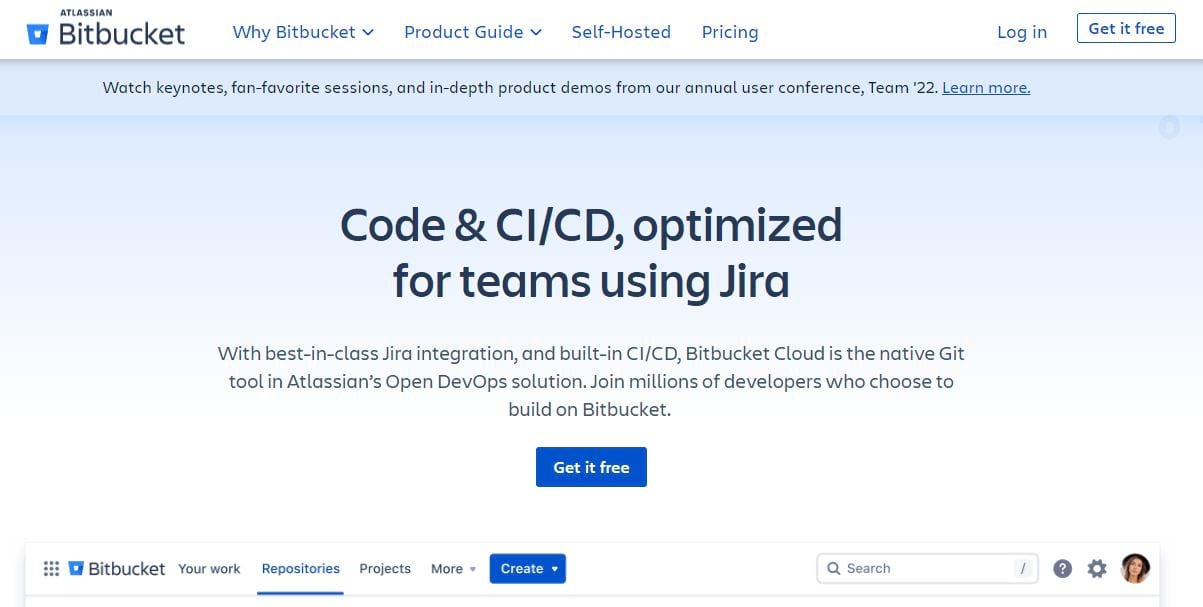 Bitbucket allows teams to collaborate and test code and provides free unlimited private repositories, robust security for peace of mind, and integrations with Trello and Jira. Best of all, it’s free to get started with and use.

When To Get Git Instead

Git is a free and open-source distributed version control system available to everyone. It’s best for those wanting to play around with code while working with local repositories. It’s effectively the software that developers will want to use before they push their projects to a remote repository. The software is great for small and large software projects and provides speed and efficiency with a firm focus on coding. 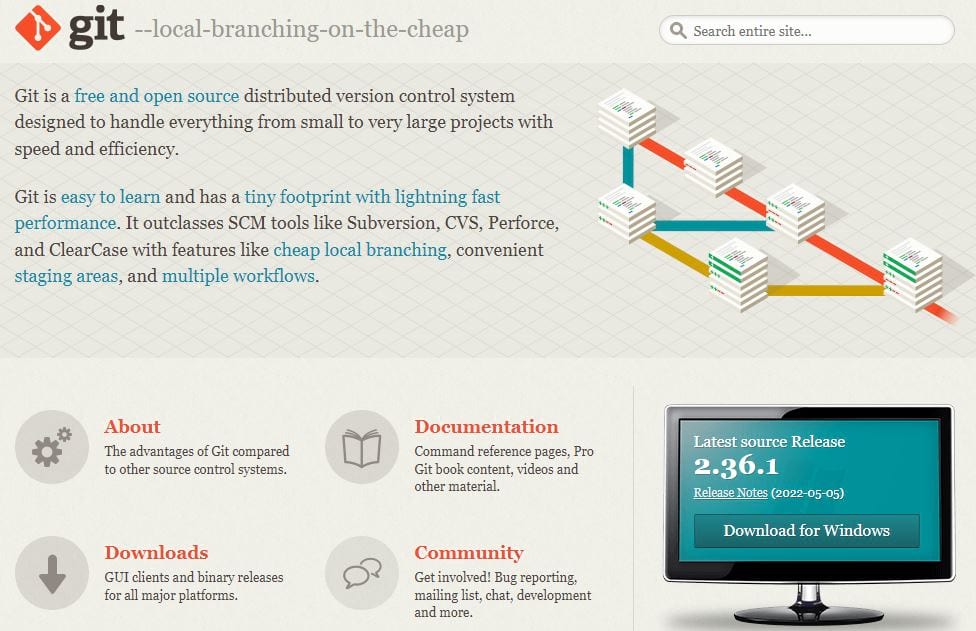 Of course, Bitbucket is a repository hosting service that provides a convenient place for a team to work on projects. It’s perfectly reasonable to expect developers to use Git first before moving onto Bitbucket later when they need more tools and added functionality. In short: Git helps with code management, while Bitbucket does that and helps with the hosting side of things with an expanded toolset.

Pricing – Is Git or Bitbucket the Better Deal?

Winner = Bitbucket
Let’s have a look at what each piece of software offers. For starters, Bitbucket is available in three tiers, Free, Standard, and Premium, as shown below: 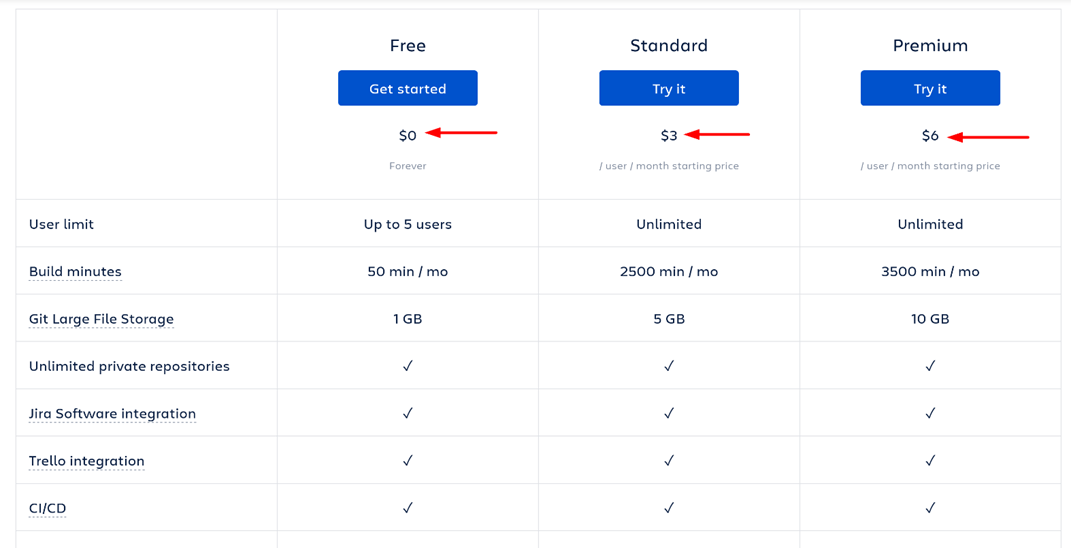 The free plan is free for up to five users but limits the number of build minutes accessible to only 50 minutes per month. Build minutes are the minutes used for executing a pipeline for testing and deploying. The free tier is a good place to start, but it’s also a plan that most users will outgrow as their projects begin to flourish.

The free tier also includes invaluable Trello and Jira integration, limitless private repositories, and 1 GB of Git Large File Storage (known as LFS). Bitbucket’s Pipelines let teams track, view, and monitor their deployments too, but you’ll only have access to 10 deployment environments on this tier, which again speaks to the plan’s limitations.

The second tier, “Standard,” gives you more and is available for an unlimited number of users. It’s $3 per user per month, and you get 2500 build minutes, 5 GB of Git Large File Storage, and up to 50 deployment environments. That’s without noting the increased support from skilled cloud teams reachable when you need them. You can also try out this plan for free for a limited time.

The final tier, “Premium,” costs $6 per user per month and offers everything from the last levels and a bit more on top: 3500 build minutes, 10 GB of Git Large File Storage, 50 deployment environments, and enforced merge checks. Enforced merge checks require that precise conditions get met on pull request merges for individual branches or branch patterns.

Bonuses on the Premium tier include two-step verification, IP allowlisting, and advanced deployment permissions. Like the Standard plan, you can try Premium out for free, but this is limited.

How does Git compare? Well, as an open-source and free version control system, you could argue it wins automatically. After all, it’s free to use throughout, and you can modify it however you want. It’s also somewhat easy to learn the basics and snappy, and you don’t have to pay for that privilege, unlike on Bitbucket’s paid tiers—there are no additional costs either. Yet things aren’t quite as simple as that.

While Git is free to use forever and doesn’t have multiple tiers with locked-out features, some unseen long-term costs of the software will eventually become a problem. For example, you’ll struggle to scale your projects using Git because the model works due to filing assets—put simply, the storage model will slow down over time, sometimes significantly, as your repositories grow.

Git doesn’t provide security either, readily allowing access to every file and folder without a suitable permissions-style feature. The model is different from a hosting service like Bitbucket. While not free to use on the later tiers, Bitbucket can secure specific branches and only allows access to them via certain groups of users. Security today isn’t something to take a chance on, so this is key.

All of this makes Git a solid choice for smaller teams at first, but as they grow along with their projects, its lack of scalability is an issue that can creep up on them by surprise, along with that fundamental lack of security. On a long-term basis, then, Git isn’t the best solution, but Bitbucket is, even with the additional costs involved on those higher tiers.

Winner = Bitbucket
Bitbucket’s interface is straightforward and clear, and you can navigate to each section as required using the sections on the left-hand side. There’s a high level of practicality, and it gets the job done without adding unnecessary features. For most software developers, that’s going to be more than enough.

Git, on the other hand, can be cluttered during use and isn’t particularly easy on the eyes:

Of course, there’s a lot you can do in Git, but navigating your way around isn’t the most user-friendly of experiences. BitBucket’s interface is modern and looks far better on current devices. There’s not really a competition between the software here.

Winner = Bitbucket
Along with the interfaces, closely related is how easy both pieces of software are to use.

Let’s start with Bitbucket. On top of that capable UI, Bitbucket is largely a pleasure to use. Whether it’s comparing branches and your history of commits or using Bitbucket Snippets to create and manage multi-file snippets, it’s fair to say that for editing code directly on the web, Bitbucket is one of the best platforms out there. That’s particularly impressive considering the problems users had with it in the past.

You’ll need to have some understanding of the various features Bitbucket offers, but it generally caters to a broad audience of software developers of multiple skill levels. You get easy, uncomplicated access to your repositories and pull requests. 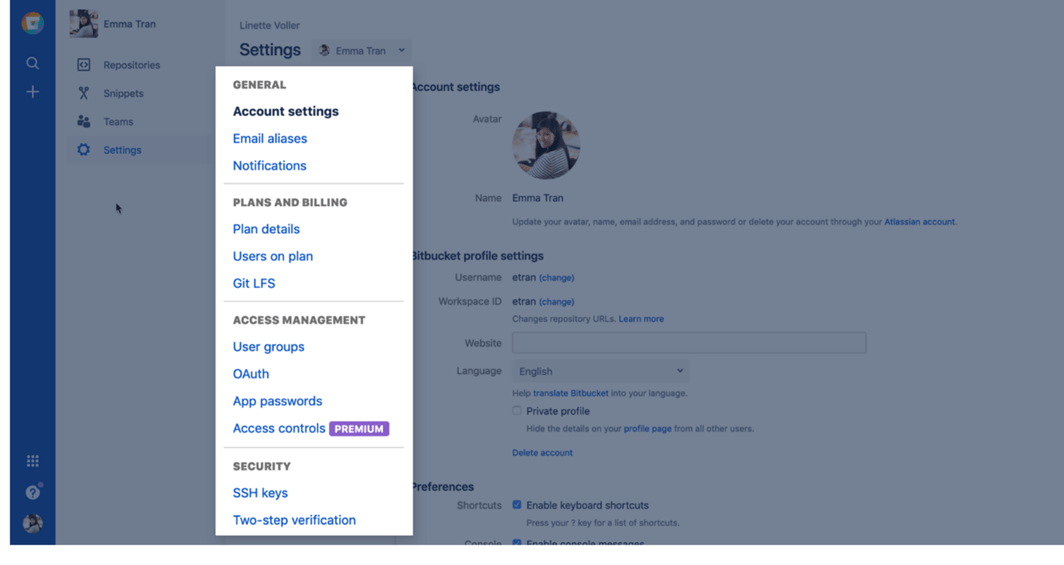 Git, on the other hand, isn’t especially easy to use, and even the most advanced developers can get lost while using it. Clearly, how easy you find the software to use will depend on your personal ability level and knowledge of programming, but developers can expect to be dropped in at the deep end, even though it’s the place most of them will probably start.

It doesn’t help that Git comes with confusing, complex documentation and an inconsistent command-line interface. There are also no built-in user management facilities, and integration is often intricate. That said, many software developers still enjoy using Git and, once they learn the ropes, find it to be extremely capable. It offers a laser-like focus on source code control, and you can delete, merge, and recall branches at the click of a button.

Winner = Bitbucket
Bitbucket’s storage limits depend on the plan you pick at the beginning. The free starting plan offers 1 GB of storage, the second 5 GB, and the final tier 10 GB. This storage is handy for teams that work with audio and video files because it helps increase the speed of your repositories. There are better storage options available on rival tools like GitHub, but what Bitbucket offers is decent enough; just be aware that the cost of storage isn’t cheap here. 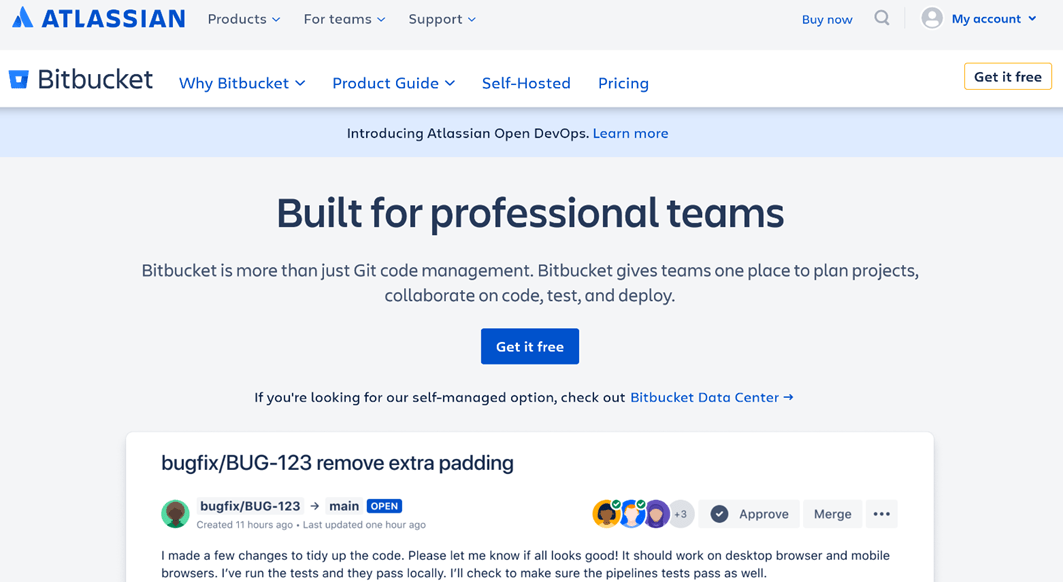 Git doesn’t have a dedicated storage model. In fact, it works by filing assets through “SHA-1” hash values. In uncomplicated terms, the more repositories grow in size, the slower Git is to use—it’s a concern for developing teams who need to manage large and evolving projects. There’s no scalability using Git, then, although this is understandable considering it launched back in 2005 and kickstarted everything off. That aside, Bitbucket will naturally be a better option for most.

Winner = Git
Bitbucket features a community section where you can ask questions and receive answers from a team of experts. You’ll be able to share a use case, discuss features, and ask for general input from other community members. All is well and good, although it isn’t the most active community on the web. What is here is beneficial enough, and developers will be pleased they can ask someone for support when they need it during a problematic coding session, just don’t expect anything more than that.

Git allows users to send general questions or comments to the Git community, which get sent via a dedicated mailing list. You’re able to report bugs to the community, as well as any security concerns you may encounter during use. There’s also a monthly community newsletter, “Git Rev News,” that offers helpful information to developers.

Other than that, you won’t find large up-to-date forums and features, which is, again, understandable considering the age of the software. That said, you’re never too far away from receiving help and support, and the community members typically have years of experience.

Winner = Bitbucket
Bitbucket offers powerful integrations with Jira, Trello, Bamboo, and many more. You’ll be able to work effectively by connecting commits and pull requests to Jira Software issues. You can monitor the status of Bamboo builds and detect issues before they become a problem, and even troubleshoot problems using Opsgenie. Even better is that Jira Software integration and Trello integration are available on the free plan out of the box.

Talking of Jira, what you receive from integrating the two tools is notable. There’s the ability to automatically update teams on code changes, see code and deployment statuses at a glance, and receive real-time development status updates within the context of an issue. Although it can be confusing for some users, the integration process is relatively straightforward once you follow the correct steps. Combining the power of these tools together will significantly benefit developers.

As for the Trello integration, you’ll be able to associate code and create Bitbucket branches from tasks from a Trello board alone. When you add a Trello board to a Bitbucket Cloud repository, your team can even see information directly within the cards. It’s yet more functionality offered through a simple integration, and Bitbucket is all the better for it. 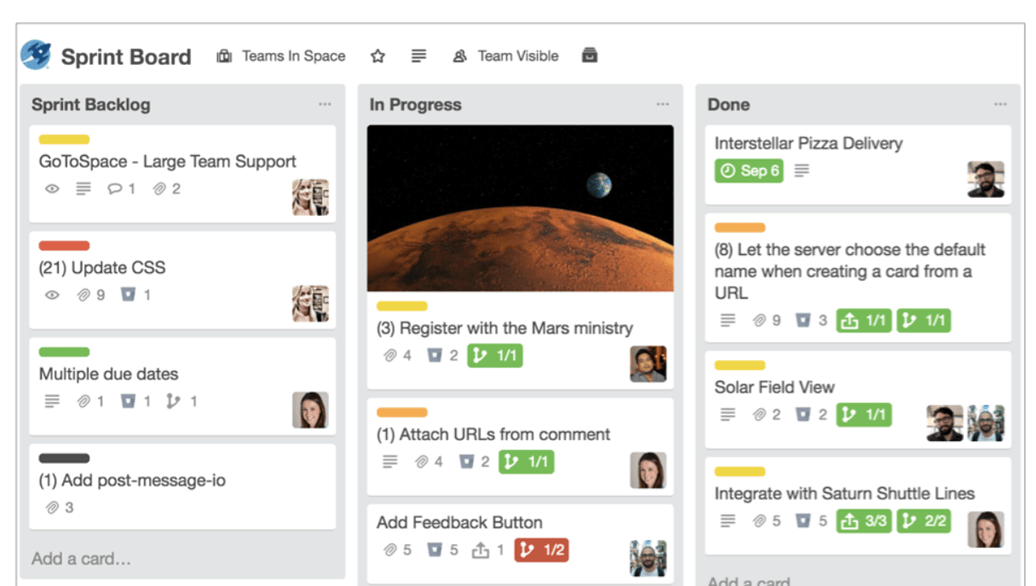 As you might imagine, Git’s integrations can’t compete, and you wouldn’t expect them to either. While integrations are possible using the software, they don’t offer the same level of functionality. For instance, Git can integrate with TestComplete, a testing platform that allows developers to create automated tests for applications. It’s a useful addition, and the built-in dialogs that help simplify various commands on files and repositories are valuable and worthwhile.

Still, Git doesn’t offer an endless number of top-notch integrations compared to a tool like Bitbucket. You can’t integrate Git with Trello or Jira, and it’s unlikely you’ll be able to in the future. Git is slight in its offerings for good reason because it allows software developers to focus on coding first and foremost.

Overall, though, both tools have their fans, and each is more than worth trying out, as long you understand the relative difference between them. For those that need a long-term modern solution, the piece of software to go for is Bitbucket. It’s ideal for growing teams because it’s easy to use, highly scalable, and offers abundant features. That said, for a strong focus on coding, speed and efficiency, and to see where it all began, Git won’t disappoint.