We decided to find out how people feel about the most popular document apps by surveying 249 people to calculate Net Promoter Score® (NPS) of 9 popular apps.

Net Promoter Score is one the best indicators of customer satisfaction. That’s because they allow you to quickly understand how people feel about a product, plus exactly why they feel the way they do.

We chose the most popular apps for our survey based on the apps people are adding to their FYI accounts. We also included apps we’ve heard about on a regular basis from our customers.

People surveyed ranged from self employed to working at 10,000+ employee companies and worked across departments, including Product, Marketing, Engineering, Sales, Design and CEOs.

“How likely are you to recommend the product to a friend?”
“What is the most important reason for your score?”

Based on the answers to the first question, we classified each person as a promoter, passive or detractor. 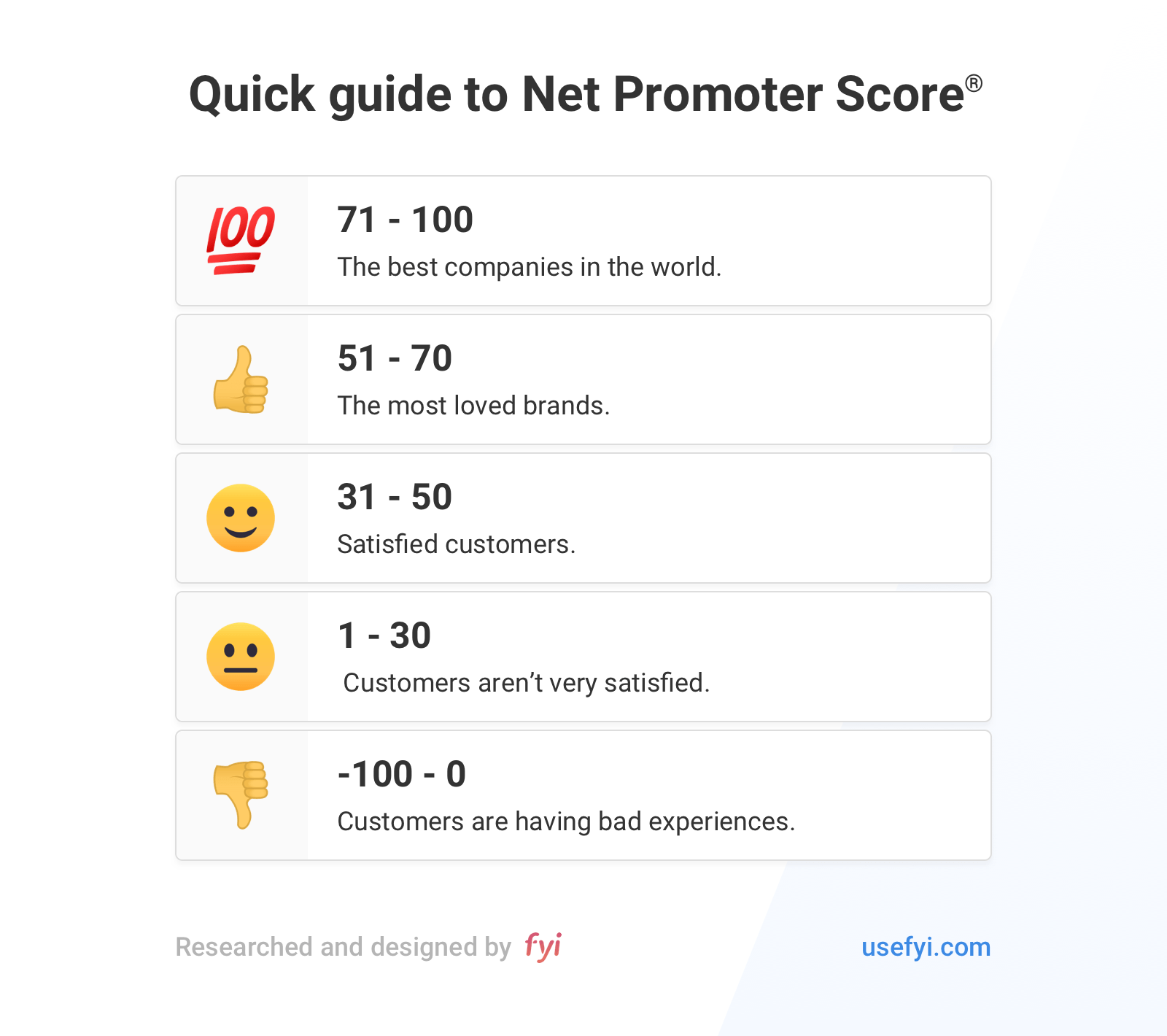 Here’s what we learned. 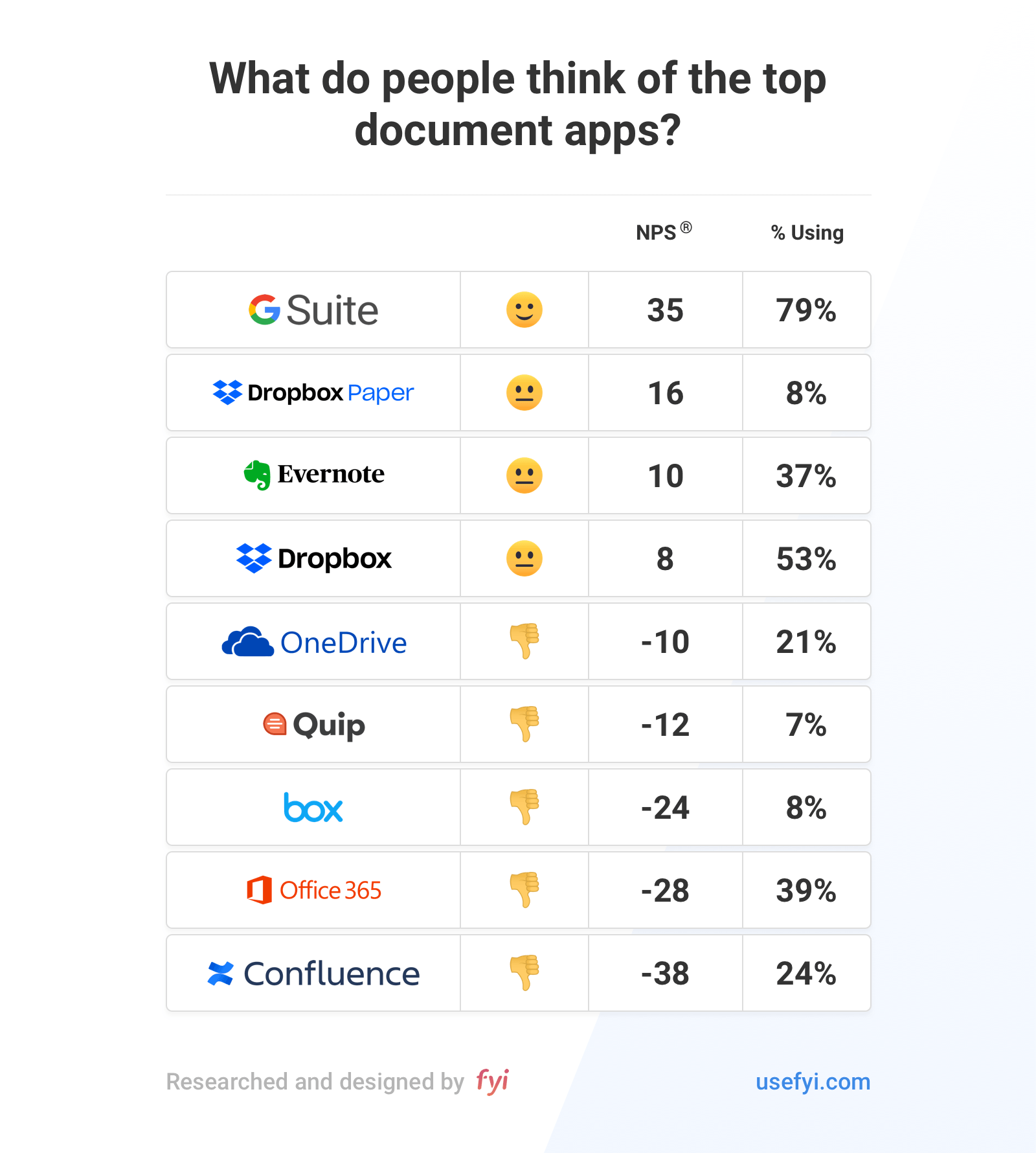 Based on the survey, customers aren’t satisfied with over half of the popular document apps! That means the majority of people surveyed who are using those products are likely having a bad experience. And they’re more likely than not telling others about their bad experiences.

Why would document apps – apps that are used on a daily basis to help people conduct business – have average to low scores?

Even heavy hitter G Suite isn’t THAT loved. And the quintessential Microsoft document app Office 365 has a low NPS. What’s going on here?

Let’s take a detailed look at the NPS of G Suite to find out.

“Everything you need in one package.”

G Suite is one of the most prolific apps, and, according to survey respondents, it’s the easiest to use.

Of the 197 survey respondents who used G Suite, 29% used the word “ease” or “easy” to describe the product. Collaboration was the second most frequently used term in responses, with 21% using the words “collaborate” or “collaboration” to describe G Suite.

G Suite is one of the market leaders in documents because it’s the easiest product to use and has market-leading collaboration to set it apart from its competitors.

Shouldn’t the NPS be higher though? The most loved brands have NPS above 50. As comparison, according to IndexNPS, Apple has a score of 72 and Tesla has a score of 96.

The largest challenge Google has is a challenge faced by all document tools.

Here’s a typical response about G Suite from our surveys:

“It’s fine. Convenient when many people use Google products.”

That’s the key to understanding the depressed NPS. Yes, G Suite is easy to use. Yes, it has amazing collaboration that sets it apart from the rest of the market. As long as the entire team is using it, it’s great.

However, it’s extremely common for companies and teams to get spread across different tools. Which makes sharing, collaborating and finding documents very challenging.

“Not everyone in the entire org uses G Suite.”
“Not very useful if you work with customers outside of Google’s ecosystem.”

Another challenge we heard from people we surveyed was that their company – and even their industry – used Microsoft Office.

“Microsoft office is entrenched in my industry.”

It’s tough to benefit from the collaboration or ease of use of G Suite if everyone else is using Microsoft Office and you have to fight to get them to collaborate with you on documents.

Remember, we’re talking about Google here. This is one of the strongest companies at usability for web services of all time. They know what they’re doing. They’ve also poured a ton of investment into improving usability recently, launching design updates to Google Docs, Sheets, Slides and Drive in May 2018. But even with all the updates and investment into usability, the top NPS of the category is still lower than it should be.

No matter how many improvements get made, there’s a ceiling on how high the NPS can go.

The problem isn’t with the apps themselves. The problem is in the workflow between document apps people are using. It’s a category problem, not an individual product problem.

Companies use multiple apps to create, store and share documents. Apps like G Suite, Dropbox, Slack, Trello, Confluence, Notion, Office 365, Box. And the list goes on and on. Our documents are everywhere. And we constantly waste time trying to find them.

Many of us have tried to fight the problem by restricting new tools and forcing entire teams into a consistent workflow. Not only does that take countless frustrating hours to accomplish, it’s ultimately futile as individuals and teams splinter away.

On top of that, new apps come out constantly. Every company has that “new tool” person that can’t resist trying them out. The problem of our documents being spread everywhere is only getting worse.

We could try to run through this brick wall.

Or we could go around it.

We believe the key to unlocking higher NPS in the document category, while solving our core problems finding and organizing documents, is to create a new type of tool entirely.

A new tool for a new category.

We call it a Document Organization Service. That’s exactly what we created with FYI.

To find all your documents in 3 clicks or less, no matter what tools your company uses, get FYI for free here.