Chrome is doing away with its ad blocking extensions soon. Some will still work but the majority will lose their ability to block ads consistently.

What’s going on, and what are your options? Which ad blockers still work?

Let’s start with the basics.

What happened to ad blocking on Chrome?

Google’s updating a key API for Chrome. The API is how a browser extension like an ad blocker communicates with the browser.

The new API, Declarative Net Request API, does’t allow chrome extensions as much freedom as the old API did. The old API was called the Web Request API.

Google insists that this will help with security and privacy. But ad blockers disagree and claim that there’s better ways to accomplish those goals without restricting ad blockers at the same time.

Can you still get ad blocking to work?

For now, all ad blocking works. Changes to Chrome can take a long time to get released and Google has not announced when the changes will go live. When they do get released, most ad blockers on Chrome will be much less effective.

The most popular ad blockers are Adblock Plus and uBlock Origin, and each will face real problems with the new API. uBlock Origin will effectively be killed off in its current incarnation since it’s entirely dependent on the Web Request API. And since it does far more than simply block visible ads, it’s likely to quickly run afoul of the new 150,000-rule limit. Adblock Plus and other simpler ad-blockers will likely stagger but survive.

With limits on the number of rules any one extension can impose on the Chrome browser, keeping ad blocking in the air post-Manifest V is going to take some juggling.

However, there are still some options.

The 3 best ad blockers that still work for Google Chrome

As we’ve said, all adblockers still work as normal until the new API goes live. When it does, which ad blockers will be left standing?

Ghostery hasn’t set out a schedule for how they’re going to deal with the new API but they are actively working on continuing to provide an ad blocking service through Chrome. When we reached out to them they told us: “this is on our radar and our team is working hard to make sure Ghostery supports any of these future changes. However, we don’t yet have the details of what exactly this will look like.”

Currently, Ghostery provides plenty of modular control over which ads and tracking you block and how. 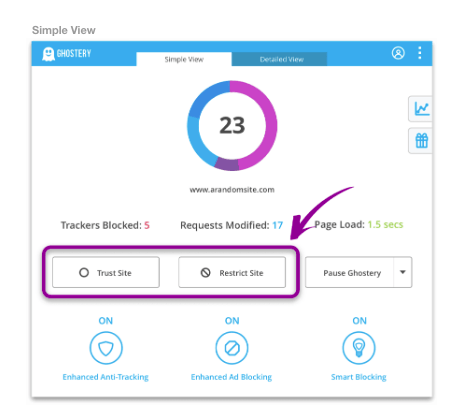 How it will marry that level of user control with a more unwieldy back-end reliant on approval from Google isn’t clear yet.

Adblock Plus is one of the most successful ad blockers in the world. Over 100 million users trust it to block ads while they surf the web and it’s Chrome’s most popular ad blocker. However, its parent company, Eyeo, lets ads through that are approved by the Acceptable Ads Committee, which used to be owned by Eyeo before it was transferred in 2017 to “interested parties from for-profit companies, industry experts and Internet users like you.”

This means Adblock Plus sits between users and advertisers, mediating the relationship rather than advocating directly for one group or the other. And its closeness with the ad industry as well as its large user base means it’s likely to be in a position to offer a similar service in the future.

If you disagree with Adblock Plus’ definition of acceptable ads, you have enough control to turn them off in the current version at least: 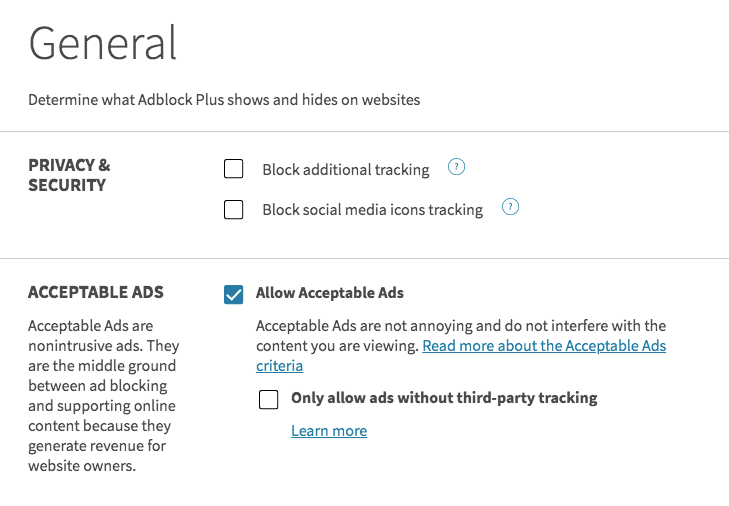 Chrome comes with its own built-in ad blocking software, designed to block all ads that don’t comply with the stipulations of the Coalition for Better Ads, one of whose founders is Google. We can say for certain that this ad blocker will continue to operate and won’t be phased out any time soon since it’s the one ad blocker that Google definitely wants you to use.

But how useful is it at blocking ads?

What the Coalition for Better Ads means by “better ads” is “data-driven ads.” Chrome’s ad blocker means you’re likely to see advertising that’s more accurately targeted to your interests but you’re not necessarily going to see fewer ads. That might suit you. If it doesn’t, Chrome Adblocker doesn’t give you many tools to change which ads you see.

For some limited options, you’ll find them under “Advanced” in the Settings of your Chrome browser. Go to Site Settings and scroll down until you see Ads.

Here you have the choice to whitelist and blacklist sites, set general ad permissions, and that’s about it: 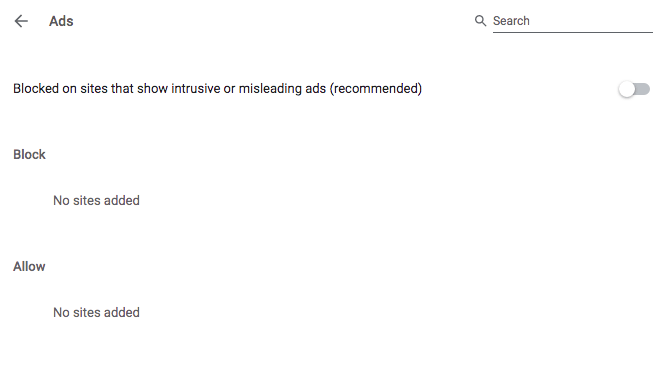 If you want to avoid ads altogether or keep the same level of ad blocking that you’re used to with a tool like uBlock Origin, the answer might be to take a drastic step and abandon Chrome altogether.

Many modern browsers are built on Chromium (the open-source codebase for Google Chrome), and some of these Chromium-based browsers responded to Google’s announcement by saying they would continue to support the Web Request API. In many cases, these browsers have better privacy but lack huge selection of extensions that Chrome has.

The best options include Opera, Vivaldi, and Brave. All of which are Chromium-based and all have publicly pledged to retain full ad-blocking functionality.

It’s also worth looking at Firefox which will allow you to port Chrome extensions across to the browser while taking privacy seriously. In fact, Firefox not only offers ad blocking built in, it has supported third-party ad blockers like mschf (not a typo) internet studios which developed Track THIS. It reverse-engineers marketing personas and then does its own browsing to create a fake browsing history and encourage ad mistargeting.

Brave browser is less familiar for users who are comfortable with Chrome’s interface even though it’s Chromium-based. And the initial download file is huge. But it delivers really solid ad blocking, built into the browser itself and with no links to the ad industry. While Chrome is moving away from facilitating ad blocking, Brave does it natively and has recently updated its method, claiming to have made the process 69 times faster.

The big difference is in how extensions are allowed to access data from the browser. Without getting too technical, Web Request used to let extensions see whatever they wanted. Ad blockers used it to monitor traffic and block ads. Other extensions sometimes used the same functionality for malicious purposes. The extension could see and handle all your browsing data and the data that was displayed on a web page, including financial information, contact details, passwords, and everything else.

Declarative Net Request keeps data like that at the browser level. It makes new rules for the browser to follow instead of stepping directly into your browsing data and it’s the browser that then implements those rules.

The problem with browser rules

These rules, third-party programming instructions for Chrome, take longer to work and are less flexible. Chrome currently has a 30,000-rule limit per extension, but in response to pressure from the developer community has proposed to extend that to 150,000 per user in total, spread across as many extensions as you like.

Critics say that new rules must be submitted to Google and aren’t implemented until Google has approved them, a process which can take weeks and which will permanently hand advertisers the upper hand in response speed. Basically, this slows ad blockers down and limits how much power they have.

How does the change fit into Chrome’s business model?

While Google has caught an increasing number of potentially insecure Chrome extensions since last year, it’s also an ad-based business. In a December, 2018 SEC filing its parent company, Alphabet Inc., noted that “changes to our data privacy practices, as well as changes to third-party advertising policies or practices may affect the type of ads and/or manner of advertising that we are able to provide which could have an adverse effect on our business.”