Box Cloud FastPath is a technology that end-users and subscribers to the Box cloud storage service may not know well. This is understandable, as FastPath works behind the scenes to help Box efficiently move vast volumes of data.

Large companies and enterprises that need to move significant numbers of files to the Box servers will appreciate the level of performance they receive with Box Cloud FastPath as part of Box Shuttle.

What Is Box Cloud FastPath Anyway?

Box Cloud FastPath serves to migrate significant amounts of data from end-users into the cloud efficiently, quickly, and cost-effectively.

Organizations that have legacy in-house storage servers are common customers for FastPath. They use this high-speed and secure data migration service to move many terabytes of data from the servers into the cloud. However, any organization that needs to migrate large amounts of data can use Box Cloud FastPath.

This software as a service (SaaS) product attempts to simplify data movement between systems that normally would not communicate easily with each other.

Think of Box Cloud FastPath as the service that allows these disparate storage systems to communicate and share data with each other. Users can transfer a number of items through Box Cloud FastPath, including:

But the two companies had a working relationship for quite a while before the acquisition. Box used Cloud FastPath technology for several years, most recently with Box Shuttle.

With the Box acquisition of Cloud FastPath, CFP users now have the option of storing their data in the cloud directly with the Box service.

Cloud FastPath was a standalone company for almost two decades before Box acquired it. It started in 2004 under the name Tervela.

In 2015, Tervela launched Cloud FastPath, which focused on migrating large amounts of data from on-premises file servers to the cloud. Tervela rebranded its company name as Cloud FastPath a few years later.

Cloud FastPath had partnerships with huge technology companies like Box, Dropbox, Google, Egnyte, and Microsoft prior to Box’s acquisition.

These large companies rely on services like Cloud FastPath to make the movement of significant amounts of data possible in a more efficient manner. Moving this type of data is not a simple process, as it can involve tens of millions or hundreds of millions of files. 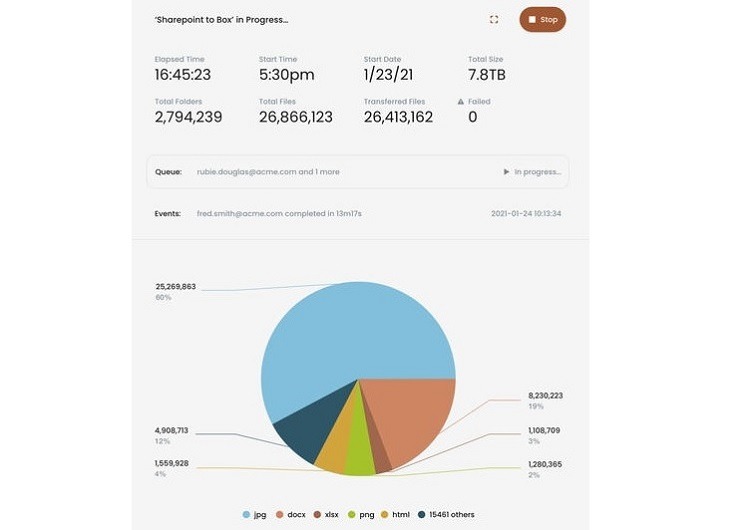 Box Cloud FastPath uses a few different technologies to handle the migration of the data.

Cloud FastPath can run an analysis of how the data migration will work, ensuring all parties understand how the process will go. The analysis helps customers create a migration plan based on actual information.

The software first ensures that the source and target are ready to handle the migration. It then starts the migration process, monitoring the progress in almost an oversight manner.

Throughout the migration action, the CFP service will create audit logs that show successful file migrations and any errors that occur. This software also will generate reports that track the overall progress of the migration.

As the data moves from the source to the target, it follows standard UDP (user datagram protocol) and TCP-IP (transmission control protocol/internet protocol) standards.

For example, Box Shuttle now provides a self-service option, where organizations can perform all aspects of the migration independently. For groups with significant security requirements, this might be the most useful option.

Additionally, some customers now will be able to use Box Shuttle’s services for free, potentially including those migrating less than 10 terabytes of data. Others will have an additional fee beyond the Box subscription pricing tier they’re already using. Customers seeking to use Box Shuttle with FastPath will need to contact Box for a price quote.

When a company seeks to move its content from legacy systems relying on data storage servers to the cloud, moving files efficiently and safely is key.

No company can afford to have hours or days of downtime where files are inaccessible during the migration to the cloud. Through Box Cloud FastPath and Box Shuttle, customers are able to move massive amounts of data efficiently and quickly. They typically can maintain access to the files from the original source as well until the migration ends.

When Intuit began using Box Shuttle to handle its data, it could retire more than 10 file servers. The financial services provider had 37 terabytes of data in more than eight million files to migrate through Box Shuttle and Cloud FastPath.

These files covered a variety of customers, including small businesses, large businesses, and individuals. When moving them, Intuit needed to ensure that all of the permissions and user data remained as part of the original files.

Intuit had a goal of providing a centralized means of giving its employees and customers access to those millions of files. As an added layer of complexity, Intuit needs to be able to onboard seasonal tax preparation employees, giving them access to the files for a few months.

Additionally, Intuit needed significant security measures deployed on each of these files, as many of them contained financial information and sensitive user data.

Box Shuttle’s ability to efficiently move huge amounts of data through Box Cloud FastPath allowed it to handle the basic parameters of the job. Box’s encryption rules worked well for Intuit, which chose to maintain independent control of its encryption keys through Box KeySafe.

Box Shuttle can move content from more than 10 different locations simultaneously. It maintains metadata information and version histories of files. Both of these features were ideal for Intuit’s needs.

When an organization expects its employees to be able to access information anywhere and at any time, having data siloed on local servers doesn’t work well.

Moving this data onto a cloud storage system simplifies access to the data. With the Box app, mobile users can access files easily on a smartphone, tablet, or laptop when they’re out of the office.

The U.S. Forest Service turned to Box Shuttle and Box Cloud FastPath to migrate more than 163 million files to the cloud. These files consisted of more than 160 terabytes of data.

The Forest Service sought to push these files into the cloud to give those working in the field the ability to easily receive important information on mobile devices. These people may include land management officers, firefighters, and campground managers.

Different departments in the Forest Service can use the centralized storage of the files in the cloud to promote improved collaboration. They can share maps or put together emergency response plans, which then are available to any employee with access to the Box cloud.

Using Box Shuttle allows organizations to put together a strategy for the cloud migration process, which was important for the U.S. Forest Service. The service needed to make sure the files maintained their governmental compliance requirements for data protection.

When a company has data archived on local servers, it is sometimes difficult to give employees access to it. Depending on the company’s search parameters on its archived servers, some of these files may not show up when employees look for them. Additionally, some archived servers may be in a silo, preventing access for some employees.

By migrating all currently used files and archived files to the cloud, employees can use Box’s search tools to find just the file they need.

Coalfire turned to Box Cloud FastPath and Box Shuttle to give its employees access to the company’s archived files. Cloud FastPath moved these files quickly and securely.

Coalfire ensures secure data storage for its customers while helping them avoid cybersecurity issues. The decision to use Box gave Coalfire the ability to apply compliance and security parameters to all of the files in motion.

In addition, Coalfire had an extra layer of complexity to its situation. Coalfire stored its content on several thousand Microsoft SharePoint platforms. SharePoint serves as a document management and storage system.

Through Cloud FastPath, Coalfire was able to store all of the data in the Box cloud, simplifying the process of finding files for all employees. By centralizing the files through Box, employees at Coalfire gained the ability to track down files with Box, rather than going through individual SharePoint sites.

With its use of Box Shuttle and Box Cloud FastPath, Coalfire also decided to deploy Box KeySafe and Box Governance for additional security and compliance assurances.

How to Get Started With Box Cloud FastPath

To start using Box Cloud FastPath and Box Shuttle, organizations can make use of the following steps.

Box recommends using Cloud FastPath only when the amount of data will be quite large, usually more than one terabyte.

Additionally, Box recommends Box Shuttle and Cloud FastPath when the organization has more than 100,000 files to migrate.

With fewer files to migrate or with a smaller amount of data, Box recommends using Box’s synchronization feature, drag-and-drop techniques through the Box app or web version, or using an FTP site.

Certainly, organizations with less than one terabyte of data or 100,000 files can use Box Shuttle and Cloud FastPath. However, Cloud FastPath’s maximum efficiency occurs with larger amounts of data.

Step 2: Setting the Parameters of the Migration

Once an organization decides to use Cloud FastPath, it will need to take a few steps to set up the migration process.

Box requires filenames that do not use certain characters for the migrated files. These banned filename characters include:

Before starting the migration, the organization must remove these characters from all filenames.

Additionally, folders should have fewer than 10,000 files to receive the highest possible level of performance during migration. (Folders can have up to 15,000 files without creating an error during the migration, though.) No folder name should have more than 100 characters. The organization should fix any issues like this before starting the process. 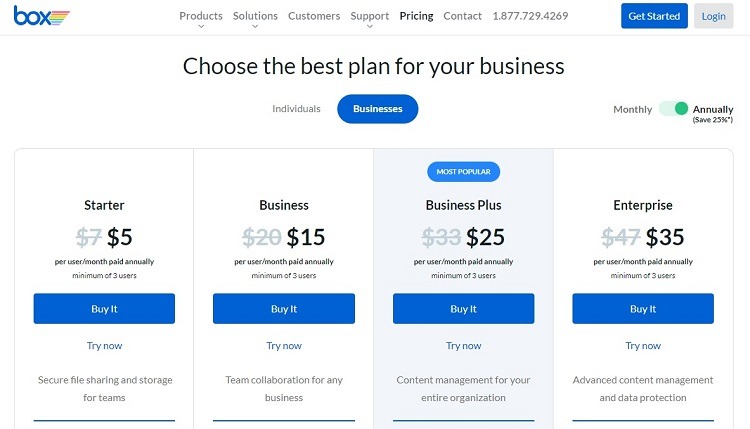 Additionally, those using Box Cloud FastPath will have to adhere to any limitations for file size and total data specified in the organization’s pricing tier. Box pricing tiers include:

After determining the parameters for migrating the data, organizations can choose whether they want to manage the migration on their own through Box Cloud FastPath, Box Shuttle, or both Box also offers a service called Box Consulting to aid in the migration process.

Additionally, Box Consulting focuses on making plans to minimize any user disruptions during the migration process.

The time required for the Box Cloud FastPath and Box Shuttle migration process can vary from a few days to several months. The migration speed depends on the number of files involved and any limitations the organization has. For example, if files can only move at certain hours of the day, this will slow the process.

During and after the migration, Box will keep organizations updated with the progress through various reports.