A code repository is where bits of source code for software programs get archived systematically—the repository serves as a file archive and a web hosting facility at the same time. Bitbucket and GitHub are two of the most well-known code repositories on the market, but which is better?

Both Bitbucket and GitHub are more than solid options, but Bitbucket is the better choice for most.

While GitHub has many notable features, and the tools are neck and neck in several areas, Bitbucket is more flexible, has fairer pricing, offers powerful Jira integration, and is just easier to get on with and use. Bitbucket also has advanced semantic searching, which speeds up your searches.

When To Get GitHub Instead

Bitbucket pretty much offers more for less, and that’s hard to beat, but that doesn’t mean you should dismiss GitHub. For software developers, having examples of your coding on GitHub are what blog posts are to writers and their portfolios—it’s the start of many developers’ career as they grow and improve.

Naturally then, GitHub offers great wiki support that allows you to document and share projects with teammates and centers far more on collaboration between developers, with highlighted code comments and code reviews. What’s more, milestones, labels, and a built-in issue tracker for projects all add up to make GitHub better suited for those that need to track their progress.

Pricing – Is Bitbucket or GitHub the Better Deal?

Bitbucket is available in three main tiers, Free, Standard, and Premium, like so:

The free plan is free for up to five users, but it comes with a tight restriction on the number of build minutes—50 minutes per month. Build minutes are the minutes used for executing a pipeline for building, testing, and deploying code. In other words: it’s a good starting plan to test out the platform, but long-term users will find it challenging to remain on the tier forever due to the limitations.

The free tier includes Trello and Jira integration, unlimited private repositories, and 1 GB of Git Large File Storage (LFS). Bitbucket’s Pipelines that let teams track, view, and monitor their deployments is available too, but you’ll only have access to 10 deployment environments on this tier, so keep that in mind.

The second tier, Standard, gives you more to play with and is available for an unlimited number of users, although that doesn’t, of course, mean each user is free. It’s $3 per user per month, but for that, you get 2500 build minutes a month, 5 GB of Git Large File Storage, and up to 50 deployment environments. That’s without mentioning the increased support with highly-trained cloud teams available when you need them. You can also try out this plan for free.

Bonuses on the final tier include two-step verification, IP allowlisting, and advanced deployment permissions. Like the previous plan, you can try Premium out for free for a limited period.

All in all, it’s a robust set of plans, but what about GitHub? Well, it offers three tiers too, as shown below:

There are Free, Team, and Enterprise variants. The free plan remains free, but once again, it comes with the caveat of restrictions. That said, you’ll get unlimited public and private repositories, 2000 automation minutes per month, which are free for public repositories, and 500 MB of Packages storage, which are also free for public repositories. On top of that, there’s community support available and code reviews from the get-go.

The second tier, Team, costs $4 per user per month and includes everything on the initial level, plus 3000 automation minutes per month, 2 GB of Packages storage, and dedicated web-based support. There are also pages and wikis—for easy editing and collaboration—and multiple reviewers can review pull requests. Unlike Bitbucket’s middle tier, you can’t try this plan for free.

The final tier is Enterprise. There’s quite a jump up in price, as you might expect, costing $21 per user per month. What you get for that price increase includes everything from Team, as well as automatic security and version updates, a vast 50,000 automation minutes per month, and 50 GB of Packages storage. There’s also premium web and phone support, SAML single sign-on, and advanced auditing. A free trial for this plan is also available.

As you can see, both Bitbucket and GitHub have a lot to offer, and this isn’t a case of one charging ahead of the other. However, we think the value on offer with Bitbucket speaks for itself, and you’re getting similar functionality for less. BitBucket is highly competitive with its prices, although it’s worth mentioning that GitHub has been decreasing some of its prices to catch up. As it stands, though, Bitbucket comfortably “wins” here.

There are a variety of useful applications and integrations that extend the functionality of both tools, including project management apps and issue tracking add-ons. The reality is both Bitbucket and GitHub come with a glut of extensions and third-party integrations so that you won’t be short for choice. That said, this is an area where Bitbucket moves a little bit further ahead.

That’s primarily because of the Atlassian Marketplace, which allows you to supercharge Bitbucket with over 2000 different apps and other integrations. It’s fair to say there’s almost everything you could ever need here, from custom security audits to improving your DevOps workflow with automation.

GitHub does have a marketplace of its own, and there are plenty of valuable apps to be found there. In fact, there are over 90 integrations available, most of which are exclusive to GitHub users—from continuous integration to project management and code review, you won’t feel left out, even if Bitbucket has the edge.

Each tool’s wikis function is worth discussing because they are incredibly useful for software developers, allowing for deep collaboration and promoting teamwork. Yet there’s a key difference between the two tools: on Bitbucket, you can set a wiki for each of your repositories, both public and private, but on GitHub, you can’t. 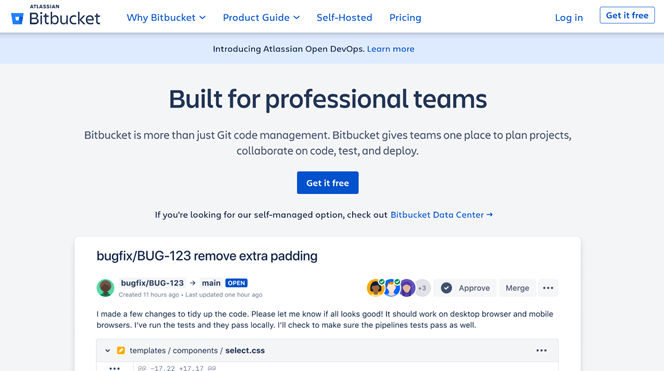 Essentially, free private repositories on GitHub cannot have their own wikis, and only the free public repositories do. For some, this is a bit of a dealbreaker, certainly for those who want and need to collaborate as much as possible.

That said, GitHub exclusively offers a “Projects” tab where Trello-like functionality is available for each project. It’s handy, yet Bitbucket counters this apparent advantage by simply allowing you to link a Bitbucket repository directly to Trello. Both tools are closely matched then, but Bitbucket creeps ahead with better overall wiki functionality.

GitHub naturally has more to offer on the community side of things because it’s the single largest host for public code. Bitbucket is aimed more at larger businesses and enterprises, and as such, private repositories are typically the aim of the day there instead.

The support from the open-source community on GitHub is expansive and continually growing. If you want to reach developers or get stuck and need help, there’s no doubt GitHub is a quicker and more comprehensive solution. Bitbucket does provide online support, though, as well as tutorials, webinars, and documentation, so you aren’t entirely left in the dark.

It’s another reason why GitHub is perhaps a better starting place for developers; Bitbucket is where they go afterward once they have experience and can operate without the extra support.

GitHub also offers documentation and essential ticket support, but the community-led effort should be enough for most software developers. Before jumping in with either tool, it’s best to think about what stage you’re at and what level of support is required. Of course, developers of all skill levels will use both tools, but you’re in safe hands with the GitHub community.

How important the user interface (UI) is for you will vary—what may be easy to navigate for some might be a challenge for others. That aside, the two UIs are broadly similar here, although we think Bitbucket is a slightly better option if ease of use is high on your priorities.

Bitbucket is notably clean and organized in its approach, and it couldn’t be easier to move around or find what you’re looking for with the tool. The sidebar navigation, which is clearly presented, enables you to jump to any section you need with a single click. The whole UI is minimalistic, to say the least, and while some may not like that, there’s just a higher level of accessibility on offer here.

GitHub, on the other hand, offers a notably cluttered and complex UI. Jumping through the menus could leave some users confused, and it’s not a particularly slick UI in general. That said, GitHub does connect with a range of powerful features from a single location, and you can get a lot done using it.

We still think Bitbucket’s clean interface is the way to go, though, and will be the preferred option for most developers.

Both tools have plenty to offer when it comes to extra features and added functionality, and again, this isn’t a case of one leaping ahead of the other. Let’s start with some of the additional functionality in GitHub.

GitHub provides a helpful feature in the form of the issue tracker that can detect problems inside the codebase and alert all collaborators when something goes wrong. Hopefully, this is something most users won’t need to use frequently, yet it provides reassurance that things will stay on track, and best of all, you’ll know about it in advance.

There’s also enhanced functionality through the issue boards that support Kanban and scrum, and developers can estimate effort points for each issue and share details with collaborators. The support of over 200 programming languages is welcome, too, as is the syntax highlighting, a feature not found on BitBucket, making searches flat out easier.

GitHub offers dedicated desktop applications for Windows and Mac, as well as a complete mobile app for Android. Add in roadmaps that help you plan team projects and locate critical milestones, and you’ve got a complete package that’s upgradable further at the marketplace.

On the other side of things, Bitbucket’s “Pipelines” is a service that can display your entire development life cycle and allows developers to track deployment progress whenever they want. Developers can also quickly enable specific people to access a repository in a few clicks, and there’s even a search panel for codebase navigation.

On top of that, Bitbucket offers Mac and Windows clients and its own Android app named Bitbeaker. Further integrations with Slack and HipChat, as well as the effective Jira integration, result in fluid workflows that help the tool to feel more professional and, in some ways, more premium, despite the generally lower prices you’ll have to pay.

The Jira functionality is a benefit that’s hard to overlook, mainly as it saves time and allows users to see their repository files with nothing else needed. Bitbucket feels like a perfect partner with Jira then, and the reporting and communication features are top-notch. Put simply: the integration with Jira is a killer feature that brings insight and simplicity to the package.

In summary, both tools have a wealth of extra functionality, and whichever you opt for, you’re unlikely to be disappointed. With that said, Bitbucket offers more helpful features that developers will undoubtedly relish.