The command line interface (CLI) offers a central place to interact and manage your Git version control system. Admittedly, the command line can be challenging to master, especially for beginners. However, even seasoned developers can admit to being slowed down by repetitive and complex commands.

That’s where the graphical user interface (GUI) comes in. These clients offer a visual alternative to your command line. Here, you can visualize repository activity, command history, branches, changes to branches, and much more.

The GUI also eliminates the need to write commands in a terminal to perform actions. Instead, you simply click buttons to achieve the same actions as the command line. The GUI also presents possibilities that some developers didn’t even know existed in Git.

It is easy to see why GUI clients are popular among novice and seasoned developers. With this in mind, below are the best Git GUI clients to consider for your projects.

SmartGit is a top choice if you’re looking for a multi-platform Git GUI client. The platform supports Windows, Linux, and macOS and features an intuitive interface despite your chosen platform. It’s also one of the easiest Git clients to master, making it a good choice for people new to Git.

It has many easy-to-use features, so you’ll only need to use manual commands sparingly. For instance, you can configure your repository branches, automatically resolve merge conflicts, and compare, edit, and merge files side-by-side without touching the command line.

SmartGit also easily integrates with the major Git hosting platforms, including GitHub, GitLab, Bitbucket, and Azure DevOps. Some of the other SmartGit notable features include:

SmartGit plans start at $5.90 per month or $59 per year.  Alternatively, you can purchase a lifetime license for a one-time fee of $285. You can use one license for up to three machines. 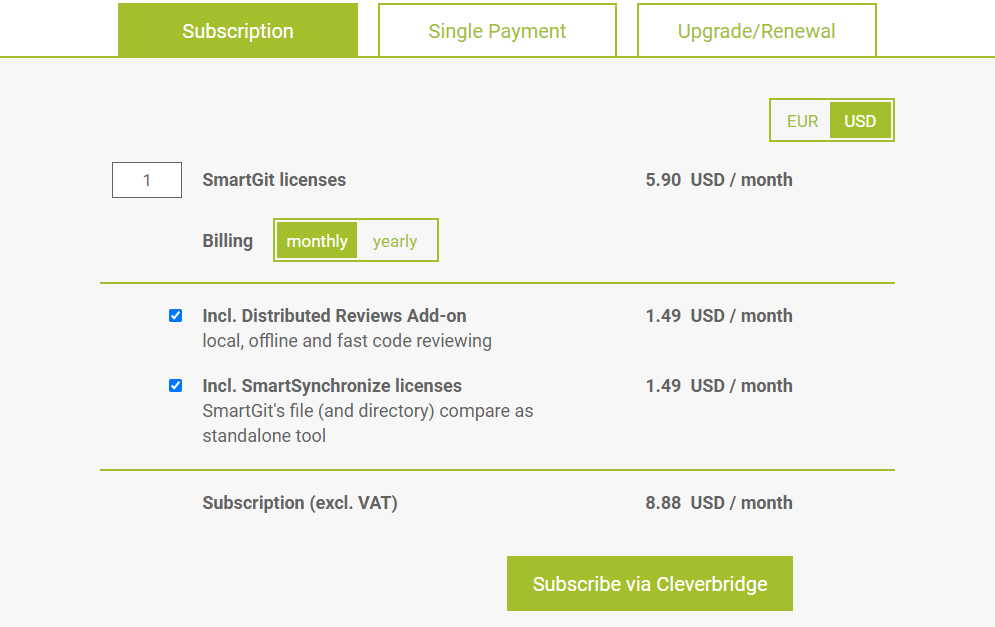 On the downside, while SmartGit is generally easy to use, it has a significant learning curve. In addition, the client offers multiple complex features which may take some time to get accustomed to. Otherwise, SmartGit is a terrific cross-platform GUI client that offers consistent UI across all your platforms.

GitForce is an exemplary GUI client if you’re looking for a free tool. It’s easy for beginners and reduces the need to use the command line. In addition, it lets you perform the most common Git functions, including creating Git repositories and branches, accessing your Git history, and scanning local repositories. 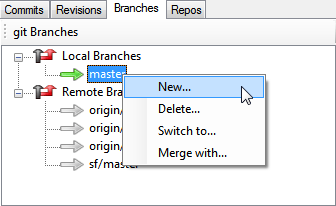 Additionally, GitForce supports Windows and Linux. It has an intuitive user interface and is easy for beginners to master. Again, GitForce is free to use, and you don’t have to download the software. Instead, you copy the single file on your computer and execute it to start using the client.

Other notable GitForce features include:

There isn’t much else to say about GitForce except that it is a free tool that allows you to perform basic Git tasks without using your command line. However, you may need a more robust client to perform more elaborate command line functions.

SourceTree is a surprisingly robust free Git client. It works almost as well as paid clients and is an excellent alternative to GitForce if you prefer free GUI clients. In addition, SourceTree’s ease of use and intuitive interface makes it an ideal choice for beginner coders.

Right off the bat, SourceTree offers simple visibility to your branches or commits in a single click. However, you can also perform more complex actions, such as cherry-picking between branches and reviewing changesets and stash. 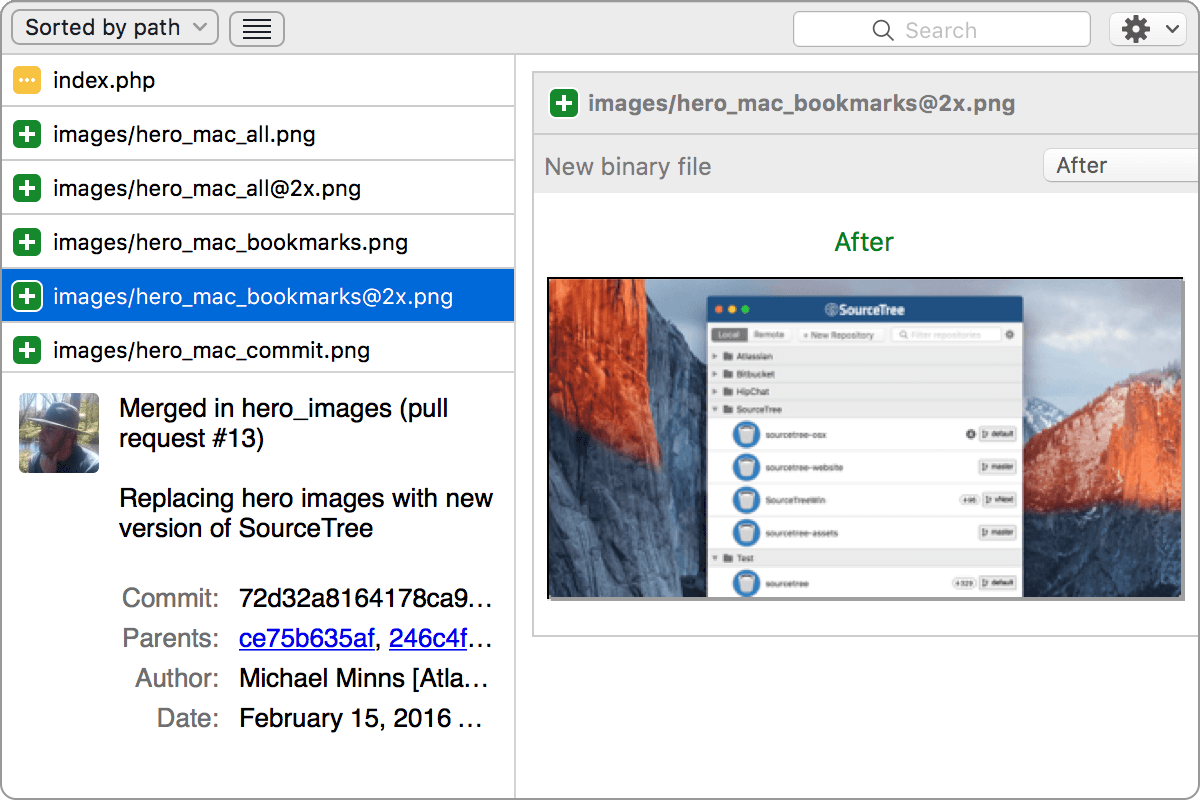 Moreover, the GUI platform is packed with useful features to simplify your workflow without the help of a command line. For instance, you can view detailed branching diagrams, work with large Git files, clone remote repositories, and search local file changes from within SourceTree.

Finally, SourceTree supports Windows and Mac. In addition, it’s an Atlassian product, meaning that it integrates seamlessly with GitHub and BitBucket.

On the downside, SourceTree doesn’t currently support Linux. So you’ll need to find a different client if you’re on Linux. Otherwise, SourceTree is a terrific enterprise-grade Git GUI that’s completely free to use.

GitHub Desktop is another capable and robust Git GUI. It comes highly recommended if you already host your code on GitHub, as the interface, terminology, and functionality will be very familiar. 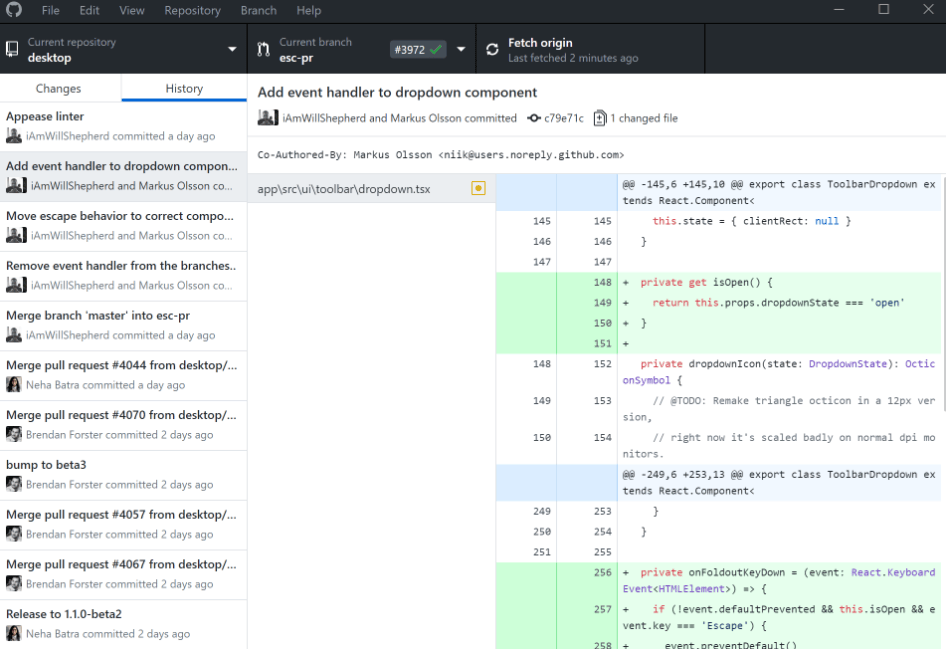 GitHub Desktop supports Windows and Mac. It’s free to use, and you can access the client from your GitHub account. Its noteworthy features include:

The client is also straightforward to use, so beginners feel at home. It also supports more complex functions, such as when working with multiple coding languages.

However, the GUI’s primary advantage is also its Achilles heel. The tool is purpose-built for GitHub, rendering it unusable for alternative Git-hosting platforms like GitLab. GitHub desktop also doesn’t support Linux OS.

Regardless, GitHub Desktop is a helpful graphical interface for teams already working on GitHub. It’s also surprisingly robust for a free program.

GitKraken is another cross-platform GUI that supports Windows, Mac, and Linux systems. It features a modern, beautiful, intuitive interface with built-in themes and features. It also supports the major version control systems (VCS), including GitHub, GitLab, and Bitbucket.

Some of the GUI’s most attractive features include:

GitKraken has some of the most robust features of any Git GUI client. Still, the interface is intuitive to use for beginners and experts alike. You can also onboard team members on the platform to collaborate on repositories and projects.

The client even simplifies everyday command line actions. For example, you can undo common actions such as delete branch, commit, remove remote, and discard in one click.

GitKraken offers a free version with basic features. However, you’ll need to upgrade to the paid version to unlock more features. GitKraken pricing starts at $1.95 per user per month.

Overall, it’s hard to fault this GUI client. It delivers on its promise. Furthermore, it offers some of the best command line actions you’d want in such a tool.

Seasoned developers favor Git Cola for its speed and range of features. In addition, the client is surprisingly robust for a free tool. It’s written in Python (v2 + v3) and supports Windows, Mac, Linux, and Ubuntu. 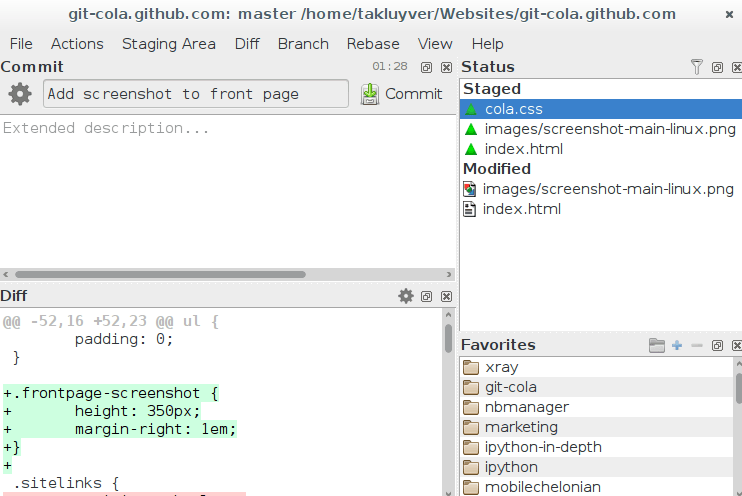 Some of the platforms’ star features include:

The customizable interface is convenient. For instance, you can hide the features you don’t use for a clutter-free interface. The client also remembers your preference, so you only see the tools you frequently use when launching the program.

The client is purpose-built for Linux. It’s an excellent option for developers who primarily use Linux. It’s also an open-source program, so it’s easy to maintain and update.

TortoiseGit is an open-source GUI interface best suited for large DevOps projects in Windows. The client is IDE-independent which makes it incredibly versatile. You can use TortoiseGit for any project, regardless of the development program or file type.

Specifically, TortoiseGit is a Windows Shell UI to Git tool. That means you interact with the program from your Windows Explorer context menu. As a result, the seamless user experience is perfect for beginners getting familiar with Git. 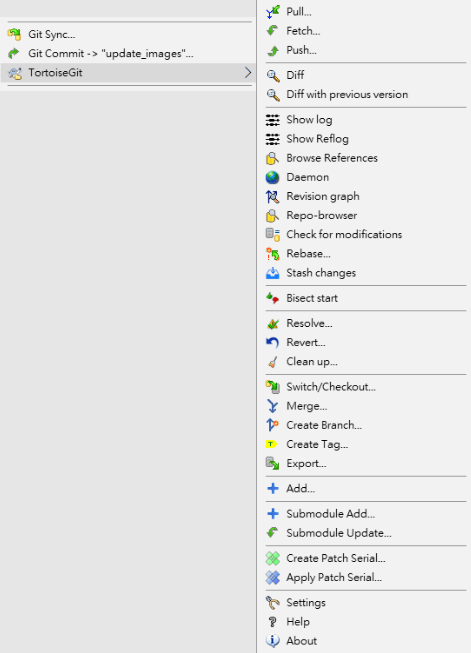 The best part is that TortoiseGit is free to use under a GPL license. The only obvious downside is that the client is limited to Windows. So you’ll need a different GUI client for other operating systems.

However, it’s one of the most capable and intuitive Git clients for Windows users. It’s also surprisingly powerful for a free tool.

How to Pick Your Git GUI Client

As you can see, you have multiple options as far as Git GUI clients. A good GUI client should make your work easier and minimize the need to use your command line. Below are a few steps to ensure you pick the right Git GUI to support your workflow.

The best place to start is with the operating system you’re running. You want to ensure that the client you choose supports your operating system. It will save you the trouble of following up with a tool that doesn’t support your OS, to begin with.

Below is a quick rundown of your options based on the operating system:

Cross-platform Git GUIs work for all major operating systems, including Windows, Mac, and Linux. Your options here include SmartGit, GitKraken, and Git Cola. You can’t go wrong with any of these options.

Furthermore, a cross-platform GUI is critical if you run more than one operating system on your machine. The options we mentioned above are ideally suited for this use case.

Git Clients for Windows OS include:

Git Clients for Mac include:

Git Clients for Linux featured in this review are slightly fewer than the other two operating systems. Your options here include:

It’s also worth considering a purpose-built client if you’re using a single operating system. For instance, TortoiseGit is purpose-built for Windows OS. As a result, you can access the entire client’s functionality from within your Windows Explorer context menu.

Similarly, Git Cola was initially built for Linux. It supports more OS versions today but is specifically suited for Linux. It’s worth taking stock of your OS and matching your Git GUI client to the appropriate version.

GitHub and Bitbucket users have the most choice in this regard. GitHub Desktop is purpose-built for GitHub, so it is arguably the best option for users in this category. Similarly, SourceTree is an Atlassian product that integrates seamlessly with GitHub and Bitbucket.

Start With the Free GUI Clients

Most free software offers only basic features. However, GUI clients appear to be an exception to the rule. There are very functional and robust GUI clients on the market, so you might not need a paid version to perform even complex command-line actions.

For instance, SourceTree, Git Cola, and TortoiseGit are entirely free to use. In addition, some options like TortoiseGit and Git Cola are open source. That means you get more extensive customizations than any paid tool.

The only exception is GitForce. It’s a free tool, but it pales compared to the free clients we’ve mentioned. Otherwise, consider exploring the free tools and testing their features and functionality. Then, you can upgrade to paid clients if you notice specific limitations covered by paid tools.

Git GUI clients are beneficial for simplifying Git workflows. These tools are especially helpful for simple, repetitive commands. However, even the best GUI cannot take the place of the Command Line Interface (CLI).

First, the command line has more functions than any GUI on the market. It provides a direct connection to all your Git tools and functionality. Therefore, some operations can only be performed via the CLI interface.

Furthermore, the CLI is a universal language for coders. It doesn’t matter which Git platform you use. It comes with a command line, making it easier to collaborate and share ideas with other developers, regardless of the environment, machine, or operating system.

Similarly, most Git support forums and communities also offer help and support using CLI terminology. You’ll get help for Git CLI commands more than Git GUI. The latter documentation is only limited to users who adopt the same GUI client.

At the very least, you should be proficient with basic Git CLI tasks like fetching, cloning, and committing. It makes it much easier to understand Git concepts and collaborate with other developers. Then, you can rely on your GUI for more complex tasks like managing branches and rebasing.